Well, the internet connection was down this morning again. Then, as expected, the computer locked up. I could not post this morning, so I edited photos.

Before we get into the procession which led into the 7:00pm Mass, I wanted to share this gem with you, taken by Jeff Williams. Three of the Sisters of the Holy Cross lead the people in the Rosary in the hours before Mass. It was beautiful, how they sang, and even how they recited the prayers, almost in the same tone! 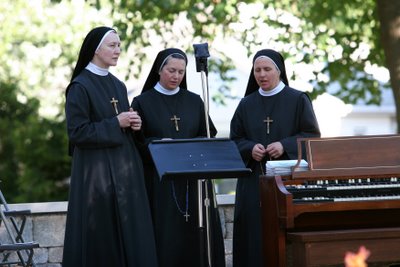 These next four photos were taken by me, and the remaining photos below that were taken by Jeff Williams. Just as I was sitting at my computer the other day, disappointed with how dark all of my procession and subsequent Mass photos were, Jeff's disk arrived and made my day. You will see in this post, the value of more than one photographer. Jeff is about, oh - I'd say 5ft taller than me, and he found a spot off to the side where he could pick up the altar boys after they passed me by. I'm also going to ask Jeff to email me the details of the lens he is using and perhaps some settings if he is willing to share that, or to simply post this info in the combox for those interested.

There is never a shortage of incense, nor altar boys, at Assumption Grotto... 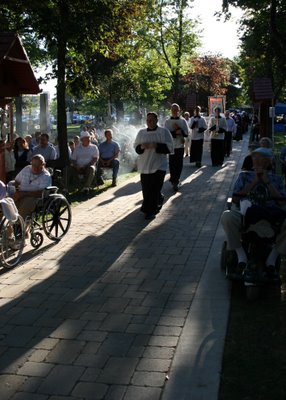 There are also many apostolates and societies and most were represented with banners they had made up. In this photo, the Legion of Mary, which has a pretty strong presence at Grotto, is represented by two parishioners. 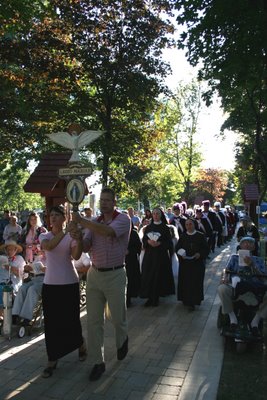 There is also never a shortage of Knights of Columbus at Assumption Grotto. Council 13419 is a fairly large group, and someone can correct me if I am wrong (email or combox), but I believe they are all parishioners of Grotto. Many K of C councils I've been exposed to in the past, were made up of men from many parishes. These guys work their tails off at many events, raising much needed funds for the parish, and they are always there to make special liturgical events even more dignified. Their work is not limited to that which is physical, as they meet for Mass on a given Saturday and personally engage in many other spiritual events and apostolates, and serve on various committees, and work as ushers. 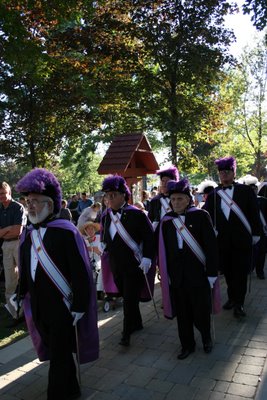 Altar boys in black cassock and white surplice. They are often lined up with the younger ones at the front, and the older, tallest ones at the back, aside from those leading with big candles, incense and the cross. 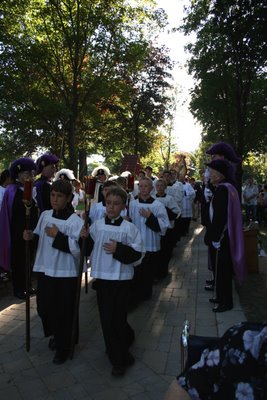 These remaining photos were taken by Jeff Williams and I am very grateful to be able to bring them to you. 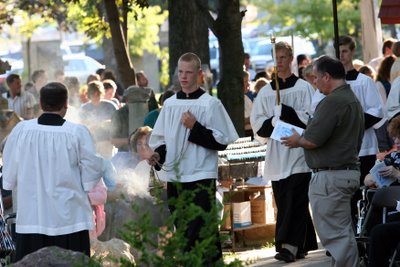 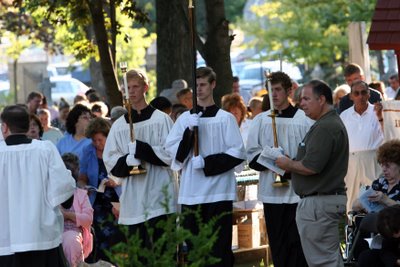 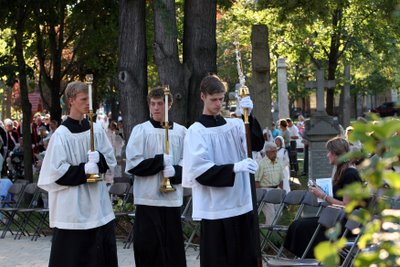 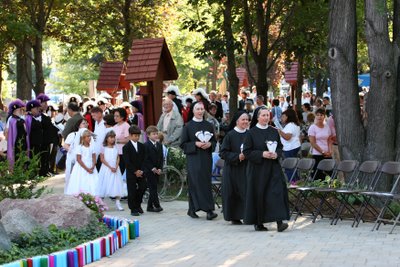 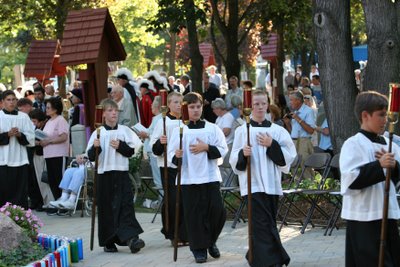 This statue is wheeled in after being beautifully decorated and escorted with the royalty that it represents. For any non-Catholics reading this blog, I would like to explain that we do not worship statues, as many misunderstand. Rather, the statues serve a purpose much like the photos of your children or spouse on a desktop - they lift our thoughts to reflect on them, and lift our hearts to love them. Some mistakenly believe that we worship Mary or adore her. Only God can be adored in a true sense of adoration, and only God can be worshiped. However, we simply pray to Mary in the same way that we would ask any living person to pray for us, or our loved ones, in a time of need. Mary's humility and obedience in scripture gives us much to reflect on when we see her represented in paintings, statues, and icons. 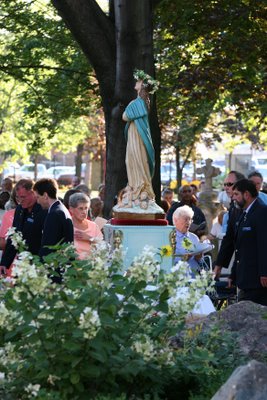 I'll try to post again tomorrow, God willing. These computer problems are mounting and I'm afraid I will soon need to do some kind of overhaul.

A final note about copyrights on this blog. I have no problems with anyone using my photos for backdrops, on blogs, or stored on your computer. Distortions and modifications are not permitted. I own the copyrights for my photos and Jeff Williams owns the copyrights for his photos. Any professional use of photos appearing on this blog, taken by Jeff or myself, requires permission. You may contact me at the email address in my profile.

It is always appreciated, when you post photos on your blog, to kindly provide a link back to this blog, and/or blogpost from which it originated.

Posted by Diane Korzeniewski at 7:08 PM