Wow! Right after I made that last post, and entered this one, in its final stages, into draft, I lost my internet connection due to an area outage, then my modem wouldn't fire back up. This has been happening for two weeks, so if you don't see me posting for a while, you'll know why. Thanks be to God that I was using draft saves.

Remember, that this holy day of obligation fell on a Tuesday - a work day. Yet, the Grotto cemetery was still pretty full with those assisting at this Mass. I could not assist at this Mass, but was able to get up there for some shots during a few key points. In this first photo, you can see Fr. John off in the distance delivering an insightful Assumption Day homily, which I was able to take in as I tip-toed around to get pictures. There were still many more people rearward of this photo, and on the opposite side, out of sight. 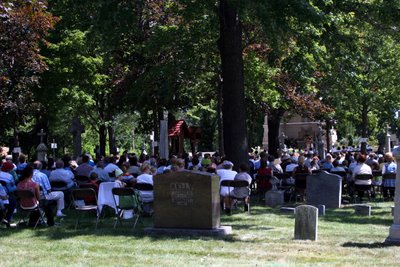 This was taken from a little further back, but there were still chairs rearward of my position. I don't think there is a lens wide enough to capture the entire line which stemmed from 2/3 of the way back, all the way up surrounding the Grotto. 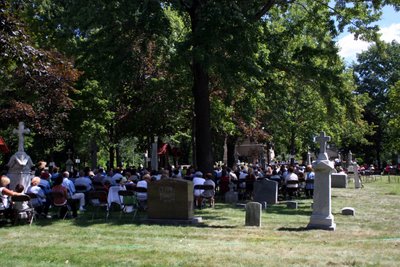 I tried again, but the picture doesn't do it justice in terms of witnessning the number of people who were in attendance. Speakers were all along the path and throughout the grounds so people most everywhere outside could hear what was taking place. This photo also shows how people are keeping within the shade as it was quite hot in the sun, but cool under the trees. 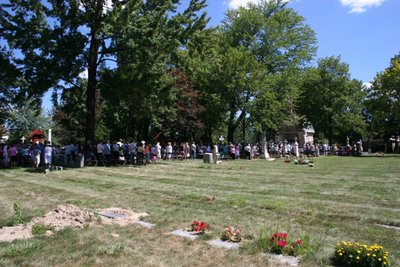 In this photo, I climbed up the rocks during the Credo, and crawled quietly along side the grotto where I snapped off a couple of pictures, attempting to capture the crowd closest to the sanctuary. Once again, you can see how chairs in the sun are avoided due to the heat. 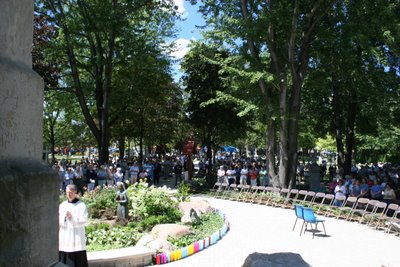 In this photo, from the other side of the grotto, you can see the organist and altar boys, as well. 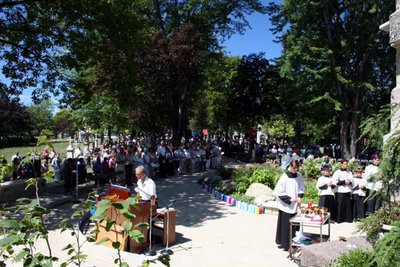 I attempted, again, to capture the depth of the crowd, but it just does not show in any of these pictures. The only way to have captured it, would have been an arial shot. 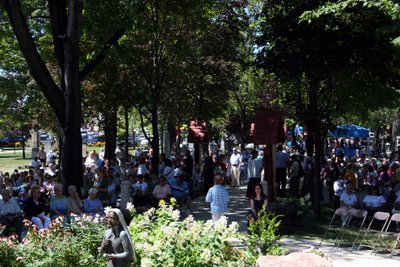 This is from the opposite side, about 1/3 of the way back from the sanctuary. 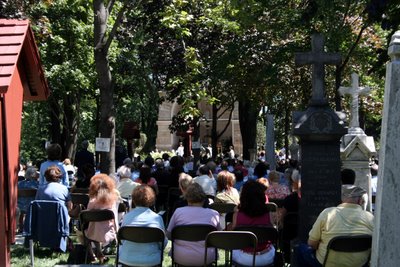 Home
Posted by Diane Korzeniewski at 9:42 AM