The Priests of Opus Angelorum were not able to be with us this year, and they were missed. I know I was not the only one thinking of them on this feast day. It is easy to take their presence for granted and we are truly blessed for the time they do give to us at our parish!

The first Mass I "shot" was the 9:30am Mass in the Church. Being a workday, and being that there are two outdoor Masses - noon and 7:00pm, with fine weather, it is no wonder why this Mass had only about 150 in attendance. There was also a 6:30am Mass that many workers assisted at.

Just a reminder for those who are new to the blog, you are seeing photos from a Latin Novus Ordo Mass at Assumption Grotto in Detroit, celebrated ad orientem (to the east, and in simpler terms - facing the wall altar). Also, with this new template, please note that gold colored text indicates a link.

This is the altar on the Feast of the Assumption of the Blessed Virgin Mary. The altar cloths match the beautiful chasuble used on this day. I put my trust in Her to help me capture photos worth remembering. 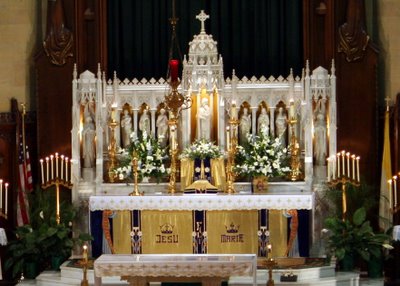 I took this as I listened to Fr. Perrone's outstanding homily, which I was glad to hear again at the 7:00pm Mass. Hopefully, within the next week, I will be able to bring that homily to you here on this blog. It should be available on the parish website soon, as well. 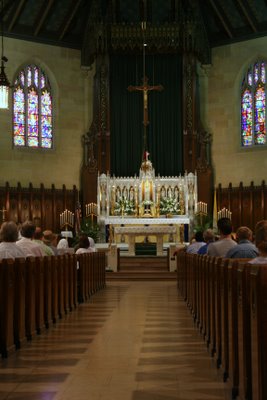 Backing up a bit, this was taken as we sung the Gloria in Latin. 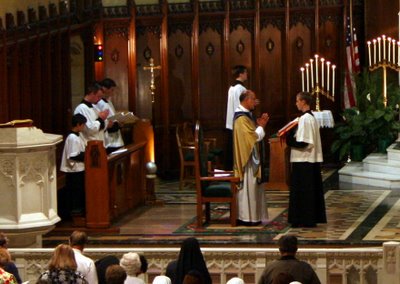 And, this was taken during the Credo at the point of "Et Incarnatus est...." (ref GIRM 275) . We are lucky to have completed this with organ. I had turned the fan on to cool myself off after unpacking my car just before Mass, but had it turned towards the organist. I go up to the organ to see which Credo he is singing, and he tells me to shut the fan as he smiles. With my 50% hearing-loss in both ears, I'm thinking he said something else. Then he motions me again, but this time I see his note pages flipping. Lucky for me that he has a good sense of patience. It must have been like having one of the kids around! 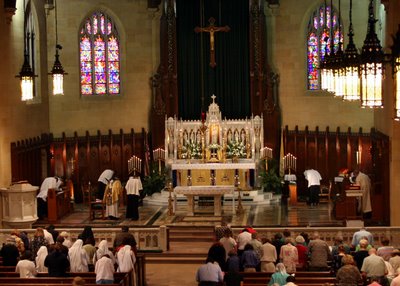 And, of course there is always incense at Assumption Grotto during many of the Latin Masses, including the 9:30am Latin Novus Ordo. You can click on any photo, including these below, to enlarge.

Note: Depending on when you receive or find a link to this page, you may want to hit the homepage to see more on Assumption 2006. There will be many photo posts of this daylong event at Assumption Grotto in Detroit. If you stumble upon this much later, explore the August 2006 archives for the full collection.

Why use incense? Where does it come from? Fr. William Saunders answers these questions, but I would like to answer the "why" here, by referencing his response:

The purpose of incensing and the symbolic value of the smoke is that of purification and sanctification. For example, in the Eastern Rites at the beginning of Mass, the altar and sanctuary area were incensed while Psalm 50, the "Miserere," was chanted invoking the mercy of God.

The smoke symbolizes the prayers of the faithful drifting up to heaven: the Psalmist prays, "Let my prayer come like incense before you; the lifting up of my hands, like the evening sacrifice" (Psalm 141).

Incense also creates the ambiance of heaven: The Book of Revelation describes the heavenly worship as follows: "Another angel came in holding a censer of gold. He took his place at the altar of incense and was given large amounts of incense to deposit on the altar of gold in front of the throne, together with the prayers of all God's holy ones. From the angel's hand, the smoke of the incense went up before God, and with it the prayers of God's people."

Well, blogger has stopped letting me upload photos, so I will bring you more tomorrow, provided I can upload them. I'm trying to go chronologically through the day, and will lead up to the highly celebratory, outdoor, evening Mass.

Just a reminder: I will make as many posts as is necessary so check back daily as I spread out samples throughout the next week, or longer.

Posted by Diane Korzeniewski at 7:30 PM