St. John Vianney, Humble in all Things
O holy Priest of Ars, your life was filled with humility. You wore an old cassock. You ate meager meals. You realized that before the throne of God, you were one of His creatures made to glorify God and praise Him in all things. You said that the “first virtue is humility; the second, humility; and the third, humility.” You counseled people to remain humble, remain simple and the more one is so, the more good he will do. Your simplicity of soul and your uncluttered way of life led you to sanctity. O humble St. John Vianney, when Father _____________________ forgets he is totally dependent on God for everything, intercede for him with Almighty God, to allow him to see that without His Creator nothing is possible and that he must rely on God for everything. He is his Creator, who keeps him in existence at every moment. Obtain for Father __________________ the grace of humility. May his life exemplify your humility and simplicity, a life uncluttered, a life totally dependent on God. Recite the Novena Prayer.

Novena Prayer
O holy Priest of Ars, St. John Marie Vianney, you loved God and served Him faithfully as His Priest. Now you see God face to face in heaven. You never despaired but persevered in your faith until you died. Remember now the dangers, fears and anxieties that surround Father ___________________ and intercede for him in all his needs and troubles especially console him in his most difficult moments, grant him serenity in the midst of crisis, and protect him from evil. O St. John Vianney, I have confidence in your intercession. Pray for Father ____________________ in a special way during this novena. 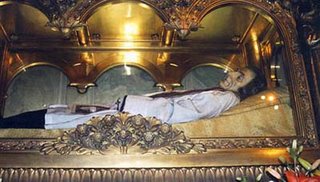 This is the body of St. John Vianney - the Cure d'Ars, as he lays in his resting place. Keep in mind, he died on August 4, 1859. There are websites, such as the one I'm linking to, that focus on the incorruptibles and their significance. Some of the photos are a bit hard to take, like the head of St. Catherine of Sienna. I would rather remember her in a more dignified way. The one of St. Bernadette is beautiful, as are some others. From livingmiracles.net, we learn some details on St. John:

I'll get you started here on the subject of incorruptibles, as it begins on livingmiracles.net, then let you jump there to see more photos and read more discussion on it:

Through history, the bodies of a considerable number of deceased Catholic Saints and other blessed persons, have not undergone the normal processes of disintegration. Without any kind mummification or embalming methods, their corpses have thus remained incorrupt, a few even after 1500 years. The accounts of incorruptible bodies are a part of Christian history from the first century right through to the 21st.

Many of those, whose bodies have been found incorrupt, had died either by violence or diseases, conditions which normally would encourage the disintegration processes rather than preserve the bodies. Some had been buried in close proximity to other bodies that decomposed normally. Some had been consigned to the bare earth. Others survived burial in such damp conditions that their clothes rotted off their intact bodies. Some had been lying in lime, water or left in the open. But apparently unaffected by exterior influences, the bodies were found preserved as if they were still alive.

If you want to read more, there is a book by Joan Cruz on the subject.

Posted by Diane Korzeniewski at 5:07 AM