Some final reasons to come to Assumption Grotto on August 15!

This marks my last photo post with pictures of last year's Feast of the Assumption of the Blessed Virgin Mary at Assumption Grotto Parish in Detroit.

Several Grotto-going photographers will be working this year's event, and I hope to bring you samples of their fine work, as well. Each has a gift, from ability to get fine background and crowd shots to those creamy closeups. Come back daily over the next week or two as the main purpose of my blog takes front and center stage. That is, the living log, in pictures, of devout sacramental, Eucharistic, and Marian life at Assumption Grotto Parish in Detroit, Michigan. For this reason, most news and other commentary will take a back seat so that this blog may satisfy its primary purpose!

The focus of this last post meant to entice you to spend Assumption at Assumption Grotto, is the evening Mass, which begins at 7:00pm. You really want to get there a couple hours beforehand as parking will be difficult, and shuttles will undoubtedly be full.

This picture was taken during the readings. All look on as the Deacon brings us the first reading of the day. 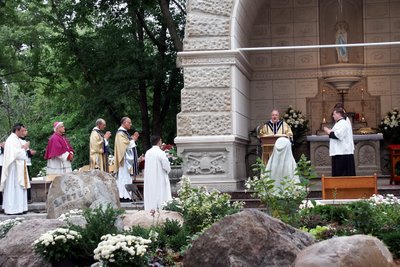 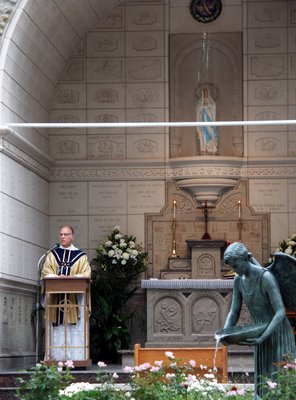 This made the Mass a little longer than the usual 1.5 hours. Bishop John M. Quinn had come to bless the newly installed statues. And, I do mean newly installed. They were put in and finalized like a day or two before, along with the surrounding garden. 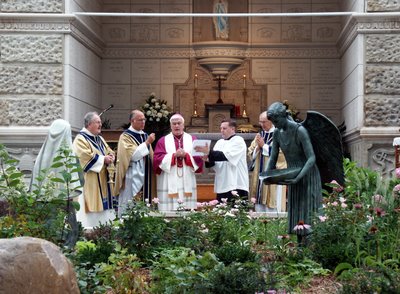 Fr. Perrone, concelebrants, Bishop Quinn, and altar boys during the elevation of our Lord 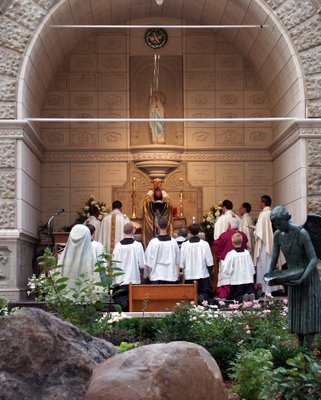 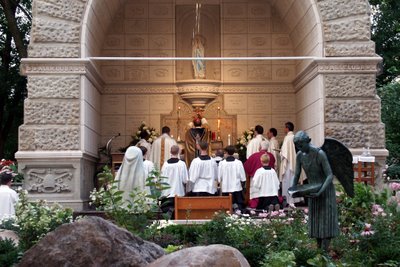 Bishop Quinn in a moment of solitude as priests deliver Holy Communion to the Masses. As is typical at Assumption Grotto, no EMHC's are necessary with the many priests who assist at such events. It may take a little longer than some places, but Grotto-goers are not concerned with how long Mass takes and enjoy the small amount of extra time that they get to remain in quiet reflection after receiving Jesus. Vessels are purified during the Mass too, with several of the priests in attendance assisting in this task. 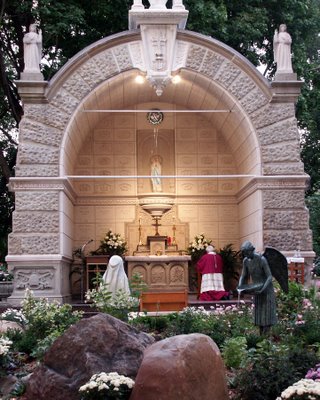 Immediately following Mass, Fr. Perrone kneels in the grotto sanctuary and consecrates the parish to the Blessed Mother. This follows more than one opportunity for people to consecrate themselves to Her throughout the day. Many had been preparing using the 33-day preparation for Consecration to Jesus Through Mary according to St. Louis de Montfort. The candles seen glowing in the foreground, had been placed there all day long by the masses of people coming from early morning until just before Mass. They will glow all week long in the cemetery, giving it the most beautiful appearance in the evening hours in darkness. 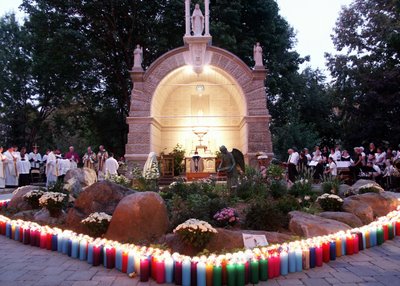 Following the procession which wound its way through the Grotto Cemetery and back to where it all started, Fr. Perrone led the crowd of 700-1000 in a litany of Marian songs for another 15 minutes. The songs Fr. Perrone led us in were just off-the-cuff, and the musical prayer enveloped the surrounding air in a way that would move any casual visitor to tears. Then, Bishop Quinn, nearly speechless by the experience, addressed the crowd who warmly received his kind expressions of gratitude.

I had a chance to walk out along side Bishop Quinn, as he spoke to many of the faithful. People told him how moving this was for them, and he mirrored their awe at the beauty of the celebration. I also sent him a package with a testimonial of how Grotto has sustained my conversion from lukewarmness, along with several of the photos seen in this post. I received a postcard back from him a short time later, acknowledging the photos and once again iterating just how moving the display of faith was for him.

It is not known whether Bishop Quinn will make it back this year or not. If he cannot make it, I have a feeling he will be reminiscing the Feast of the Assumption at Assumption Grotto in Detroit.

A final word about the crowds. While the 7:00pm Mass may have had 700-1000 by estimate, this figure does not include far greater numbers of the faithful who had come throughout the day for other Masses and devotions. Me and my fellow photographers will attempt to show the crowds this year. Consider that last year the actual celebration of the feast was shifted to Sunday since it fell on a Monday and people were not obligated in the least to come on August 15, when all of this took place!

See the details for the day, including those pertaining to events and free shuttle service to/from De LaSalle High School in Warren.

Posted by Diane Korzeniewski at 8:50 AM