At the bottom of this post, see a complete string of previous links for Assumption 2006 Photo Posts. Check the home page as there will be many additional posts following this one in the coming days.

Conclusion of the 9:30am Mass

Even the exit of priests and altar boys is graceful at Assumption Grotto. I'm 44 and grew up with friendly priests who greeted people with a friendly smile on their way to and from the sanctuary.

When I first came to Grotto, something was strikingly different: The priest was standing at the back a few moments before Mass began and was visibly deep prayer. Upon seeing him in prayer, my immediate thought was, "oh, that's where I should be too". An altar boy was swinging the thurible slowly and 12 others were lined up looking forward quietly. Gregorian Chant began, and I just slipped into even deeper prayer as the priest, and the boys, headed solemnly to the sanctuary. When they do not process from the back, they enter from the sacristy to the right of the picture, and they exit just as quietly to the same. No fanfare, just quiet, meditative exits, and a church much quieter than I had ever experienced prior to Grotto. I was inclined to drop back down to my knees for 10 minutes following Mass along with the many others who did the same.

You can see such an exit here. They line up, genuflect in unison, and as the celebrant remains in place, all of the altar boys process back into the sacristy, and after the last has passed the priest, he follows. Movement may blur some of these, but you get the idea. 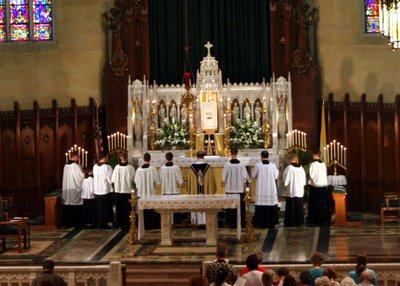 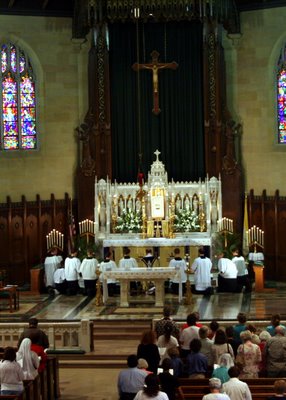 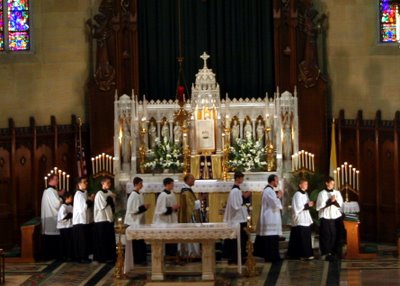 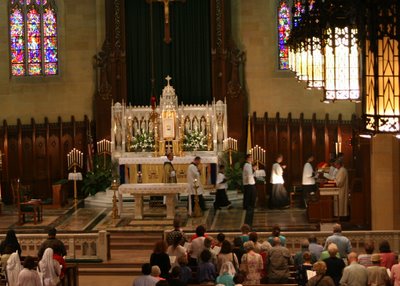 Following the 9:30am Mass several things took place. In this photo, Fr. John, the associate, is leading people through the Total Consecration to Jesus through Mary. There was another opportunity following the noon Mass. 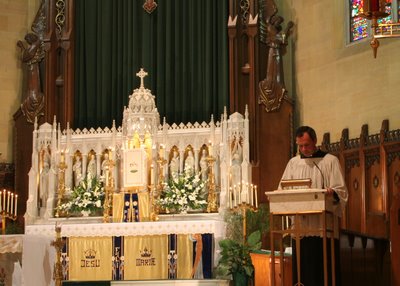 I'm having many cable problems, leaving me without a connection, often at the only time I have a few minutes to post. It's been going on for days. If I do not post on a given day, it is likely due to no connection.
Posted by Diane Korzeniewski at 6:03 AM