Off Topic: Update on Baby Sparrow

If you read my early morning post today, you'll see that I'm in possession of a 24-48 hour old sparrow which dropped about 8 feet onto the cement outside of my condo.

I had to run to the drugstore for some medicine for myself and on my way, I dropped into a pet shop near my home. Denise, bird expert and owner, agreed to take him from me around 6:00pm tonite, if he is still alive. Just as I am assuming, she says this little guy has a very likely chance of dying sooner than later. Even if he hasn't sustained internal injuries, it is rare for birds this age to survive. It is difficult to feed them, and easy to get food into their respiratory system. They must be kept warm, but not hot.

My little feather-less friend is still eating and Denise gave me some powdered baby bird formula to mix with water for him to eat. She explained how they eat and from her standpoint, everything that I was concerned with, she said was normal. The red, bloody appearance under the belly skin she said was simply left over from hatching, along with that big pot-belly. All limbs are moving and retract fine, and there is nothing wrong with his neck. Reflexes seem good.

However, his lethargy concerns me. I suggested that if it was not due to internal injuries or sickness, maybe I wasn't giving him enough to eat. Well, I got him to eat quite a bit, but stopped so he wouldn't be too full. He ate probably about 1/4 - 1/3 teaspon and I do this about every 20-30 minutes with a syringe. According to Denise they do sleep alot at this age, but he doesn't beg for food like he did this morning. Hopefully, he's just delayed.

Here is a picture I tried to upload to go with the other one. Both were taken at 4:30 this morning (scroll down to see original post and pic). 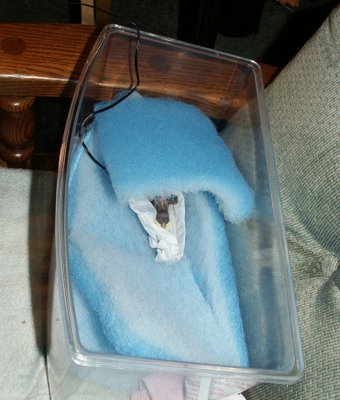 His feathers are coming in literally before my eyes. Hour to hour he changes. I always wondered how they could be fully feathered in under a week when born bald. Well, he's growing them before my eyes.

I just took this pic a few minutes ago on my camera's macro setting. What is different from last night or even 4:30 this morning are all those specs on the bald area. Those are feathers coming in. That was barely visible last night and now it is easily seen. 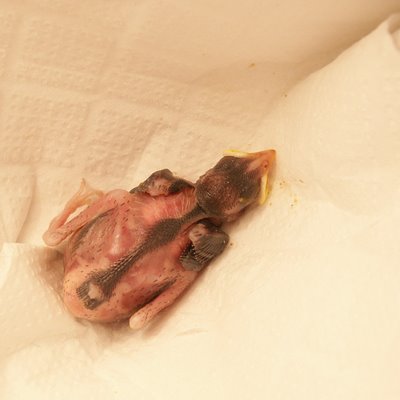 If he survives, I'll try to stop in by Denise daily and take pictures of his development.
Posted by Diane Korzeniewski at 12:27 PM