Holy Mass on the Feast of the Sacred Heart

I am able to bring you some photos of the Mass which took place at 7:00pm at Assumption Grotto. Considering that it was not a holy day of obligation, attendance was good at about 75-100 (including about 25 in the choir loft). People had two other Masses to choose from - the 7:30am and 8:30am, as with any weekday. Quite a few choir members were out or away, but we did ok considering a last minute switch in the music to accomodate the lower numbers.

There is something about this scene when you are in the church. The lights are out, and the only light you see is within the sanctuary, or daylight peaking through the stained glass. This is the finest setting for mental prayer, or any kind of prayer. The picture was taken at around 6:15pm as I was setting up before choir practice. 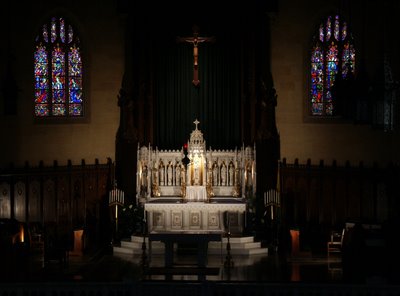 Mass begins. The celebrant is wearing the Sacred Heart on his vestment. 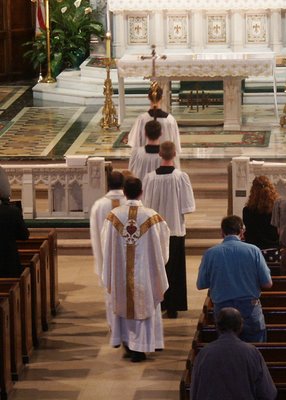 "Et incarnatus est..." Bowing is explained in a previous post. 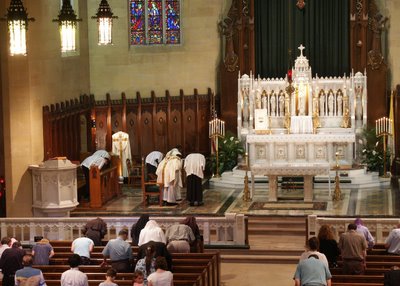 Altar boys assisting the priest as we head into the Eucharistic Prayer. 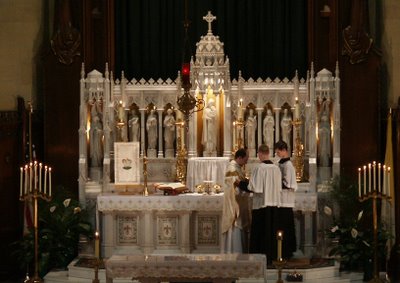 More pictures tomorrow or Sunday, including the ever-beautiful, "Elevation". We were blessed to have Benediction outdoors, just as we do on Sundays, but it was geared towards the Sacred Heart. I'll be bringing pictures of that, as well, in the coming days.

I should probably have mentioned that if you ever come to an evening feast day Mass, it is likely going to be celebrated mostly, or partially, in Latin. If you are not aquainted with Grotto, there are little gray Mass booklets which guide you through the Mass, and solid translations are on the opposite page. If you see a little, white, rectangular basket on the altar rail near the center on either side, they are in there, and sometimes on the stand where the gifts are placed in the center aisle. Follow along as it can be an eye-opening experience if you glance back and forth at the good translations on the facing page as you read the Latin.

I must admit, that the words of the Eucharistic prayers used (there are 4), but I have never paid attention to them, until I started attending the Latin Mass and reading along, while glancing at the opposite page. Soon you start to connect certain words with meanings, as well. But, I began to dive deeper into the Mass, aided by the need to read what was going on.

I can understand how some would prefer not to have to work so hard to know what is going on and have everything in the vernacular. However, can you imagine being in an international setting, with dozens of ethnicities and nationalities present, all capable of singing the Pater Noster in Latin?

Posted by Diane Korzeniewski at 10:49 PM