One thing that jumped out at me when I first came to Assumption Grotto last year, was how incense is used each Sunday at the 9:30 Latin Novus Ordo. This isn't just the priest putting something into the thurible - the incense burner - and making a few swings. Rather, incensing at Grotto is artfully reverent, adding to the "sense of the sacred" experience found there. The altar boys work with precision throughout the Mass.

This post not only brings you pictures of some of the incensing, but a great Q & A reply just recently from Fr. McNamara, who answers most of the questions on liturgy at Zenit.org. I cannot link directly to the article, but it can be found under "Liturgy" in the sidebar, with the date and code shown below. I'll paste the whole thing in as it was very interesting. Grotto-goers especially will be able to relate to what is written, but I'm going to break up the reply with photos from various Masses. These include Holy Thursday and the Easter Vigil of 2006 (Fr. Perrone), The Spirit of the Liturgy Conference (Fr. Joseph Fessio), and the Marian Catechist Conference (Archbishop Raymond L. Burke)

It's one more way that Assumption Grotto uses many options within the Norms that won't be seen in most parishes today. The references Fr. McNamara uses come from the General Instruction of the Roman Missal (GIRM) and a link can be found in my sidebar. 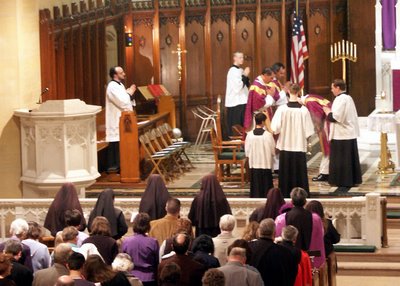 And More on Enthronement of Gospel

Q: Are they any indications concerning the movement of the thurible when incensing the Host; the altar at the beginning of the Mass; at the preparations of the offerings; bishops, priests and the people? In various churches there are different styles concerning the times the thurible is raised or turned around the offerings. -- J.M., Seville, Spain

A: Most indications regarding how to incense are contained in the General Instruction of the Roman Missal and in the Ceremonial of Bishops. The GIRM specifies:

"276. Thurification or incensation is an expression of reverence and of prayer, as is signified in Sacred Scripture (cf. Ps 141 [140]:2, Rev 8:3). Incense may be used if desired in any form of Mass:

"a. During the Entrance procession;
"b. At the beginning of Mass, to incense the cross and the altar;
"c. At the Gospel procession and the proclamation of the Gospel itself;
"d. After the bread and the chalice have been placed upon the altar, to incense the offerings, the cross, and the altar, as well as the priest and the people;
"e. At the showing of the host and the chalice after the consecration.

"277. The priest, having put incense into the thurible, blesses it with the sign of the Cross, without saying anything.

"Before and after an incensation, a profound bow is made to the person or object that is incensed, except for the incensation of the altar and the offerings for the Sacrifice of the Mass. 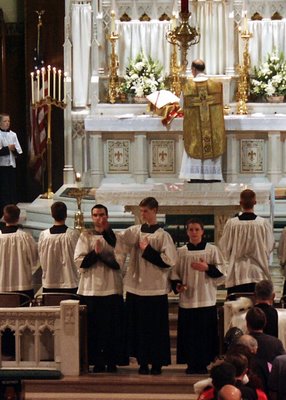 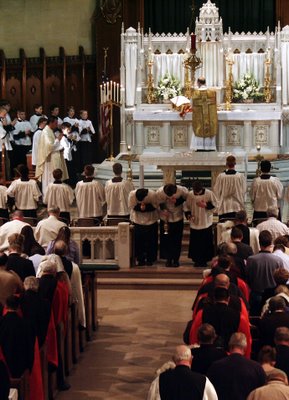 "The following are incensed with three swings of the thurible ["Ductus," or three double swings as explained below]: the Most Blessed Sacrament, a relic of the Holy Cross and images of the Lord exposed for public veneration, the offerings for the sacrifice of the Mass, the altar cross, the Book of the Gospels, the Paschal Candle, the priest, and the people.

"The following are incensed with two swings of the thurible: relics and images of the Saints exposed for public veneration. This should be done, however, only at the beginning of the celebration, after the incensation of the altar.

"The altar is incensed with single swings of the thurible in this way:

To these general indications for Mass, the Ceremonial of Bishops (Nos. 84-98) adds further details. Incense is used:

-- for the rite of the dedication of a church or altar.

-- at exposition of the Blessed Sacrament when the monstrance is used.

-- during solemn processions such as the feast of the Presentation, Palm Sunday and Corpus Christi.

-- during the singing of the Gospel canticle at solemn Morning or Evening Prayers.

The ceremonial further notes that only the bishop may put incense into the thurible while seated and that the Blessed Sacrament is incensed from a kneeling position. 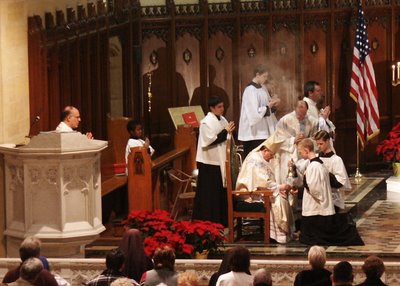 [Note closely: As Archbishop Burke elevates the Blood of Christ, the center altar boy, kneeling, is swinging the thurible as another altar boy lifts the chasuble. If the chasuble were heavy, as they once were, this would enable the priest to easily lift the body and blood in elevation. Today, it may be more ceremonial and adds to the grace] 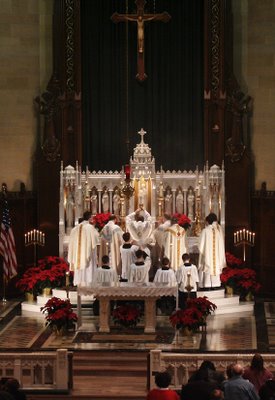 Where customary a head of state in official attendance at a liturgical celebration is incensed after the bishop.

It also adds several footnotes taken from the 1886 edition of the ceremonial regarding the manner of approaching the bishop, recommending placing three spoonfuls of incense into the thurible, and describing the manner of holding the thurible. For example, footnote 75 states:

"The one incensing holds the top of the censer chain in the left hand, the bottom near the censer in the right hand, so that the censer can be swung back and forth easily. The one incensing should take care to carry out this function with grave and graceful mien, not moving head or body while swinging the censer, holding the left hand with the top of the chains near the chest and moving the right arm back and forth with a measured beat."

To these official documents we may add the indications offered by Monsignor Peter Elliott in his excellent ceremonies book:

"216. The grace and skill of using the thurible depends first of all on how the chains are held when incensing a person or thing. Each person should work out what is most convenient by practice, but an easy method may be proposed. (a) Take the disc and the upper part of the chains in the left hand, letting it rest against the breast. With the right hand, let the chains pass between the index and middle finger. Secure them by the thumb, so that the swinging bowl of the thurible may be directed and controlled easily. (b) With the right hand, bring the bowl in front of the breast. Then raise the right hand to eye level (lower when censing an altar) and move the bowl backwards and forwards towards the person or object, swinging it steadily and smoothly without haste by manipulating the chain. (c) Having completed the required number of swings, lower the bowl once more. Then bring it to your side or return it to the thurifer or deacon.

"217. There are two kinds of swing or "ductus." To make a double swing, the thurible is swung twice at the person or object to be incensed, and then lowered. To make a single swing, it is swung once and then lowered, except when incensing the altar, when these single swings are made continuously as the celebrant walks around it.

"218. The customary rules governing these different forms of incensation are as follow: (a) three double swings are made to incense the Blessed Sacrament, a relic of the Cross, images of Our Lord set up for veneration, the gifts on the altar, the altar cross, the Book of the Gospels, the Easter candle, the celebrant (bishop or priest), a representative of the civil authority officially present at a celebration, the choir, the people and the body of a deceased person; (b) two double swings are made to incense relics or images of Our Lady and the saints set up for veneration. The altar is incensed by single swings. In procession, the thurifer swings the thurible at full length from his right hand. In his left hand he carries the boat against his breast, but his left hand rests flat on the breast if there is a boat bearer.

"219. It is not necessary to let the bowl strike the chains. When incensing a person or the gifts on the altar, the chains should be held about 20 cm. (8 inches) from the bowl; about 30 cm. (12 inches) when incensing the altar and cross. Before and after an incensation, a profound bow is made to the person who is being incensed. While bowing before and after incensing a person, the thurifer lets go of the thurible with the right hand, which is placed on the breast.

"220. In placing incense in the thurible, the amount used ought to be governed by such factors as the size of the church. However, the sign of incense rising is achieved only if the grain or powder is evenly arranged on burning coals. Striking or breaking the coals with the spoon does nothing but dislodge the grains and swinging a thurible which does not produce smoke is ridiculous."

Hey, Fr. Perrone even used incense at the Call to Holiness Conference at the Sterling Inn hotel. Along with the incense, the fire alarms signaled the Elevation of the Lord as the smoke set them off. 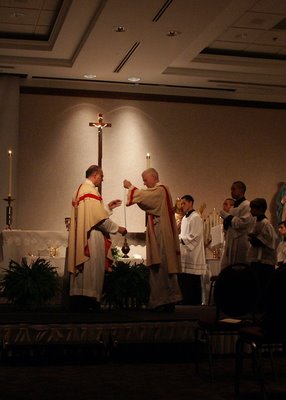 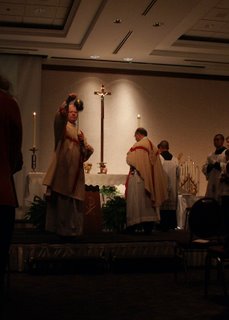 Posted by Diane Korzeniewski at 6:31 AM