Before I bring you the subject of this post, I want to point out that there will be an Orchestral Mass at the noon Mass at Assumption Grotto this Sunday. Following that Mass, will be processions to the outdoor altars on the grounds.

On to the topic:

The more I hear Fr. Cantalamessa talk through his writings, the more I understand why Pope Benedict would want him to be the "Preacher of the Pontifical Household".

Zenit.org brings us his address regarding the Feast of Corpus Christi. I cannot find a way to link directly to this article at Zenit, so I am pasting it all here. You can go to their website and click on the 6/16/06 date. I don't know how long it will be there. But, if you bookmark the link associated to his name above, you'll be able to probably follow his writings and talks there.

I have highlighted key parts in a different color that struck me as rare to hear many pulpits today. Perhaps if it were, the confession lines would be as long as the Communion lines!

ROME, JUNE 16, 2006 (Zenit.org).- Here is a translation of a commentary by Capuchin Father Raniero Cantalamessa, preacher to the Pontifical Household, on the Gospel reading of the liturgy of the feast Corpus Christi. 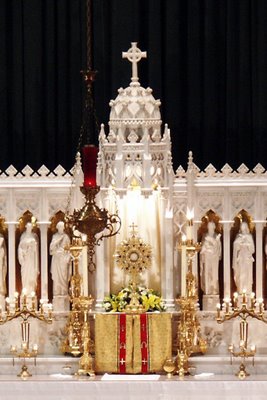 In Your Midst Stands One Whom You Do Not Know!

I believe that the most necessary thing to do on the feast of Corpus Christi is not to explain some aspect of the Eucharist, but to revive wonder and marvel before the mystery.

The feast was born in Belgium, in the early 13th century; Benedictine monasteries were the first to adopt it. Urban IV extended it to the whole Church in 1264; it seems that he was also influenced by the Eucharistic miracle of Bolsena, venerated today in Orvieto.

Why was it necessary to institute a new feast? Doesn't the Church recall the institution of the Eucharist on Holy Thursday? Doesn't she celebrate it every Sunday and, more than that, every day of the year?

In fact, Corpus Christi is the first feast whose object is not an event of the life of Christ, but a truth of faith: His real presence in the Eucharist. It responds to a need: to solemnly proclaim such faith.

It is needed to avoid the danger of getting used to such a presence and no longer pay attention to it, thus meriting the reproach that St. John the Baptist made to his contemporaries: "In your midst stands one whom you do not know!"

This explains the extraordinary solemnity and visibility that this feast acquired in the Catholic Church. For a long time, the Corpus Christi procession was the only procession in the whole of Christendom, and also the most solemn.

Today processions have given way to manifestations and sit-ins (generally of protest); but although the exterior form has declined, the profound sense of celebration and the motive that inspired it remain intact: to keep alive the wonder before the greatest and most beautiful of the mysteries of the faith.

The liturgy of the feast faithfully reflects this characteristic. All its texts (readings, antiphons, songs, prayers) are suffused with a sense of wonder.

Many of them end with an exclamation: "O sacred banquet in which Christ is received!" (O sacrum convivium). "O victim of salvation!" (O salutaris hostia).

If the feast of Corpus Christi did not exist, it would have to be invented. If there is a danger that believers face at present in regard to the Eucharist, it is to trivialize it.

There was a time when it was not received so frequently, and fasting and confession had to precede it. Today virtually everyone approaches it. Let us understand one another. It is progress; it is normal that participation in Mass also implies Communion; that is why it exists. But all this entails a mortal risk.

St. Paul says: Whoever eats the bread or drinks the cup of the Lord unworthily, will be guilty of the Body and Blood of the Lord. Let each one examine himself and then eat the bread and drink the cup, because he who eats and drinks without discerning the body, eats and drinks judgment unto himself.

I believe it is a salutary grace for a Christian to go through a period in which he fears to approach Communion, that he tremble before the thought of what is about to occur and not cease to repeat, as John the Baptist: "And you come to me?" (Matthew 3:14).

We cannot receive God except as "God," that is, respecting all his holiness and majesty. We cannot domesticate God!

The preaching of the Church should not fear -- now that communion has become something so habitual and "easy" -- to use every now and then the language of the letter to the Hebrews and to tell the faithful: "But you have come ... to a judge who is God of all ... and to Jesus, the mediator of the new covenant, and to the sprinkled blood that speaks more graciously than the blood of Abel" (Hebrews 12:22-24).

In the early times of the Church, at the moment of communion a cry resounded in the assembly: "Let him who is holy approach, let him who is not repent!"

One who did not get used to the Eucharist and spoke of it with overwhelming wonder was St. Francis of Assisi. "Let humanity fear, let the entire universe tremble, and the heavens exult, when on the altar, in the hands of the priest, is Christ, son of the living God. ... O admirable rapture and amazing designation! O sublime humility! O humble sublimity, that the Lord of the universe, God and son of God, so humbles himself as to hide under the small appearance of bread!"

However, it must not be so much the grandeur and majesty of God which causes wonder before the Eucharistic mystery, but rather his condescension and love. The Eucharist above all is this: memorial of the love of which there is no greater: to give one's life for ones' friends.

Yes, Fr. Cantalamessa, and that is why we love the Mass at Assumption Grotto so well. It reminds us that Jesus is not just a friend, but he is God - the same God before Whom Moses removed his sandals. If we only spent a little more time with the Blessed Sacrament - leaving behind, if only for a moment, our petitions in favor of pure adoration just because.....He is God!

The "domestication" this fine priest speaks of is visible in so many parishes today, where you feel out of place if you dare to genuflect, knee to the floor.

Posted by Diane Korzeniewski at 8:15 PM