Bishop Bruskewitz on Call to Action

About 50 people demonstrated outside St. Mary’s Catholic Church and School Saturday afternoon, calling for greater openness and inclusiveness in the Roman Catholic Church.

The event concluded the 10th anniversary conference of Call to Action Nebraska, part of a nationwide organization seeking reforms in the church.

In 1996, Lincoln Bishop Fabian Bruskewitz announced that local Catholics who joined Call to Action would be excommunicated. Lincoln is the only diocese in the country to impose such sanctions, said Rachel Pokora, president of Nebraska CTA.

About half of those participating in Saturday’s “non-violent action” were CTA members from other parts of the country, while the rest were from Nebraska. Many carried placards naming important issues facing the church or reforms the group supports, such as allowing priests to marry, permitting women to be priests and perform other leadership roles in the church, combatting poverty, supporting peace and inclusion of gays and lesbians.

Bruskewitz issued a statement reiterating his opposition to Call to Action, calling it “an anti-Catholic sect composed mainly of aging fallen-away Catholics, including ex-priests and ex-nuns.” Call to Action opposes church teachings “on a variety of issues, such as abortion, homosexuality, abandonment of marital and religious vows, and so on.”


We couldn't agree more, Bishop Bruskewitz. I wonder if the Elephant in the Living Room is on his hit list. Just a reminder: The Te Deum Laudamus blog is an Elephant Free Zone. 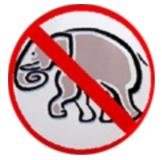 Posted by Diane Korzeniewski at 7:31 AM