Off Topic: Baby Sparrow Falls from the Heights

Well, I have to step away from liturgical talk to share something rather new that is going to be taking my time away, as long as the good Lord desires. 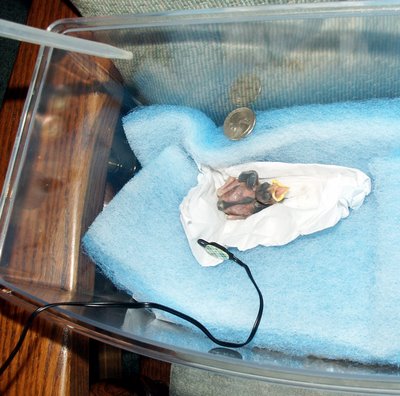 I came home from work, and walked into my condo door. A few moments later, my brother stopped over and told me that there was a baby bird on the cement just outdoors. Now, the birds have a habit of building a nest inside of a bathroom vent that is inaccessible to us. Now and then, we find dead, featherless birds on the cement. They usually die instantly because they drop to the awning, then roll down all along it before finally plunging some 8 feet down to hard cement. Apparently, the nest is too close to the end of the vent and some just fall out.

As I went out to pick him up and bury him, he was still breathing. I pondered whether I should euthanize him or not. It wasn't good to leave him on that hot cement and the bugs were crawling all over him. It was just an unmerciful scene.

I then figured he probably had broken bones and internal injuries and would likely die shortly anyway, so I took him over to the base of a tree where there was a cup shape of grass. I placed him in it. 30 minutes later it got the best of me. Figuring I'd find him dead, he picked his little head up. That was it. I had to bring him in.

I figured I was just bringing him in where he could die in peace, without bugs crawling all over him. But he was ice cold now, having been under that tree with no warmth in the shade. I took him in and stood with him in front of an electric heater a few minutes and he come to life. I then a letter opener and just dipped it into some sugar water. Concerned that he was dehydrated, I nudged at its beak and the drop fell against his mouth. Apparently it went in because I saw him swallowing next. I did this a few more times.

He was already breathing very heavily when I found him leading me to believe he had internal injuries, and possibly blood in his lungs. I seen what appeared to be blood under his delicate skin and figured by morning he would be gone. But, I went out and got baby food - chicken and beef - after reading that sparrows need animal protein and finding it recommended on a website. I put him under a lamp, then put something dark over it so it would simulate night.

Well, I got up at 4:30 this morning as usual, went in the other room thinking I'd find he had left me, only to find that when I moved the tissue, he popped his head, and opened his little eyes which had been completely closed the day before, and threw open that mouth with vigor!

Using a dropper and a little water mixed in with the baby food, he took about 4 drops. A few minutes later, he soiled the tissue pretty hefty way - a good sign. I've been feeding him every 20 minutes or so, with just a few drops of beef baby food. Then he goes into a deep sleep.

The little guy is still breathing very heavy. My suspicion is that he has blood or fluid in the lungs from the fall, or pneumonia from getting chilled, which I had read happens easily. The food I'm feeding him could also get into his lungs - it is a very delicate process.

Because he needs to feed every 20-30 minutes right now, I will have to take him to work with me and hope no one makes a fuss. I'm going to make some calls and find out if there are any volunteer rehabers. If he survives all of this, which is highly unlikely, he will have full feathers in a few days, and in less than a week could be in a bird cage beginning to take a taste of seed.

I found a really good site where someone else raised a baby sparrow. Ordinarily you want to put it back in the nest unless it is too weak to compete with siblings for food. But this was not possible. Hand scent, apparently, with sparrows is not a deterrent for parents.

I am keeping him warm with a lamp, but have switched this morning with one of those "bean bag" microwaveable heating things you use for sore muscles. It is underneath some aquarium filter floss, and on top of that a napkin to line the cup shape I formed. I put another piece of floss over the top to keep heat in and its running about 82F in there. I tried to upload another pic, but blogger is not letting me, once again.

If someone reading the blog in southeast Michigan is home much of the day and would like to try raising this little guy, here is that site I found. She explains how she raised it to go wild in a very short time and how it returned each year to her house.

I won't pray that it survives, I'll pray that God's will is done for this wee little creature of the Lord. If he's still alive, he'll have to go to choir practice with me tonite so I can keep feeding him. He's actually a very fine soprano, having heard his little voice peep this morning. In the spirit of St. Francis, perhaps one of the fine priests there won't mind giving him a little blessing.

Posted by Diane Korzeniewski at 5:55 AM