St. Francis de Sales on the Sacrament of Penance 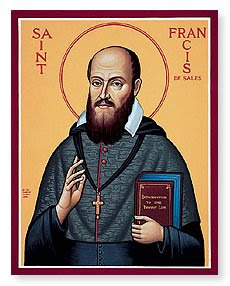 I began reading one small chapter daily some time ago. I knew when I ran across his chapter, "The Sacrament of Penance", I would have to do a post on it as it is such a neglected sacrament these days.

Please do read this and if you can't now, come back to it, bookmark it and read his words several times yearly. It is one of the best pieces of spiritual advice on how to make a good confession that I've run across. And, anyone who thinks confession is only for confessing grave sins is sadly mistaken. These days, it is sometimes the priest who discourages confessing of venial sins and imperfections. Lets pray that priests will get back to basics on this as it is so fundamental to the spiritual life.

Below this chapter on the Sacrament of Penance will also be some links, and more information. In my sidebar I have a couple of Salesian priests under my section for blogging priests, religious and deacons. Let's see what they have posted today, along with some others!

If you struggle with this form of English, bear with it as you will find it worthy of the struggle. If someone has the more current text, please feel free to link to it in my combox. I am taking this from the online CCEL 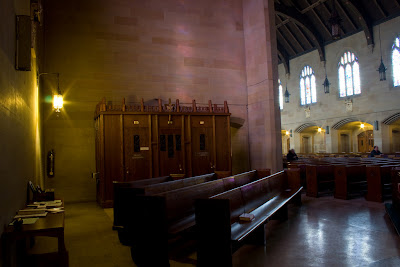 OUR Saviour has bequeathed the Sacrament of Penitence and Confession to His Church, [49] in order that therein we may be cleansed from all our sins, however and whenever we may have been soiled thereby. Therefore, my child, never allow your heart to abide heavy with sin, seeing that there is so sure and safe a remedy at hand. If the lioness has been in the neighbourhood of other beasts she hastens to wash away their scent, lest it should be displeasing to her lord; and so the soul which has ever so little consented to sin, ought to abhor itself and make haste to seek purification, out of respect to His Divine Gaze Who beholds it always. Why should we die a spiritual death when there is a sovereignremedy available? 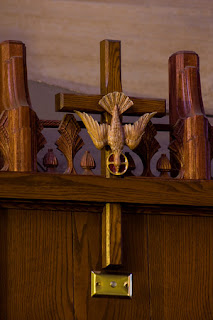 Make your confession humbly and devoutly every week, and always, if you can, before communicating, even although your conscience is not burdened with mortal sin; for in confession you do not only receive absolution for your venial sins, but you also receive great strength to help you in avoiding them henceforth, clearer light to discover your failings, and abundant grace to make up whatever loss you have incurred through those faults. You exercise the graces of humility, obedience, simplicity and love, and by this one act of confession you practise more virtue than in any other.

Be sure always to entertain a hearty sorrow for the sins you confess, however small they are; as also a stedfast resolution to correct them in future. Some people go on confessing venial sins out of mere habit, and conventionally, without making any effort to correct them, thereby losing a great deal of spiritual good. Supposing that you confess having said something untrue, although without evil consequences, or some careless words, or excessive amusement;--repent, and make a firm resolution of amendment: it is a mere abuse to confess any sin whatever, be it mortal or venial, without intending to put it altogether away, that being the express object of confession.

Beware of unmeaning self-accusations, made out of a mere routine, such as, "I have not loved God as much as I ought; I have not prayed with as much devotion as I ought; I have not loved my neighbour as I ought; I have not received the Sacraments with sufficient reverence;" and the like. Such things as these are altogether useless in setting the state of your conscience before your Confessor, inasmuch as all the Saints in Paradise and all men living would say the same. But examine closely what special reason you have for accusing yourself thus, and when you have discovered it, accuse yourself simply and plainly of your fault. For instance, when confessing that you have not loved your neighbour as you ought, it may be that what you mean is, that having seen some one in great want whom you could have succoured, you have failed to do so. Well then, accuse yourself of that special omission: say, "Having come across a person in need, I did not help him as I might have done," either through negligence, or hardness, or indifference, according as the case may be. So again, do not accuse yourself of not having prayed to God with sufficient devotion; but if you have given way to voluntary distractions, or if you have neglected the proper circumstances of devout prayer--whether place, time, or attitude--say so plainly, just as it is, and do not deal in generalities, which, so to say, blow neither hot nor cold.

Again, do not be satisfied with mentioning the bare fact of your venial sins, but accuse yourself of the motive cause which led to them. For instance, do not be content with saying that you told an untruth which injured no one; but say whether it was out of vanity, in order to win praise or avoid blame, out of heedlessness, or from obstinacy. If you have exceeded in society, say whether it was from the love of talking, or gambling for the sake of money, and so on. Say whether you continued long to commit the fault in question, as the importance of a fault depends greatly upon its continuance: e.g., there is a wide difference between a passing act of vanity which is over in a quarter of an hour, and one which fills the heart for one or more days. So you must mention the fact, the motive and the duration of your faults. It is true that we are not bound to be so precise in confessing venial sins, or even, technically speaking, to confess them at all; but all who aim at purifying their souls in order to attain a really devout life, will be careful to show all their spiritual maladies, however slight, to their spiritual physician, in order to be healed.

Do not spare yourself in telling whatever is necessary to explain the nature of your fault, as, for instance, the reason why you lost your temper, or why you encouraged another in wrong-doing. Thus, some one whom I dislike says a chance word in joke, I take it ill, and put myself in a passion. If one I like had said a stronger thing I should not have taken it amiss; so in confession, I ought to say that I lost my temper with a person, not because of the words spoken so much as because I disliked the speaker; and if in order to explain yourself clearly it is necessary to particularize the words, it is well to do so; because accusing one's self thus simply one discovers not merely one's actual sins, but one's bad habits, inclinations and ways, and the other roots of sin, by which means one's spiritual Father acquires a fuller knowledge of the heart he is dealing with, and knows better what remedies to apply. But you must always avoid exposing any one who has borne any part in your sin as far as possible. Keep watch over a variety of sins, which are apt to spring up and flourish, often insensibly, in the conscience, so that you may confess them and put them away; and with this view read Chapters VI., XXVII., XXVIII., XXIX., XXXV. and XXXVI. of Part III., and Chapter VII. of Part IV.,attentively. 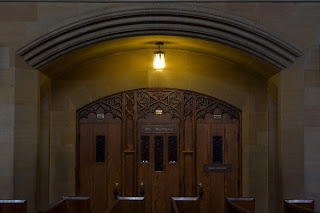 Do not lightly change your Confessor, but having chosen him, be regular in giving account of your conscience to him at the appointed seasons, telling him your faults simply and frankly, and from time to time--say every month or every two months, show him the general state of your inclinations, although there be nothing wrong in them; as, for instance, whether you are depressed and anxious, or cheerful, desirous of advancement, or money, and the like.


More on St. Francis De Sales, and on Confession

This may be updated with more links as they become available...

Words from Salesians on this saint:

Assumption Grotto is probably the confession capital of metro Detroit. The priests give of themselves generously. Regular confession is from 2:30 - 3:30 on Saturdays, and it is often little waiting at this time. That is because Grotto is a commuter parish and many parishioners take advantage of the Sunday confession times before the 9:30am and Noon Masses.

If you are in need of confession during the week, the priest who has the 7:00pm weeknight Mass will often hear confessions around 10-20 minutes prior to Mass. This too is usually low-volume with easy access. Just be in Church by 6:30 or so and watch for a priest to come. They come sometimes as late as 6:50, so just be there.

My advice is that if you have a long confession, or if it has been a while, or there is a complex issue, go on Saturdays when the priests have more time to give you. Sundays have long lines and the priests need to get through many people. The weeknight confession is also compressed for time. You can also call the rectory for an appointment any time.

And, priests at Grotto - that is the diocesan priests and the priests of the Order of Canons Regular of the Holy Cross who funtion there, always preach about the need to use confession frequently, even if only for venial sins and imperfections.