Splashdown in the Hudson.....it appears all got off safely! 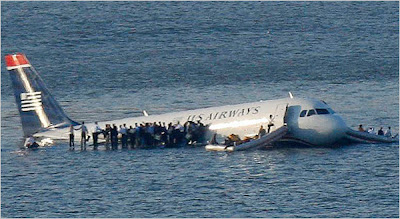 Photo Source: AP
This is unreal. Deo gratias that it appears everyone is ok...

It is thought [that is, speculation] that a flock of geese got in the way of the big bird above on take off and both engines were affected. Three minutes into the flight passengers were told to brace themselves for a hard landing.

Mayor Bloomberg says that it appears that all got off safely. Once she splashed down, the pilot and crew helped people to get of the plane and into position where boats could pick them up. The pilot then walked the aisle again after the jet was empty and believed everyone got off safely.

Thanks be to God. What an amazing gift that people were spared. Great job by the pilot and crew.
Te Deum Laudamus! Home