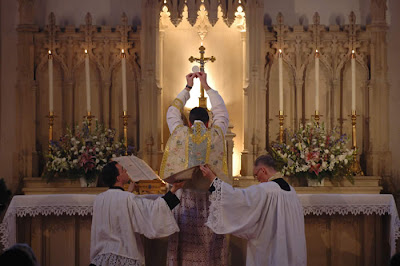 In a previous post, I had asked if anyone could affirm a claim made in blog comboxes about Bishop Vigneron having celebrated the usus antiquior. Thanks to a reader, I received a link to a page at the Institute of Christ the King with photos of one such Mass.

My google searches for proof kept turning up empty which I thought was unusual given the high publicity things get on the web.

These pictures were taken in 2005 on the occasion of Confirmation at a Traditional Latin Mass community, some two years before Summorum Pontificum.

Click here to view all of the pictures of Bp Vigneron celebrating this Mass and conferring the sacrament of Confirmation.

This is very heart-warming for parishes that celebrate Mass in the extraordinary form here in Detroit. It means an opportunity for a Pontifical High Mass for several parishes, and perhaps someday, at Blessed Sacrament Cathedral (which will be interesting given interior changes a few years ago). I fully expect to see the number of parishes offering the Traditional Latin Mass increase under this bishop. The interest is there, but I suspect the resources will be offered through the archdiocese, especially at Sacred Heart Major Seminary. I am most especially happy for seminarians who have an interest in the extraordinary form. 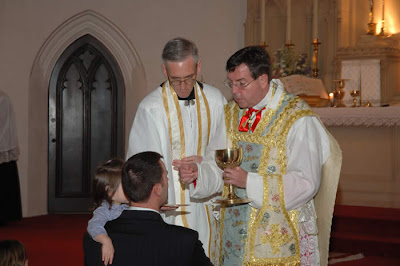 If there are records of other Masses, please email me or drop a link in the combox, anonymous or otherwise. If you know how, write in a pseudname rather than leave "anonymous".

UPDATE 1: I was just emailed this online PDF in which a Pontifical Mass in Oakland was celebrated by Bp Vigneron.