This story appeared in the Detroit News today, but I am giving you the version out of LifeSiteNews. Emphasis mine in bold, and comments in red brackets.

In an interview with The Detroit News, Vigneron addressed several current issues, such as Catholic higher education and the failing economy's impact on the Church's social ministries, but indicated that challenging the new US government's radical anti-life positions is of the highest priority. 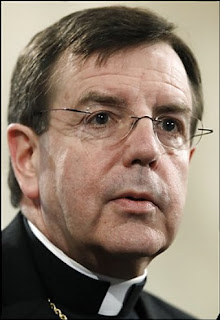 "I share the concern of all of the bishops of the United States that the administration has, at least prior to the election, given us indications that they are going to rescind some of the protections of the unborn," Vigneron said. "And I am very disappointed in that."

"We are going to have to represent our opposition as forcefully as we can and try to build coalitions to dissuade the administration from moving to that," said Vigneron, referring indirectly to President Obama's potential signing of the Freedom of Choice Act, which permits late and partial birth abortions and calls for domestic and international government funding of abortion, among other things.

The newly appointed archbishop was also asked to address the Church's position on refusing pro-abortion politicians Holy Communion. Canon 915 of the Catholic Church's Code of Canon Law states that those "who obstinately persist in manifest grave sin are not to be admitted to communion." [Thanks to Archbishop Raymond L. Burke, now the head of the Apostolic Signatura in the Vatican, there is discussion of this in ecclesiastical circles]

"I am not going to answer any hypothetical questions like that, especially from this distance," said Vigneron. "I simply want to affirm that part of being a Catholic is having a conviction that on these moral matters, the church speaks the mind of Christ [Rule #2 (Rule of Publicity) in Bp Vigneron's "10 rules". There can't be 10 versions of one truth] And I want to help Catholics, especially Catholics in responsible positions, to maintain the integrity of their professions." [this goes along with charity - you don't teach with the best one-line zinger or with a stick, but with love, always mindful of the dignity of others.]

Vigneron touched on this issue back in 2004, when in an article he stated, "Whenever a politician or political party promotes the acceptance and support of abortion or euthanasia, no matter how morally compelling their stands may seem on other issues, their stand on these crucial life issues must be judged as fundamentally flawed.” [Bingo! There are folks who feel that it is justifiable to dismiss the culture of life issues if they are focused on the poor. Or, they feel that by not having as many people in the world it minimizes poverty. The most pure approach is one that addresses both the life issues and the poverty. There are positive alternatives with financial and medical aid for poor mothers and many foster/adoptive parents waiting for a child to love, even a special needs child.]

Archbishop Vigneron concluded with a message of hope to Christians in the face of the severe moral and societal problems present today: "But I think that Christianity and the other faiths have some particular contributions to make, and one is to give people encouragement and to remind them that there is a tremendous reason for hope: God is with us, and he has seen us through tough times before."

The Archbishop is set to be formally installed in the Detroit Archdiocese on January 28.

I look for Abp Vigneron to be active in pro-life activities here in metro Detroit. Some have wondered aloud how he will deal with Gov. Jennifer Granholm. Keep in mind, that she is in the Lansing diocese and falls under Bishop Earl Boyea.

The bishops of the US are united when it comes to pro-abort Catholic politicians presenting themselves for Communion: They should not present themselves when they are knowingly in a such a deep conflict with the Church. However, where there are differences of opinion is on whether the pols should be denied Communion if they do present themselves. More bishops are getting familiar with that argument presented by Archbishop Raymond L. Burke on Canon 915 which I linked in the body of the article.

This is an area where I think that we can best help the bishops with our prayers. Regardless of where many faithful Catholics stand on denial of holy Communion, each bishop must act according to his own conscience. However, as a body of apostolic-successors, I believe they will continue to explore, discuss and understand the bigger picture and in context of Canon 915. The new Obama administration, with it's anti-life policies, carried on the backs of Catholic politicians, will certainly test our bishops.

If you want to do something to help them......go to adoration, or go to daily Mass when you can, and pray the Rosary for them.

Pray for our bishops!

Original article in Detroit News on January 22, 2009 (this may only be available online for a limited time):
Obama's abortion stance concerns new archbishop