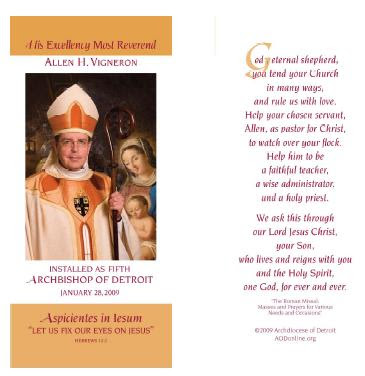 Above, the Prayer Card of Detroit's new Archbishop, Allen H. Vigneron, who will be installed today at 2:00. Tune in to EWTN, or watch it streaming live at the AOD website. The archbishop will be having many Masses of Thanksgiving throughout the metro area. You can see the parishes and Mass times here.

A native son of metro Detroit, it was said that Archbishop Vigneron missed this city. To ensure that he has not forgotten our winters while in sunny California, Michigan welcomed him back with a snowstorm. While it is worse in many areas south of metro Detroit we are estimated to get a mere 2-6 inches, with most getting just a 2-3 inch dusting. This is very modest by our standards, but nonetheless, a reminder that we aren't called the mitten state by our shape alone!

I took a vacation day today and will be at Blessed Sacrament Cathedral for the Installation Mass. I hope to have a few pics to share with you, but I won't make any guarantees.

The other day I shared with you the reflections Bishop Vigneron had on St. Thérèse of Lisieux. He took the helm in Oakland on her feast day, October 1, 2003. Vigneron actually made reference to this saint in several of his writings that I have found online.

This having been said, I have little doubt that he will always remember that he was installed as Archbishop of Detroit on the feast day of St. Thomas Aquinas.

I am going to leave you with the 2nd reading in the Office of Readings in the Liturgy of the Hours today. It is from a conference by St. Thomas Aquinas (Collatio 6 super Credo in Deum)

"Why did the Son of God have to suffer for us? There was a great need, and it can be considered in a twofold way: in the first place, as a remedy for sin, and secondly, as an example of how to act.

"It is a remedy, for, in the face of all the evils which we incur on account of our sins, we have found relief through the passion of Christ.

"Yet, it is no less an example, for the passion of Christ completely suffices to fashion our lives.

"Whoever wishes to live perfectly should do nothing but disdain what Christ disdained on the cross and desire what he desired, for the cross exemplifies every virtue.

"If you seek the example of love: Greater love than this no man has, than to lay down his life for his friends. Such a man was Christ on the cross. And if he gave his life for us, then it should not be difficult to bear whatever hardships arise for his sake.

"If you seek patience, you will find no better example than the cross. Great patience occurs in two ways: either when one patiently suffers much, or when one suffers things which one is able to avoid and yet does not avoid. Christ endured much on the cross, and did so patiently, because when he suffered he did not threaten; he was led like a sheep to the slaughter and he did not open his mouth. Therefore Christ’s patience on the cross was great.

"In patience let us run for the prize set before us, looking upon Jesus, the author and perfecter of our faith who, for the joy set before him, bore his cross and despised the shame.

"If you seek an example of humility, look upon the crucified one, for God wished to be judged by Pontius Pilate and to die.

"If you seek an example of despising earthly things, follow him who is the King of kings and the Lord of lords, in whom are hidden all the treasures of wisdom and knowledge. Upon the cross he was stripped, mocked, spat upon, struck, crowned with thorns, and given only vinegar and gall to drink.

"Do not be attached, therefore, to clothing and riches, because they divided my garments among themselves. Nor to honours, for he experienced harsh words and scourgings. Nor to greatness of rank, for weaving a crown of thorns they placed it on my head. Nor to anything delightful, for in my thirst they gave me vinegar to drink."