Bishop Allen Vigneron's "10 Rules for handling disagreement like a christian" 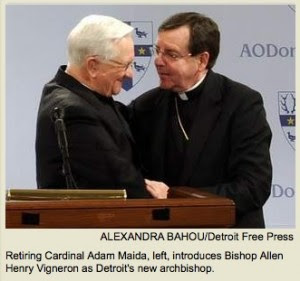 Note: post has been edited to isolate the "10 Rules". Follow the link in the paragraph below for the first half which was edited into it's own post.

The first thing I want to share in this post series on Archbishop-elect Allen Vigneron is this gem. It was written in September of 2005 by Bishop Vigneron while in Oakland. These are wise words so bookmark the page and keep coming back to it, especially when you feel frustrated in dealing with someone.

I plan to come back to these rules when looking at the written and spoken words of the bishop because I have already seen some good examples of it in action.

I want this to set the tone for forthcoming posts.

You can learn alot about someone by their writings. This says quite a bit.

When I began my term as the rector of the major seminary in Detroit a little over 10 years ago, one of the problems I had to help my students deal with was the often-sharp differences of opinion that we find within the Church.

The seminarians looked to me as the pastor of that community to help them navigate through the contentious expression of differing viewpoints. To fulfill my responsibilities as the father of that seminary family I composed what I called “Ten Rules for Handling Disagreement Like a Christian.”

Whether or not the clash of opinions within the Catholic community in the U.S. has grown stronger or weakened over the last decade I couldn’t say; however, I do know that with some frequency we still find ourselves at odds over what we think and where we want to head.

With that in mind, I thought that I, now serving as pastor of the family of the Oakland Diocese, could profitably share these “Ten Rules” with all of you. So, here they are, along with my own brief commentary on each.

1. The Rule of Charity: “Charity is primary.”

This has to be the place to start whenever we disagree with one another: with love. St. Paul said: “If I speak in the tongues of men and of angels, but have not love, I am a noisy gong or a clanging cymbal” (1 Cor. 13:1). No matter how wise my insights or astute my plans, they count for nothing if I do not offer them with love.

Now, that charity is the first and fundamental requirement for all authentic Christian speech does not mean that such speaking can only be weak, but it does mean that whatever is said ought always to be offered respectfully and for the genuine service of others, especially my hearers. In fact, all of St. Paul’s sage advice in the “Hymn to Charity” in 1 Cor. 13 spells out eloquently this “Rule.”

2. The Rule of Publicity: “Think with the mind of the Church.”

This is the reason I call this the “The Rule of Publicity.” The criterion for our deciding our disagreements is not one’s own private opinions, but the mind of the People of God, what the Church thinks.

In order to apply this rule effectively, we need to use a corollary: “Measure everything against the authoritative documents of the Magisterium.”

The logical question to follow any call for us to “think with the mind of the Church” is: How do I know what that is?

The answer is: “Look in the places where the Church has expressed her mind with authority.” Look in the writings of the Councils and the popes, in the Church’s laws, and in the teachings of her Fathers and Doctors. Any survey or poll, no matter how extensive or accurate, if it contradicts the Magisterium, is not the Church’s mind.

3. The Rule of Legitimate Freedom: “What the Church allows is not to be disallowed.”

This rule means that in situations where the Church says that a variety of views or opinions is legitimate, I should not impose my option as a mandate on others. For example: we can receive Holy Communion in the hand or on the tongue. Either one is acceptable.

This fourth rule is an extension of the one above. It applies the same sort of respect for diversity to the wider spheres of our common life. This rule is based on the recognition that “It’s a big Church.” God has given gifts of grace in an almost dizzying variety. Some folks are attracted to the Carmelite Third Order, others gather for charismatic prayer. Nobody has to live the Christian life exactly the way I do.

5. The Rule of Modesty: “Not all of my causes are God’s causes.”

Yes, it’s true that in many cases we invest our heart’s devotion because that’s what God commands for all his people. But that’s not necessarily so in every instance. Some of my agendas are mine. It’s right to embark on projects with a zealous desire to give God glory, but I have to remember that while it may be his will for me to take this on, there are cases when it’s not his will for everyone else to join me.

6. The Rule of Integrity: “To do evil in order to accomplish good is really to do evil.”

Breaking one of God’s commandments is not the way to advance his Kingdom, ever. If, in the service of Christ, I act in an un-Christian way, I become a highly effective ally of the very forces I set out to combat. (Among those who are big “Star War” fans, this rule is sometimes referred to as the “Darth Vader Axiom.”)

7. The Rule of Realism: “Remember that Satan is eager to corrupt my efforts to build up the Kingdom, and he’s smart enough to figure out a way to do it.

This rule is strong statement about the need for each of us in our disagreements to practice that form of realism, for which the more common name is “humility.” My cause may be right or my view may be true, but I have to watch that their goodness is not corrupted by my infidelity.

8. The Rule of Mystery: “Not all the habits and attitudes which belong to a society governed by a representative democracy are appropriate in the Church.”

In every age there is a tendency – often unconscious – to shape the life of the Church after the pattern of the secular order of the day. In the Middle Ages, the governance of the Church was often configured to the feudal system of the times, sometimes with very harmful consequences. For example, bishops and abbots were identified with the barons of the nobility.

In our own day, we could make a similar sort of mistake: thinking that the responsibility and authority of the Church’s pastors are of the same sort as that of our elected officials. In such mistaken identifications, what is at work is a forgetting that while the Church is, yes, a human reality, she is also a divine reality, a mystery, unlike any other community every known in the history of the world.

The Church is neither a democracy nor a monarchy. She is the Church, the Lord’s own creation, constituted according to his will and plan.

9. The Petrine Rule: “Nobody ever built up the Church by tearing down the pope.”

This rule follows quite logically from the one immediately above. The Holy Father’s leadership is part of the Church’s constitution from Christ. Because the pope is not the sort of democratic leader we are accustomed to in civil society, there is a tendency by some observers to characterize his office as a “throwback” to times that we have surpassed, a “burden” for the Catholic people that we would well be freed from. Not so.

The pastoral care we receive from the Holy Father is a great grace, St. Peter’s own service of his fellow disciples continuing to this very day. A great pope makes us a better Church.

10. The Eschatological Rule: “The victory is assured; my job is to run out the clock with style.”

Christ is risen – truly, body and soul risen and in glory at the Father’s right. He has conquered sin and death and all the forces that threaten us. Whatever is at stake in our trials or conflicts, the certainty of Christ’s victory is not in doubt.

And he promised he would be with us always, until the end of time (cf. Mat. 28:20). He will never leave his Church, and his victory will be ours as long as we abide with him in his Mystical Body.

This rule, of course, is not an excuse for giving less than our full effort to spread the Kingdom; that would be a kind of presumption. However, this rule is a call to remember that there is one Savior, and it’s not you or me. Our mission is to serve the Lord in fidelity and hope, and be ready for him to act, for he surely will.