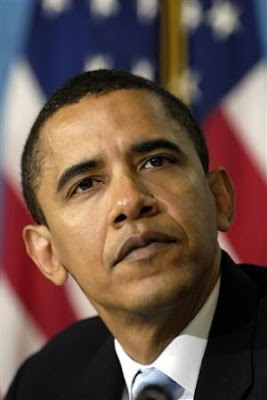 I didn't vote for Barack Obama, but unlike disgruntled Democrats and others who rejected George W. Bush, proclaiming, "he's not my president", I won't stoop to that level.

Hence, Barack Hussein Obama is my president and as such, will receive my deepest prayers for his success on economic, world and domestic issues, and his conversion on culture of death issues. Jesus commanded us to love and it is with Christian love that conversions happen.

I truly wish I could have rejoiced fully today. On the one hand, I was very glad to see that America has proven it is not too bigoted to elect a black man for president. On the other hand, my heart is heavy for the increase in the number of deaths to the most innocent of innocents, the unborn - we will see in this administration. The damage done in these next four or eight years, could last for decades. I hope all Catholics who dismissed the culture of life concerns are paying close attention to all that is going to rapidly take place.

As we celebrated Martin Luther King day yesterday and heard those famous words about judging a man not by the color of his skin, but by the content of his character, I wondered how Dr. King would have felt about the greatly persecuted class of people we call the unborn or pre-born.

Dr. Alveda King, the niece of Martin Luther King, is very active in the pro-life movement. She is not Catholic, but works with Fr. Frank Pavone and Priests for Life. This past summer, Dr. King wrote:

"While African Americans comprise only 4.5 percent of Minnesota's population, black received almost 25 percent of the abortions performed on Minnesotans," stated Dr. King. "Nationally, black women are 4.8 times more likely to have an abortion than white women. It's hard to believe, as the abortion lobby would have you believe, that this discrepancy is caused strictly by economics."

"Abortion has been a scourge on all Americans, but particularly African Americans," added Dr. King. "The numbers speak for themselves. The abortion industry has targeted minority neighborhoods for years. It's not only time that our leaders investigated why this is happening, it's time they stopped indirectly subsidizing these killings by giving our money to businesses that do abortions."

Today, as President Obama was sworn in, the White House webpage was changed over. Buried under "Agenda" and "Women", was this:

*Supports a Woman's Right to Choose: President Obama understands that abortion is a divisive issue, and respects those who disagree with him. However, he has been a consistent champion of reproductive choice and will make preserving women's rights under Roe v. Wade a priority in his Adminstration. He opposes any constitutional amendment to overturn the Supreme Court's decision in that case.

Lifesite News has a piece on this, as well.

*Supporting Stem Cell Research: President Obama and Vice President Biden believe that we owe it to the American public to explore the potential of stem cells to treat the millions of people suffering from debilitating and life-threatening diseases. Obama is a co-sponsor of the Stem Cell Research Enhancement Act of 2007, which will allow research of human embryonic stem cells derived from embryos donated (with consent) from in vitro fertilization clinics. These embryos must be deemed in excess and created based solely for the purpose of fertility treatment.

Imagine where we would be, had Barack Hussein Obama been aborted by his mother because his father didn't take responsibility, or because she would have to struggle. Hence, the point of this commercial, which I'm sharing again, aired in select segments of the US today on Black Entertainment Television (compliments of CatholicVote.com)


I believe we are going to see actions and words out of many bishops, the likes of which we have never seen, during this administration. Let's pray that God gives them the courage they need, as well as the prudence. Charity for confused Catholic politicians and others isn't manifested in silence. Concern for self-esteem should never trump concern for the souls of our brothers and sisters "carried away by all kinds of strange teachings".