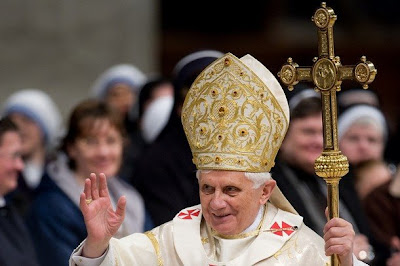 EDIT: This post may be updated as I get emails which more clearly translate this. Some clarifications have already been added thanks to a reader who provided them.

The Italian journal Petrus has an exclusive article about a handbook to be made public and distributed to all bishops by Pope Benedict XVI for dealing with claims of apparitions (and I'm sure private revelations in general). The headline provided by google translator gives us "crackdown" where I'm told that in Italian, "giro di vite" translates into "turn of the screw". Crackdown, clampdown, screw-tightenting - you get the idea.

After spending so much time getting some points into English, this is absolutely brilliant on the part of Pope Benedict XVI, and so......Pope Benedict-like.

This is HUGE! Pardon any typos or babble - it's been a long night.

It is the answer to many prayers for an end to the divisive chaos in the Church brought on by voluminous apparition claims in recent years, some of which have been ongoing for decades.

Such things also lead people away from authentic apparitions and into a risky attachment to something that may never see approval.

I do not speak Italian, but used the google translate tool to get a rough view of it (hence, the long night). If anyone comes across a translation offered by a competent resource, or news article about it, please email me at TeDeumBlog@gmail.com.
Using Google to give me a rough translation, I can break it down as follows below My comments will be in brackets and in red text when provided within the bullet points.

If someone feels anything I have listed in a bulleted point is mistaken, please email me at TeDeumBlog@gmail.com.

The comment box will be closed on this due to past experience with this topic in which people used it as an opportunity to promote apparitions not approved. If someone comes across a good translation by a reputable source, please email me, as well.
Medjugorje is discussed in rather candid detail in a few places towards the end which I did not isolate here, so you will need to go to the actual article (I have links with original Italian and in "Google English" at the bottm of this post if you prefer to skip my bullet points, but you need to read it over and again to get certain things).

Major points from the Petrus article, as best as I could get...


The Holy Father is issuing a handbook developed with the help of a pool of theologians, psychiatrists and exorcists to help with the matter of apparitions. It will be made public and will be sent to all bishops. Summing up the first part of the article...

The Church is concerned with several things:

This handbook will compliment the 1978 Criteria for Discernment of Apparitions from the CDF, [originally given to bishops and never intended to be made public]. Hence, it does not replace it.

The second part of the article deals with some things the Church wants done:

The article then expresses the obvious: This will ultimately lead to a crackdown ["giro di vite" - I'm told this expression literally means, "turn of the screw"] on these kinds of phenomena that are not authentic. I could not fully decipher parts of this even with Google translator, but you get the gist of what is about to come bearing down on the Church. I give it to you here and am putting in bold some key things:

Under the new instructions ready to be issued by the Holy See on behalf of Benedict XVI, that the phenomenon of Marian apparitions has already had to do during its mandate of high technology as Prefect of the Congregation for the Doctrine of the Faith, c 'is therefore expected a real crackdown, with' process' long, meticulous and hard by the diocese, including the proper information to be provided to the faithful, so that there will be no events similar to those of Civitavecchia and Medjugorje, where thousands of people continue to come even though the Vatican has never recognized as true supernatural phenomena reported there.

The article quotes then Cardinal Ratzinger: To know the mind of Benedict XVI on the subject, just remember what he said (journalist and writer Vittorio Messori points out): "In this field, more than ever before, patience is a key element. No apparition is indispensable to faith, revelation ended with Jesus Christ. "

There is more to the article which now goes into more discussion about Medjugorje and the other place mentioned. I will provide this google translator quote which is quite telling....

".....the Vatican has asked pilgrims at the Roman (one of the most important agencies of religious tourism in the subordination of the Vicariate of Rome) to withdraw from the catalog visits to the most famous places in Bosnia-Herzegovina, where, however, go over two million faithful of the year. Where is the problem? They have created two factions: one in favor of the apparitions, and then the side of the visionaries and the other openly sided with the diocesan bishop, Bishop Ratko Peric, who like his late predecessor, does not believe the veracity of these phenomena, and not coming ever heard, called from time to alleged visionaries living in the hidden and not disclose any message attributed to Madonna. Enough already no obedience to the bishop, according to the Road Map [handbook] devised by Benedict XVI to declare false the apparitions of Medjugorje. [yeah - the grace is not there when there is such disobedience, and the "seers" had an opportunity to obey him when he said at a publized 2006 Confirmation homily...

Therefore I responsibly call upon those who claim themselves to be “seers”, as well as those persons behind the “messages”, to demonstrate ecclesiastical obedience and to cease with these public manifestations and messages in this parish. In this fashion they shall show their necessary adherence to the Church, by neither placing private “apparitions” nor private sayings before the official position of the Church. Our faith is a serious and responsible matter. The Church is also a serious and responsible institution!]

How did the Medjugorje "seers" respond? With disobedience to the bishop (Check mate!)]

If I understand that last part, the disobedience alone is enough to disqualify Medjugorje.

It was just over two years ago that I predicted......the Holy See would hand down a completely negative judgment on Medjugorje. That has not happened yet, but I believe more than ever, we will see some statement after the handbook is out there, to this effect, based on the new "Road Map"

I want to break here because it is late, but not before a brief commentary. I will provide links at the very bottom for you to peruse them in full for other details.

This whole idea of a comprehensive handbook, available to anyone and everyone, is simply brilliant. I say this for several reasons:


Perhaps with the release of this handbook we will see closure in some ongoing apparitions dealt with rather than held in an ambiguous state or limbo. While good things have happened in Medjugorje, it has also served to divide the Church, sadly. I believe that there are plenty of documented examples of where Medjugorje proves to be problematic based on what is noted from this handbook (seers making a living off of their status through pilgrimages, tours, etc.; disobedience to the local bishop, etc.).

These apparition and private revelation claims are not light matters. If people are engaging in something of a false nature, even if they have good intentions, their souls are in danger of being lost. The most charitable thing for such "visionaries" is to call them out on it so that they can examine their conscience and convert before significant damage is done.

I believe history will also show that even in false apparition claims, God and his Mother, have used them to their advantage. At places like Bayside, condemned long ago, there were conversions, confession and vocations. Magdalen of the Cross duped many for years - including bishops and priests, before finally confessing that she made a deal with the devil. There again, God used it to His advantage, bringing about conversion, confessions, and vocations.

No matter how many good things come out of any apparition site or private revelation, if it yields signs that go against authenticity, then we must remember one thing: The end does not justify the means (Veritatis Splendor). Truth trumps all.

I will probably have more to say on this later, especially if we can get a good translation of this article, and when the actual handbook is released.

Note if Google Translator version I provide above does not work, Google the headline paragraph in the Italian version (the whole thing) and then hit the "translate this" instead of the original link, if your browser has that option.

EDIT January 10, 2009: An article has broken on this in Spain for those fluent enough in Spanish to read it. Google translator really did a wierd job on translating the page, but I got enough to see that it is news based on this matter.