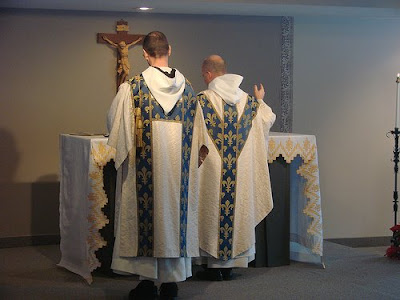 I have featured several stories of parishes turning liturgically east - ad orientem during their ordinary form Masses (novus ordo), but this is the first religious order I have been able to share. If someone knows of others, please drop links into the combox and I'll follow up on them, or email me at TeDeumBlog@gmail.com.

It is very heart-warming to see some of our monastics - specifically Cistercians doing this.

Some Grotto-goers may recall a monk who comes to Grotto a few times yearly to stay with a parishioner.

Fr. Logan, also a military chaplain, is seen hooded in these Memorial Day pictures (with one pic to the right) ahead of the 9:00am, Mass. When Father is with us he enjoys celebrating ad orientem, as well (I am not sure if he has celebrated the TLM at Grotto yet or not. Grotto Masses are in both ordinary and extraordinary forms and even the ordinary form has been celebrated ad orientem for many years now in both English and Latin. The vernacular Mass features much Latin, as well (the ordinaries and the Eucharistic Prayer).

Here is more from Brother Stephen's blog - Sub Tuum - which has been added to my sidebar under the blogging priests, religious and deacon's section.

In my last entry, I said that there might be liturgical developments on the very near horizon and so it has come to pass. This morning the Conventual Mass for the Solemnity of Mary the Mother of God was celebrated ad orientem, which will now be the normative position for saying Mass at Our Lady of Spring Bank. (The Mass was solemn Latin in the ordinary form using the Cistercian Graduale.)

There are still many kinks and questions to address pertaining to the rank of feasts, the customs of the ordinary form v. Cistercian usage, the size of our community, and the layout of our oratory. The draft customary will certainly see much fleshing-out and many amendments over the coming months, but Fr. Prior thought that today was the appropriate day to begin to face God together, it being the first of the year and a solemnity of Mary.

I'm sure to have more to say later on this topic as we begin to sand off the rough edges, but I wanted to get the news up since I knew it would be of particular interest to some of you and, perhaps, to a somewhat broader audience, since I believe that this makes us the first house in our order to return to ad orientem celebration. (There are a few more photos here.)

See more photos in the original blogpost of Br. Stephen

I go back to something that bears repeating....

Seek not the face of the priest in the Mass,
but the Face of Almighty God!
For those men interested in a more traditional, monastic life - not necessarily "tridentine", you might want to consider the Spring Bank Abbey in Wisconsin, in your discernment.

I might point out, as well, that we should support these religious orders with purchases when we can. Go visit these Cistercians at Laser Monks, as well.