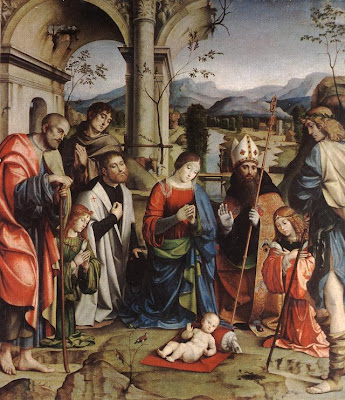 I may have to make corrections to what is below as I typed it in a hurry this morning from the Breviary. I don't typically like not capitalizing certain words and names that refer to the Divine, but for now must leave it as it appears in the Office. Part of restoring a sense of the sacred would be a return to showing respect in written words.

From today's Office of Readings, a thought provoking sermon from the great Doctor of the Church...

Beloved, our Lord Jesus Christ, the eternal creator of all things, today became our Savior by being born of a mother. Of his own will he was born for us today, in time, so that he could lead us to his Father's eternity. God became man so that man might become God. The Lord of angels became man today so that man could eat the bread of angels.

Today, the prophecy is fulfilled that said: Pour down, heavens, from above, and let the clouds rain the just one: let the earth be opened and bring forth a savior. The Lord who had created all things is himself now created, so that he who was lost would be found. Thus, man, in the words of the psalmist, confesses: Before I was humbled, I sinned. Man sinned and became guilty; God is born a man to free man from his guilt. Man fell, but God descended, man fell miserably, but God descended mercifully; man left through pride, God descended with his grace.

My brethren, what miracles! What prodigies! The laws of nature are changed in the case of man. God is born. A virgin becomes pregnant with man. The Word of God marries the woman who knows no man. She is now at the same time both mother and virgin. She becomes a mother, yet she remains a virgin. The virgin bears a son, yet she is not barren. He alone was born without sin, for she bore him without the embrace of a man, not by the concupiscence of the flesh but by the obedience of the mind.