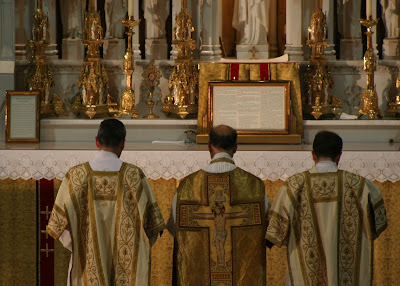 A scene from the September 14, 2007 celebration of the extraordinary form of the Roman rite. It was the first day that the Holy Father permitted pastors everywhere to celebrate the ancient liturgy without permission from the local bishop. It had not been celebrated at Assumption Grotto in over 40 years before the Feast of the Holy Cross. See photo story here

I just read an outstanding article by a young father (as in dad) who speaks about his and his wife's transition into the extraordinary form of the Roman rite. Read this article by journalist and blogger, Steve Skojec, to the end. It is beautifully written and discusses the challenges a young family with children can have at Mass, dabling with whether it would just be easier to head back to the Novus Ordo. You'll have to read the whole thing to learn what they did. It also highlights how and why young people are attracted to the Traditional Latin Mass (TLM).

My discovery of the Traditional Latin Mass, now known in the wake of Summorum Pontificum as the "extraordinary rite," was a slow but logical process rooted in a lifelong desire for a liturgy that was sensible, sacramental, and enhanced by the trappings of orthodoxy.

The journey began in a small, rural parish in Pennsylvania attended largely by converts and accompanied by folk music. It deepened through my involvement with a religious congregation that augmented their spiritual life with Gregorian chant, adoration of the Blessed Sacrament, and an approach to contemporary liturgy that was somber and reverent. In college, I flirted with the Byzantine rite, finding the ad orientem posture of the priest refreshing, the incense welcome, the deeply scriptural sense of ritual satisfying.

During our engagement and the early years of marriage, my wife and I were drawn to a parish that celebrated the novus ordo in a more traditional way, employing the use of Latin, incense, ad orientem, polyphony, and chant. Our wedding Mass was celebrated in this manner as well. But it wasn't until we moved to Arizona in 2004 that we finally made the commitment to the classical rite, with an indult granted to St. Thomas Apostle parish in Phoenix by Bishop Thomas Olmsted.

My first exposures left me feeling disinterested and confused. Raised completely within the novus ordo, I found the older form inaccessible and foreign. But after I grew in my understanding of liturgy, what was once impenetrable became desirable, appealing, and remarkably comfortable. My wife -- who had never professed a specific religious faith prior to her conversion to Catholicism -- was even more drawn to it than I was.

The first two years we spent with the ancient and venerable liturgy were like a honeymoon. Babies were born and baptized according to the older form. We dove into our missals and learned to appreciate and understand the beauty of the Mass that was familiar to so many of the Church's beloved saints. I undertook a spirited defense of my newfound love for traditional liturgy both online and in gatherings of family and friends.

We eventually moved back to Northern Virginia in 2006 and began attending Mass at St. Mary, Mother of God, in downtown Washington, D.C. As our adorable infants grew older and louder, however, I spent less and less time with my missal in prayer and more time in the narthex of the Church in some sort of parent-child version of a cage match.

Readers may also be interested in a post I made, entitled: "Shhh....the secret to quiet and still children during Mass". But, please follow the link to the original article and read it to the end. Trust me, you'll love the ending which I didn't want to spoil here!

***Support the Dominus Est*** Project
Posted by Diane Korzeniewski at 6:54 AM