The Saints of Pope Benedict: St. Simon of Lipnica 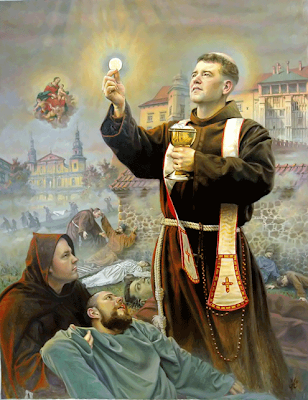 In his three year pontificate, Pope Benedict XVI has canonized 14 saints, including St. Simon of Lipnica pictured above as he ministered to those dying during a plague.

I found this to be one of the most impressive paintings. I mean, click on it to enlarge it slightly and just stare into it for a while. You could meditate on the many things seen in that painting. I woud love to know more about it, who painted it, and when, but I can't read Polish (even though I am of Polish heritage). If anyone stumbling on this post can give me that info from the website or elsewhere, please drop it into the comment box for all interested. I know I have readers from Poland - at least, my stat counter shows I do.

Catholic World Report - a magazine published monthly by Ignatius Press, featured the same picture in their story: Pope Benedict's Saints. Here is an excerpt from the Vatican webpage dedicated to him:

The love of Simon for his brothers and sisters was manifested in an extraordinary way during the last year of his life, when an epidemic of plague broke out in Krakow. The city was under the scourge of the disease from July 1482 to the 6th January 1483. The Franciscans of the convent of St. Bernardine tirelessly did all they could to care for the sick as true consoling angels.

Br. Simone, held it to be a “propitious time” to exercise charity and to fulfil the offering of his own life. He went everywhere comforting, giving succour, administering the sacraments and announcing the consoling Word of God to the dying. He was soon infected. He suffered the pain of the disease with extraordinary patience and, near the end, expressed his desire to be buried under the threshold of the church so that all could trample on him. On the sixth day of the disease, the 18th July 1482, without fear of death and with his eyes fixed on the Crucifix, he gave his soul back to God.

The magazine article, and the Vatican website talks about his sermons. I would sure love to see some of those. I wonder if any were preserved and if they are available in English.