9 Days with St. Dominic Savio: The saint meets a saint 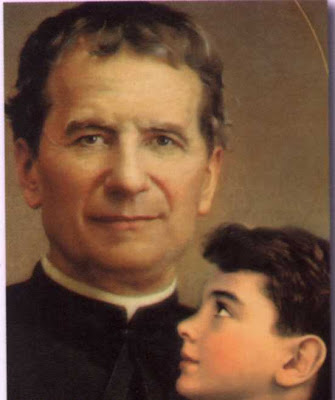 As we continue to look more closely at the life of St. Dominic Savio, we need to look at how the young boy ended up at Don Bosco's oratory. Father Cugliero discovered that Don Bosco would be visiting his native town of Becchi which was only a half-an-hour from Moriondo by foot. Don Bosco's successes had spread all over and Father Cugliero made a brief trip to Turin to speak to him about the young Savio.

We now pick up the story in the book when St. John Bosco and St. Dominic Savio meet for the first time. From the 1954 book, Dominic Savio - Teenage Saint by Fr. Peter Lappin:

"Moriondo, Father. Father Cugliero said he spoke to you about me."

"Yes, he did indeed. How are your studies?"

Dominic told him. What he said was borne out of his father, who added proudly that his son knew the Catechism by heart.

As was his constant habit, Don Bosco gradually brought the conversation around to the state of the other's soul. Their talk took on an air of cordial intimacy.

"We were soon in each other's confidence, " wrote Don Bosco. "He in mind, and I in his."

Toward the end of the interview, Dominic wanted to settle things definitely.

"Do you mean to let me come to the Oratory?" he asked the priest.

"Yes," Don Bosco smiled. "You see I think I see in you a lot of good material."

"What do you think it's good for, Father?"

"To make a beautiful garment for our Lord."

"Well, to tell the truth, Dominic, you don't seem to be any too strong."

"Oh, don't mind that, Don Bosco! God will give me enough for the future."

"And when you finish your studies, what would you like to be?"

"A priest. If God gives me strength enough, Father, I should like to be a priest."

"Fine. Fine!" exclaimed Don Bosco. "Now, Dominic, I want to see how much that head of yours will hold."

He picked up a little volume of his own Catholic Readings.

"Take this book and learn this page by heart. Tomorrow when you have it down pat, come and see me again. Meanwhile, you can take some fresh air and let your father and myself discuss the ways and means of sending you to the Oratory."

Details concerning Dominic's departure were discussed and about eight minutes later they were finished. Dominic reappeared in the doorway.

"Mind you, Dominic," warned Don Bosco, "I meant you to learn it by heart!"

Dominic sailed through the lesson with one or two stops for breath. He followed up a brilliant performance with explanations of what he had memorized.

Don Bosco looked at Dominic for a moment. His piercing blue eyes searched the boy's face.

"Dominic," he said at last, "since you anticipated the lesson, I'll anticipate my answer. From this very moment, I count you as one of Don Bosco's boys. You must start praying from now on tht you and I may do God's holy will in your regard."

Dominic took the priest's large leathery hand in his own small white ones and kissed it warmly. Don Bosco blessed both him and his father and the two set out again along the road to Moriondo.

This meeting, incidentally, took place at the humble Bosco home in Becchi. Afterward, Don Bosco used to point out to his friends exactly where he and Dominic stood while they had talked together. After that first meeting he wrote his impression of the boy: "A cheerful youngster with a smiling face . . . I recognized in him a soul made wholly according to the spirit of God, and I was not a little astonished to see the marvels that grace had already wrought in one so young."

If you are doing the Novena to St. Dominic Savio for March 9th, go back to Post (day) 1 and scroll to the bottom. More storiest

Day 1: The pint-sized boy and the Missal
Day 2: "Death before Sin!"
Day 3: Patron Saint of the Falsely Accused