9 Days with St. Dominic Savio: Founder of the Society of Mary Immaculate 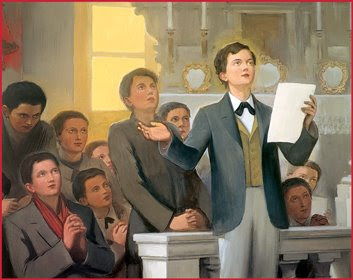 In the year 1854, Dominic made a novena to the Immaculate Conception with
special fervor. Each day of the novena his love fo the Mother of God increased until finally he could no longer hold himself in. He felt he had to speak to somebody about what was on his mind, and with Dominic that somebody always meant Don Bosco. In the evening, Don Bosco accustomed to receive his boys, he knocked at the saint's door.

"Father," he said, "I should like to do something very special for our Lady during this Novena."

"Yes," replied Dominic. "But what do you think I ought to do?"

"Nothing but your duty," said Don Bosco. "Although you might pay particular attention to your prayers."

"Then go often to Holy Communion."

"I'm doing that already, Don Bosco," said Dominic. "Soon I hope to be able to go every day. But I'd still like to do something more."

"I'd first like to make a general confession, then offer myself completely to our Lady and ask her to keep me from sin. You see, I want the grace to be allowed to die before I ever commit a mortal sin."

December 8, 1854, was a day of great public rejoicing for Catholics around the world, for the Holy Father, Pope Pius IX, proclaimed the dogma of Immaculate Conception.

That evening, in a quiet corner of the Oratory church, Dominic knelt at the altar of the Mother of God and consecrated himself completely to her service for the rest of his life. He repeated to her his heroic motto: Death before sin!

"From this moment," wrote Don Bosco, began that exemplary kind of life, that exactness in the performance of his duty, beyond which it is difficult to go."

He was only twelve and a half years old, and this was his second important step along the road to sanctity.

With that, we jump to a website that jumps forward a couple years. Dominic did more for our Lady than he realized he would do. From the site of the Motherhouse of the Salesians of St. Don Bosco (SDB) in Turin, first repeating what is above (emphases mine):

8th December, 1854, Dominic Savio entered this church, knelt in front of the altar of the Immaculate and consacreted himself to the Virgin Mary with this short prayer (that for a long time, the Salesian boys learnt by memory and made their own):

"Mary, I give you my heart, make it always yours. Jesus and Mary, You are always my friends, but for pity's sake, make me die rather than let me suffer the disgrace of committing a single sin".

The altar of Our Lady where Dominic Savio consacreted himself to her is the work that recalls the foundation of the Society of the Immaculate, the 8th December, 1854. Two years later, Dominic Savio returned to kneel before this altar, no longer alone, but accompanied by the best boys from the oratory. He had founded the "Society of the Immaculate". He had asked himself:

"Why must we try to do good to others alone? Why don't we - all the most kind-hearted young people - unite and become a "secret society" of little apostles among the others?". Don Bosco approved of his proposal.

Dominic did not know that he had only 9 more months to live but he created a masterpiece.

Those "first founders" would become Salesians, except for Dominic who would go to heaven.

The Society would be transferred to every Salesian house for more than 100 years, becoming, everywhere, a group of committed young people certain of their vocation.

Day 1: The pint-sized boy and the Missal
Day 2: "Death before Sin!"
Day 3: Patron Saint of the Falsely Accused
Day 4: The Saint Meets a Saint
Day 5: The Stone Duel