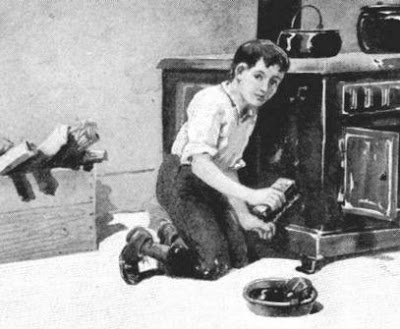 As we work our way toward's the March 9th feast day of St. Dominic Savio, we look now at one of the stories that likely led to his being named a patron saint of the falsely accused, among other titles.

It was the new boys who got to "fix the stove". That is, it was Dominic's duty to clean out the stove early in the morning and reset it so that when the teacher, Father Cugliero came in from the cold, he could put a match to it. Dominic was diligent. After it was all cleaned out, he went out for some firewood as the boys in the classroom fired off spit-balls at each other and horsed-around.

However, some of the boys wanted to have more than a little fun in the form of a prank. Here we pick up the story in Dominic Savio - Teenage Saint, by Fr. Peter Lappin:

"Say!" exclaimed one of the boys, suddenly. "Know what?"

"But it's already fixed. Savio fixed it."

"Yeah, but not the way I mean," said the first. He rose, went outside, and returned with his arms full of large round stones. He dropped them heavily on the floor. Then he lifted the lid from the stove, took out the biggest sticks, and to the surprise of the others, put the stones in their place. He closed the stove, put the extra wood on the pile, and came back to his desk. All comments were cut short by the opening of the door.

Father Cugliero unwound the folds of his large, black cape and immediately gave his attention to the stove. Rubbing his dry palms noisily together, he bent down and opened the little iron door. He was so used to the routine he did not even look to see if the fire had been laid. Instead, he applied a lighted match to the paper in one or two places, waited until the paper was well lit, then threw the match into the heart of the flames and banged the iron door shut.

He looked up sharply. Had he heard something - a giggle? He must have been mistaken. Every head was bent over a book and lips were moving urgent, whispered preparation.

Turning to the textbooks on his desk he took up the one on top, opened it at a marker, and with his back as close as was convenient to the fast-warming stove, commenced the morning session. As question and answer continued, he began to sense rather than feel that things were not quite what they should be. He was inclined at first to attribute this uneasiness to a vague air of distraction in the class. If only he could put his finger on the trouble! The thought then occurred to him that there might be something wrong with himself. Finally it came to him - he was still cold. Perplexed, he turned and put his hand close to the stove. He touched it with his finger tips, gingerly at first, then laying his palm flat on the smooth top. It was stone cold! Amazed, he raised the lid and peered inside. Down at the bottom lay a grayish mass of crinkled, burned paper, over small pieces of kindling that still gleamed with dying sparks. On top of all this lay four or five large round objects blackened by the smoke. These had crushed out the fire.

The teacher glared at the class. They stared back at him in wide-eyed innocence.

Still no one answered, so he decided to go about his investigation more methodically.

"Who's responsible for the stove this week?"

"Savio?" cried the priest, hardly able to believe his ears.

Dominic came up and stood before him.

Dominic refused to answer the priest's question and instead hung his head.

The book goes on to talk about Father Cugliero's great disappointment. He recollected the saintly boy's First Holy Communion. Father wondered if he had been corrupted since that day. How could he play such a mean trick without the courage to own up to it.

Father softly and slowly explained his disappointment in the young boy. The priest would have punished him far more severely had it been anyone else, but instead had him kneel for the rest of the period until recess. All of the boys were unusually quiet as Dominic knelt in the center of the room.

Before recess began, a group of boys approached Father Cugliero and told him that it wasn't Savio. We go back to the book again:

Father Cugliero glared at the faces staring at him over the desk. They didn't know who it was, but they knew it wasn't Savio. How very odd! He decided, nevertheless, not to press the point. Instead, he dismissed the boys called and Dominic up again.

"Savio, was it you who put the stones in the stove?"

But this time Father Cugliero insisted.

"Then why on earth did you not say so at first? I'd soon have found the culprit and...."

"Well, sir, the one who did it was already on his last chance, and if you'd found it out, you'd have sent him home. It would only have been my first chance and I knew you'd let me off with something lighter. Besides," he added, lowering his eyes, "I thought of our Lord when He was unjustly accused. He didn't say a word either."

Father Cugliero was immensely relieved for a moment at the boy's explanation. Then he grew even more indignatn than before, not at Dominic this time, but at the others who had allowed Dominic to suffer for the trick they had played on him.

"Do you know what I'll do?" he said, breathing rather heavily, "I'll get the name of everyone who had a hand in this business and I'll..."

"Father," interrupted Dominic, "Do you think you could let them go just this once?"

Dominic smiled and put all the appeal he could muster into his entreaty. He would have suffered more htan the boys if they had been punished.

Father Cugliero looked at him for a moment, and then fought back a smile on his own face.

"Well," he answered as gruffly as he could, "since it's for you. Just this once. But you won't save them the next time."

More posts from the "9 Days with St. Dominic Savio"

Post 1 contains the novena prayer, as well, at the bottom.