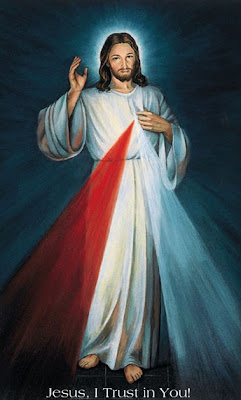 What is Divine Mercy?

The message of The Divine Mercy is simple. It is that God loves us — all of us. And, he wants us to recognize that His mercy is greater than our sins, so that we will call upon Him with trust, receive His mercy, and let it flow through us to others. Thus, all will come to share His joy.

The Divine Mercy message is one we can call to mind simply by remembering ABC:

A - Ask for His Mercy. God wants us to approach Him in prayer constantly, repenting of our sins and asking Him to pour His mercy out upon us and upon the whole world.

B - Be merciful. God wants us to receive His mercy and let it flow through us to others. He wants us to extend love and forgiveness to others just as He does to us.

This message and devotion to Jesus as The Divine Mercy is based on the writings of Saint Faustina Kowalska, an uneducated Polish nun who, in obedience to her spiritual director, wrote a diary of about 600 pages recording the revelations she received about God's mercy. Even before her death in 1938, the devotion to The Divine Mercy had begun to spread.

The message and devotional practices proposed in the Diary of Saint Faustina and set forth in this web site and other publications of the Marians of the Immaculate Conception are completely in accordance with the teachings of Church and are firmly rooted in the Gospel message of our Merciful Savior. Properly understood and implemented, they will help us grow as genuine followers of Christ.

Spend time to learn more about the mercy of God, learn to trust in Jesus, and live your life as merciful to others, as Christ is merciful to you.

Some interesting things from the Divine Mercy Timeline:

March 7, 1992 Decree of Heroic Virtues of Sr. Faustina is promulgated.

December 1992 Miracle through intercession of Sr. Faustina is accepted.

May 5, 2000 Congregation for Divine Worship and the Discipline of the Sacraments issues a Decree proclaiming the Second Sunday of Easter also as Divine Mercy Sunday.

December 2000 The Congregation for Divine Worship and the Discipline of the Sacraments listed the Devotion to the Divine Mercy in its Directory on Popular Piety and the Liturgy: Principles and Guidelines.

April 22, 2001 Divine Mercy Sunday is celebrated officially for the first time by the universal Church.

May 13, 2001 Congregation For The Clergy issues a document: "Priest of God, you embody the Mystery of Mercy."

August 18, 2002 John Paul II consecrates the whole world to the Divine Mercy from The Divine Mercy Sanctuary in Krakow-Lagiewniki, the site of St. Faustina's tomb.

August 21, 2002 Decree of the Apostolic Penitentiary issued on Indulgences attached to devotions in honor of Divine Mercy.

What about Divine Mercy and Scripture?

One of my favorite Catholic artists is Tommy Canning of the UK who had come to the first Call to Holiness conference I attended in 2005. I cannot show you the artwork here as it is right-click protected, so I encourage you to go straight to his website to view it. Click on a given pic to enlarge. 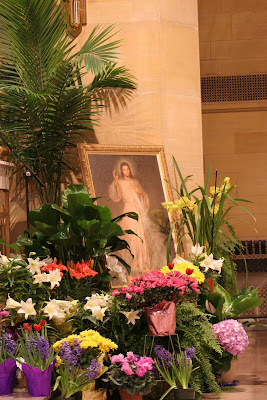 
***Support the Dominus Est Project***
Posted by Diane Korzeniewski at 12:01 AM