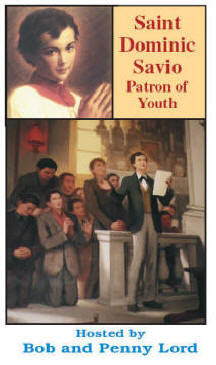 Continuing with another story from the 1954 book, Dominic Savio - Teenage Saint by Fr. Peter Lappin, we look at a duel between quarreling boys and how Dominic courageously brought it to a safe ending.

In the 1800's quarrels were settled with duels. Duels typically made use of firearms. But, many of the poor boys could not afford them and so they had duels using stones. This could be very dangerous and damaging to say the least.

Well, Dominic caught wind that a duel between quarreling boys would be taking place and made it a point to find out where it was at. He did not run and tell Don Bosco as some thought he might. But, he knew it was displeasing to God because it involved hatred between the two boys and did not want to see anyone hurt.

First, Dominic wrote a letter to the boys trying to convince them not go through with it. When that failed, he told them he wanted to come to see it. He promised not to tell Don Bosco - a promise Dominic never broke. One of the boys involved in the duel later told the saintly priest about the incident.

When the boys arrived at the chosen place, Dominic had communicated that he would not squeal, but on condition - a condition he would not reveal just yet.

The boys had assembled with 20 stones at each of their feet, only 20 paces apart from each other. Dominic knew this could be a slaughter. Dominic was charged with giving the signal and as the time grew near, he began to fumble around in his pocket. He knew they were waiting impatiently and reminded them that he still had a condition to lay down.

From his pocket, he pulled up his hand holding high into the air, a crucifix. He shouted to them to start throwing and he braced himsef. Everyone paused and Dominic rushed over to the bigger of the two boys:

"Here's the condition," he said. "You've got to throw the first stone at me and say: Christ died innocent and pardoned His enemies, but I want my revenge."

This knocked the boy off his balance.

Dominic went up to the other boy.

"All right then, you go first."

Dominic then spoke warmly to both of them and showed them how foolish they were to act this way. in the end, he forced the boys to make up and shake hands and walked away from the filed with a duelist on each arm.

Sculptors and painters have preserved the memory of Dominic standing in this position and holding up a crucifix.

Seems to me that Dominic was just over 12 years old when this took place.

More from 9 Days with Dominic Savio

Novena prayer to St. Dominic Savio whose feast day is March 9th can be found at the bottom of "Day 1".

Day 1: The pint-sized boy and the Missal
Day 2: "Death before Sin!"
Day 3: Patron Saint of the Falsely Accused
Day 4: The Saint Meets a Saint