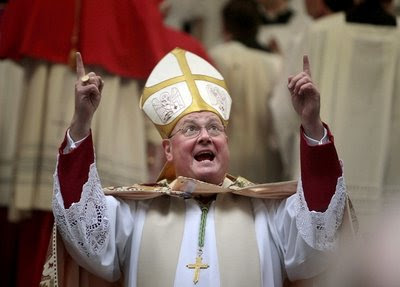 The most popular picture, thus far, of Archbishop Timothy Dolan, taken at Vespers last night on the eve of his installation in New York (Reuters).

I've not been posting much due to the fact that I have not been home much these last few days, and when I was home, I had to work on a growing backlog of media which needed editing.

I regret not being able to cover some things happening out there that are of great interest. Even though I do not have time to post on them, I am quite aware because I do my usual scans of certain sources. This is why I urge people to use multiple sources if you want to keep up on Catholic news. Much of it gets repetitive anyway. I hope to provide some different things here rather than just repeat what you can find on dozens of other great Catholic blogs.

First, check out my photos from the Triduum in Extraordinary Form at Assumption Grotto if you have not yet seen them.

Second, I want to point out once again in passing, that the Helpers of God's Precious Infants next quarterly vigil is coming up quick, on April 25th, and will begin at St. Edmund's in Warren (12 Mile Rd, just east of Schoenherr). I will post the flyer with details on this in a day or two. On a related note, there is now a Helper's of God's Precious Infants of Michigan group in Facebook.

Thirdly, this Sunday is Divine Mercy Sunday and Grotto will once again have an orchestra Mass, this time at Noon. It will be followed by Exposition until 3:00 with devotions. The ushers will be having a pancake breakfast that afternoon, until 2:00pm. So, come, and stay a while. I believe Fr. Perrone has moved the EF (aka "tridentine") Mass to the Noon hour to go with the Orchestra Mass.


Lastly, I want to direct you to some interesting coverage. Check out these newslinks and blogposts: