I've written before about how I object to militant methods used to protest abortion. The absolute objective of the pro-life movement, in my humble opinion, is to win the hearts of current pro-aborts, through prayer, faith, and reason. It is why I join the Helper's of God's Precious Infants on their vigils when I can. I believe wholeheartedly in their methods and I have witnessed the results: women turning away from abortion, not due to intimidation, but due to those things - prayer, faith, and reason.

This post is a copy of the post made at the Helper's of God's Precious Infants of Michigan blog. 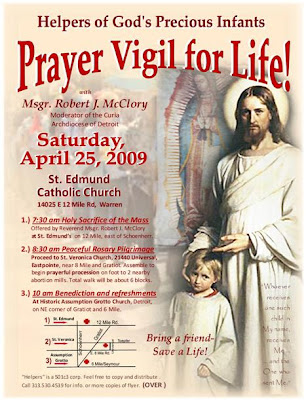 Click the pic to enlarge for details and map

The first prayer vigil of 2009 by Helpers of God's Precious Infants will be be on April 25th at St. Edmund's in Warren. Msgr. Robert McClory, Moderatorof the Curia for the Archdiocese of Detroit, will be the main celebrant for the Mass which starts at 7:30am.

Following Mass, the group will meet at St. Veronica's in Eastpointe where a peaceful, prayerful procession to two abortion clinics a few blocks away on 8 Mile Rd will take place. All 20 mysteries of the Rosary are prayed between the procession to, at, and from the abortion clinics.

Our protestant brothers and sisters, and others who value life are welcome. You can just join us in silent prayer as we process. However, if you look closely at the Rosary - often misunderstood by protestants - it is scriptural (look closely at the first joyful mystery as an example).

People may then return to Assumption Grotto about 1.5 miles from St. Veronica's where Benediction will take place and a brief followup meeting with refreshments will take place.

More about Helpers of God's Precious Infants
While large prayer vigils with up to 300 people take place four times yearly, the work of the Helpers is nearly a daily task for sidewalk counselors, and a 24/7 task for it's prayer warriors. Mass, Eucharistic Adoration, and the Rosary are core components of prayer. Each vigil is led by a bishop or monsignor of the Archdiocese of Detroit, with periodic visitors. Msgr Philip Reilly - the founder - also makes it a point to try to get around to the various chapters in the world. He has visited Detroit and we hope to be blessed with yet another visit.

Helpers of God's Precious Infants is an apostolate which uses gentle and caring methods to counsel young women and their partners into giving life as they go to abortion clinics. It is not a protest. It is rooted firmly in prayer not only for those seeking abortion, but for their families, the doctors, nurses and administrators of the clinics. They are very successful in their work, with men and women who chose to turn away from abortion coming back to thank them for the child that entered their lives by saying "yes" to life. They can share stories of these people coming back to the clinic just to show them the baby they saved through their love-filled efforts.

Skilled sidewalk counselors are there guiding them the men and women to resources that will aid them in many ways through the pregnancy, and after, as opposed to simply trying to stop the abortion alone.

The Helper's counselors do not scorn those who have gone into the clinics to have abortions in spite of their efforts. They offer them continuing prayers and post-abortive materials, knowing about the emotional and spiritual scars suffered by them later. The Silent-no-More Awareness Campaign - a large group of post-abortive women - gives witness to these painful facts.

Many young women are forced or coerced into killing their unborn babies by parents, boyfriends, and others - some of whom threaten violence against the women if they do not go through with the abortion. Hence, it is often not they who make the choice, but someone else who is making it for them. We must keep them all in our prayers.

Others are led into abortion by ignorance, with the belief that what is being removed from them is part of their own body - a piece of tissue, rather than an individual human life with it's own genetic code. As Catholics, we believe that God gives a person their soul at the moment of conception. This ensouled human being was created by God Who desires very much that she be brought into the world to be baptized and give glory to He Whom authored her life.

The Helper's of God's Precious Infants are in front of certain abortion mills during all hours of operation. They are always in need of people willing to be trained as counselors. You may only need to give one hour or two hours per week. They are also looking for people to serve as prayer warriors.

Further, there are many abortion clinics in Michigan and The Helpers of God's Precious Infants of Michigan mainly covers the two clinics on 8 Mile Rd (one in Detroit and the other in Eastepointe). The Helpers work throughout the week in front of these clinics, but hold prayer vigils about 4 times yearly, some of which are at other clinics in metro Detroit. There are many more clinics and too few people to cover them all. If you want to start a group for another clinic in the area, associated with The Helpers of God's Precious Infants of Michigan please contact Dan Goodnow, the President (Tel: 313-530-4539), to learn how.

To see extensive coverage in photos, click on the HGPI-Michigan label at the blog, Te Deum Laudamus! and scroll there through the many photo posts.

To see a video of Msgr. Reilly explaining the Helpers of God's Precious Infants, their mode and methods, follow this link: Founder of Helpers, Msgr. Reilly on Gloria TV

You can read more about the nature of their work on this page of the Brooklyn, NY site.

EDIT: Dan Goodnow was interviewed on Teresa Tomeo's Catholic Connection on Ave Maria Radio on April 9th. You can hear the recording here. 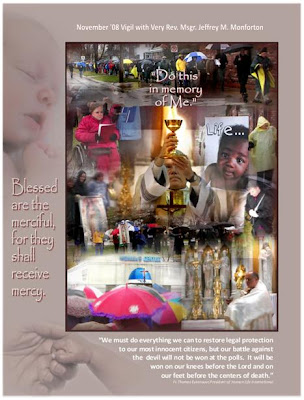