Collection of Holy Week Pics at Assumption Grotto and Amazing images out of St. John Cantius 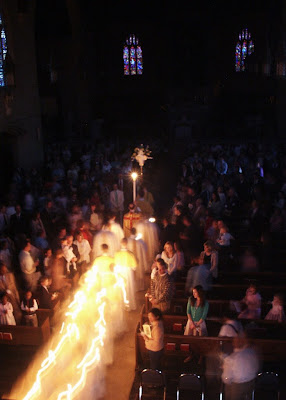 This most stunning picture was captured at the Easter Vigil in 2006 when Mass as in the Ordinary Form. I was unable to match or beat this scene in subsequent years. What made it so beautiful is that I was focused on the bearer of the Paschal Candle, Fr. Eduard Perrone - the pastor. He was stationary, but the altar boys, carrying small candles, were in motion. Because it was dark, and because of the aperature I chose, the shutter stayed open in such a way as to capture a slight starburst from the Paschal Candle, while showing a line of fire behind.

Unfortunately, while the photo looks great on screen or in a small print, it is quite grainy when trying to enlarge it. In the Extraordinary Form, things are done slightly different, but there still is a procession.

Thus far for 2009, I have made the following photoposts:

Stay tuned. God willing, I will have Easter Vigil pictures, but don't expect those until sometime Monday. I will be back at the 9:30am Orchestra Mass (Extraordinary Form) (Ordinary Form) [edit: my error - this Mass is not a traditional Latin Mass, but a Latin Novus Ordo - sorry for any confusion], and then will be cooking dinner for my mother, brother and some relatives. Many people go to this Mass so it is wise to get there a good 20-30 minutes in advance. And, as with most parishes, the Easter Vigil is a long Mass - lasting around 2 hours or more. It starts at 8:00pm. Altar boys will be dressed in their traditional, white cassocks with gold shoulder capes. What I mean by traditional is that it is a custom held at Assumption Grotto going back some time that during Easter season, then again for Corpus Christi, they wear the white with gold. During Christmas season it is white with red shoulder capes.

A word of advice: If you are planning on going to the 9:30am orchestra Mass, you will want to get there early - to the tune of 30-45 minutes, in order to get a decent parking space. It is worth it! Expect the Mass to last no less than 1 hour and 40 minutes.

In addition, I want to direct your attention to some awesome pictures of Holy Thursday and Tenebrae at St. John Cantius in Chicago, where Assumption Grotto has one young man, in seminary. Please keep Brother Matthew in your prayers, as well as all parishioners discerning a vocation to the priesthood or consecrated life!