Extraordinary Form Mass Notes: Kissing the Hand of the Celebrant 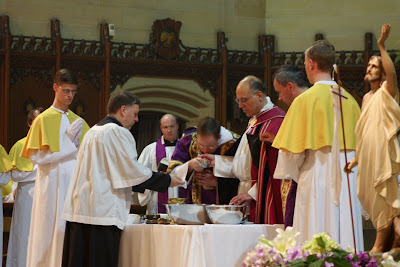 In this photo taken during the 2009 Easter Vigil in the Extraordinary Form at Assumption Grotto we see the deacon of the Mass, Rev. Paul Ward, kissing the hand of the celebrant, Rev. Eduard Perrone. It is repeated several times throughout the vigil and is seen in Solemn High Masses and ceremonies throughout the year, with only a few exceptions.

Since coming to Assumption Grotto in 2005, I have been like a kid in a candy shop with the many things I witness in the liturgy - enough so to drive me to photograph, read, and write about these things. I should have known I was hooked when I began accumulating books written by some of the greatest authors on Catholic liturgy: Adrian Fortescue, Nicholas Gihr, J.B. O'Connell, Alcuin Reid, Joseph Jungmann and, of course, Josef Ratzginer, now Pope Benedict XVI.

"Purposes" and how they evolve in the Liturgy
While I am interested in the "mechanics" of it all, I am often more interested in the spiritual dimensions. Perhaps it is the secular Carmelite in me which gravitates in this direction. For me, it goes right to active participation in the Mass when I am thrust into deep spiritual reflections through ordinary things happening in the liturgy. There is far less written in this area than there is on the mechanics of how to perform these things and when they need to be done.

Some things which were merely intended to have a more practical or mechanical purpose have taken on spiritual dimensions over time, like the maniple worn over the left arm of the priest during Masses (1962 Missal). This ornamental vestment first seen in Rome around the early sixth century is thought to have originally been for the wiping of persperation, but later took on an interesting symbolism: The bonds which held the hands of the Savior.(1) The subject of the maniple alone is worthy of it's own post. However, I merely raise this point here to show how something can have one purpose, then evolve into another with spiritual richness that may yield much upon which to contemplate.

Hidden "purposes" and spiritual dimensions
Before we dive into the subject at hand, we need to pause for a moment and reflect on how sights and sounds affect us in the Mass.

God uses people, things and actions in the church sanctuary to move us in ways that are sometimes subtle or hidden to us.

Now, we can move forward with the subject and hopefully gain something next time we witness it in Holy Mass...

Liturgical Kisses: The solita oscula
There are many forms of kisses made during the liturgy. We can simply call them, ceremonial or liturgical kisses. We are accustomed to seeing the altar kissed by the celebrant, or the kissing of the Gospel during any Mass. But, in the Solemn High Mass in the Extraordinary Form (sometimes referred to as the "Tridentine" - a misnomer(3) - or, the "Traditional Latin Mass"), we see other forms of kisses. Many of the ceremonial kisses made are not even visible to the faithful and we will eventually look closer at some of them in discussions of other topics.

In this post, I want to focus exclusively on the kisses made to the hand of the celebrant during a Solemn High Mass by the deacon or subdeacon. These liturgical kisses are the solita oscula. They are omitted on Good Friday and in requiem functions.(4)

When the deacon directly hands the celebrant certain things like the censor, or even his biretta, he will first kiss the object, then the hand of the celebrant. He merely touches his lips to them briefly (which is why it is often a blur in my photographs). When he receives something from the celebrant, he does the opposite by kissing the celebrant's hand, then the object(5).

There ceremonial kisses can be broken down into two kinds. The Rev. J.B. O'Connell, SJ distinguishes bewteen them in a section written about the Solemn Mass before the Blessed Sacrament Exposed(6) when some are omitted (such a Mass can take place during Forty Hours Devotion) .

As a sidenote, this kissing of the objects and hand of the priest was added during the Gothic period in the 13th century (7).

Spiritual meditations on the solita oscula
The solita oscula should cause us to meditate on the fact that the celebrant is standing in persona Christi (8). Before the Consecration, the hand kissed, is the hand that will turn ordinary bread and wine into the Body and Blood of Our Lord Jesus Christ through the actions of the Holy Spirit. The hand of a priest also brings us anointing with oil when we are sick and absolution through Sacramental Confession. Blessings are received through them, as well.

The solita oscula should also remind us that we need to help our young men to hear God's call for them to the priesthood. Without the hands of a priest, there would be no Eucharist. Think about people in other lands where faith has been wiped out through oppression. That people would go for months or years without having access to a priest is not something limited to earlier centuries. Bishop Athanasius Schneider, ORC - author of Dominus Est - explained to us on a visit to Assumption Grotto how he had received his first Holy Communion in secrecy in Kazakhstan. Without the hands of a priest, people went for months and years without the Sacraments. In many places within the former Soviet Union, many people continue to struggle without priests, as they do in Asia and other areas.

Finally, the solita oscula are a sign that we should have reverence for the priesthood. Priests are as capable of sin as anyone and are not immune to the effects of Original Sin. I am reminded here of the reverence St. Francis showed for priests. The Rev. Thomas G. Morrow explains the story briefly in an excellent article, The Danger of Criticizing Bishops and Priests (9).

...he [St. Francis] would never criticize the priests and bishops—even the most lazy and immoral ones—nor would he allow his friars to do so. (As a result, the Franciscans were always welcome just about everywhere they went.)

Once a Waldensian challenged Francis on his unshakeable reverence for priests, by pointing out the local pastor who was living in sin. “Must we believe in his teaching and respect the sacraments he performs?”

In response, Francis went to the priest’s home and knelt before him saying, “I don’t know whether these hands are stained as the other man says they are. [But] I do know that even if they are, that in no way lessens the power and effectiveness of the sacraments of God… That is why I kiss these hands out of respect for what they perform and out of respect for Him who gave His authority to them.” His challenger left in silence.