There has been a significant development in what has been called, the "Notre Dame Scandal". That is, the invitation of President Obama to Notre Dame to speak at commencements, and to receive an honorary degree.

Some have wanted harsher action - quicker out of the local bishop. Bishop D'Arcy initially responded to the news at the outset by saying he would not attend. Some did not think it went far enough. However, these things will often go through a chain of events, many of them kept private (just as parents handle disciplinary matters involving their children in private, a bishop does the same with members of his flock......up to a point). There can be a flurry of activity going on behind the scenes all the while people think nothing is happening at all.

You will notice in this statement, that the only reason it is being offered publicly is because of what Fr. Jenkins already made public himself and the bishop felt corrections were warranted. And, if Fr. Jenkins had responded with humility and obedience to earlier communications from his bishop, we would not be seeing this. In addition, the Bishop is working to mitigate the scandal already in motion, and to heal the wounds. Now that part of those communications are public, it serves to illustrate what can take place, privately, between a bishop and certain members of the flock who stray.

We will have to watch closely what transpires now that His Excellency has drawn a few clear lines in the sand. He wants action. What will Fr. Jenkins do?

The statement fresh out of Bishop D'Arcy of the Diocese of Fort Wayne-South Bend should not come as a surprise. Yet, it will be a surprise for many who are unaccustomed to witnessing such holy boldness on the part of bishops. It's called teaching. From the CCC:

873. The very differences which the Lord has willed to put between the members of his body serve its unity and mission. For "in the Church there is diversity of ministry but unity of mission. To the apostles and their successors Christ has entrusted the office of teaching, sanctifying and governing in his name and by his power.

And now, the statement released yesterday. My emphases in bold; comments bracketed in red. I will add some links to other posts and commentaries on this at the bottom.

My Dear Brothers and Sisters in Christ,

Recently, Father John Jenkins, CSC, in a letter of response to Bishop Olmsted of the Diocese of Phoenix, who had written him, critical of the decision to invite President Obama to speak and receive an honorary degree of law at Notre Dame, indicated that it was his conviction that the statement “Catholics in Political Life” (USCCB) did not apply in this matter. Father Jenkins kindly sent me a copy of his letter, and also at a later meeting, asked for a response.

In an April 15th letter to Father Jenkins, I responded to his letter.

Now the points made in his letter have been sent by Father Jenkins to the members of the Notre Dame Board of Trustees and have been publicized nationally, as well as locally in the South Bend Tribune. Since the matter is now public, it is my duty as the bishop of this diocese to respond and correct. I take up this responsibility with some sadness, but also with the conviction that if I did not do so, I would be remiss in my pastoral responsibility.

Rather than share my full letter, which I have shared with some in church leadership [hmmm....at the Holy See, or here in the US???], I prefer to present some of the key points.

1. The meaning of the sentence in the USCCB document relative to Catholic institutions is clear. It places the responsibility on those institutions, and indeed, on the Catholic community itself.

“The Catholic community and Catholic institutions should not honor those who act in defiance of our fundamental moral principles. They should not be given awards, honors or platforms which would suggest support for their actions.” — “Catholics in Political Life,” USCCB. [remember, Fr. Jenkins argued this paragraph in Catholics in Political Life did not apply to non-Catholics like Obama. Note that the word "those" emboldened does not limit application to Catholics, but is aimed at "those who act in defiance...."] 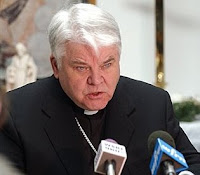 3. I informed Father Jenkins that if there was any genuine questions or doubt about the meaning of the relevant sentence in the conference’s document, any competent canonist with knowledge of the tradition and love for Christ’s church had the responsibility to inform Father Jenkins of the fundamental principle that the diocesan bishop alone bears the responsibility to provide an authoritative interpretation.

4. I reminded Father Jenkins that he indicated that he consulted presidents of other Catholic universities , and at least indirectly, consulted other bishops, since he asked those presidents to share with him those judgments of their own bishops. However, he chose not to consult his own bishop who, as I made clear, is the teacher and lawgiver in his own diocese [he called it out good here]. I reminded Father Jenkins that I was not informed of the invitation until after it was accepted by the president. I mentioned again that it is at the heart of the diocesan bishop’s pastoral responsibility to teach as revealed in sacred Scripture and the tradition. (“Lumen Gentium,” 20; and “Christus Dominus,” 2.) I reminded him that it is also central to the university’s relationship to the church. (“Ex corde ecclesiae,” 27 & 28; Gen. Norm., Art. 5, §§ 1-3.)

5. Another key point. In his letter to Bishop Olmsted and in the widespread publicity, which has taken place as the points in the letter have been made public, Father Jenkins declared the invitation to President Obama does not “suggest support” for his actions, because he has expressed and continues to express disagreement with him on issues surrounding protection of life. I wrote that the outpouring of hundreds of thousands who are shocked by the invitation clearly demonstrates, that this invitation has, in fact, scandalized many Catholics and other people of goodwill. In my office alone, there have been over 3,300 messages of shock, dismay and outrage, and they are still coming in. It seems that the action in itself speaks so loudly that people have not been able to hear the words of Father Jenkins, and indeed, the action has suggested approval to many.

In the publicity surrounding the points Father Jenkins has made, he also says he is “following the document of the bishops” by “laying a basis for engagement with the president on this issue.” I indicated that I, like many others, will await to see what the follow up is on this issue between Notre Dame and President Obama [oh, boy!].

6. As I have said in a recent interview and which I have said to Father Jenkins, it would be one thing to bring the president here for a discussion on healthcare or immigration, and no person of goodwill could rightly oppose this. We have here, however, the granting of an honorary degree of law to someone whose activities both as president and previously, have been altogether supportive of laws against the dignity of the human person yet to be born.

In my letter, I have also asked Father Jenkins to correct, and if possible, withdraw the erroneous talking points, which appeared in the South Bend Tribune and in other media outlets across the country. The statements which Father Jenkins has made are simply wrong and give a flawed justification for his actions.

I consider it now settled — that the USCCB document, “Catholics in Public Life,” does indeed apply in this matter. [The Bishop of the diocese has spoken, definitively - end of discussion!]

The failure to consult the local bishop who, whatever his unworthiness, is the teacher and lawgiver in the diocese, is a serious mistake [do you get the impression that Fr. Jenkins is halfway to the ecclesiastical woodshed?] Proper consultation could have prevented an action, which has caused such painful division between Notre Dame and many bishops — and a large number of the faithful. [great way to put it and spot on!]


That division must be addressed through prayer and action, and I pledge to work with Father Jenkins and all at Notre Dame to heal the terrible breach, which has taken place between Notre Dame and the church. It cannot be allowed to continue.

I ask all to pray that this healing will take place in a way that is substantial and true, and not illusory. Notre Dame and Father Jenkins must do their part if this healing is to take place. I will do my part.

Sincerely yours in our Lord,
Most Reverend
John M. D’Arcy

I've said it before, and I'll say it again: PRAY FOR OUR BISHOPS! Pray that the apostles intercede and bring to them graces - in particular, holy boldness. Pray also for Fr. Jenkins, the Board of Trustees, students and alumni of Notre Dame, as well as all others deeply affected.