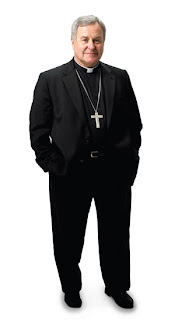 The wait is finally over for St. Louis. There has been much anticipation in the Catholic blogosphere since Archbishop Timothy Dolan's appointment to New York, that the St. Louis vacancy would be filled any day.

Archbishop-elect Carlson will become the 10th bishop and 9th archbishop of the St. Louis. From the homepage of the Archdiocese of St. Louis

Bishop Robert J. Hermann, Archdiocesan Administrator for St. Louis, called Archbishop-elect Carlson “a very energetic, articulate, warm and gifted pastor and administrator. He thinks and works with the Church he loves, and will continue to build upon the legacy of his predecessors here in St. Louis.”

Archbishop–elect Carlson was installed as the fifth bishop of the Diocese of Saginaw on February 24, 2005 at the direction of Pope John Paul II. A native of Minneapolis, MN, he was ordained to the priesthood on May 23, 1970 for the Archdiocese of St. Paul and Minneapolis. He was later ordained as an auxiliary bishop for his home archdiocese on January 11, 1984 and went on to serve as Bishop of Sioux Falls, SD, from 1994 to 2005.

St. Louis became vacant last year when Archbishop Burke was appointed to the Apostolic Signatura, which is like the Church's version of the supreme court, with Burke acting as it's head, much like a chief justice.

Under Bishop Carlson, who took over one of the most liberal dioceses in Michigan, vocations to the priesthood skyrocketed under his leadership. When he got there in 2005, there were no seminarians. In a May 2006 interview, he had this to say:

When I came to this diocese in early 2005, we had no one entering the seminary. Now we have 16 seminarians and I hope to have 20 in the fall. I decided I needed to be the Vocations Director. I think letting the young men know that the Bishop thinks their job is important says something. However, I don’t want you to think I took just anyone. I had to say no to some young men who were interested. The key is knowing what God is calling you to do.

Looking at the Diocese of Saginaw website, there are currently 18 men studying for the priesthood.

I have no doubts that Pope Benedict will appoint another solid man to head that diocese. Bishops being chosen today have the mind of the Church and for this, we should rejoice, and pray, that it continues.

I'm also saddened myself at the loss of Bishop Carlson from the Michigan Catholic Conference. With Bishop Early Boyea recently appointed to Lansing, and Archbishop Vigneron heading Detroit and the conference, I was looking forward to some sound teachings on more issues. I'm sure with whomever is eventually appointed to Saginaw, the Michigan Catholic Conference will be positively impacted.

From the Archdiocese of St. Louis Homepage:

Follow the day's events:
-10:30 am: Watch the press conference online.
-View pictures of the Archbishop-elect, as he visits various locations in the Archdiocese.
-Follow the Archdiocese on Twitter for up-to-the-minute postings.

Related Links (to be updated - check back):