A photo of the bells used during Consecration taken before Mass.
Reflections of Assumption Grotto's interior are seen in the bells.
I took many photos of the visit by Archbishop Raymond L. Burke of St. Louis, who came to Detroit to remember Fr. John A. Hardon, SJ. He also came as head of the Marian Catechists - an apostolate founded by Fr. Hardon. During lunch he discussed the Our Lady of Guadalupe Shrine being built in LaCrosse, Wisconsin - his former diocese, which will be the HQ of the Marian Catechist Apostolate, but will serve many other purposes, as well. It will include a library of Fr. Hardon's materials - which seem infinite. I will be making a more detailed post on both the Marian Catechists and the shrine as I show more photos.

Since there are so many good photos, please bear with me and visit frequently over the next week or so as I make multiple posts with these. Be sure to use refresh.

The Archbishop's flight was late and as we waited, I got additional still shots from around Assumption Grotto.

This was Assumption Grotto's sanctuary around 9:45am. Mass was due to start at 10:30am. 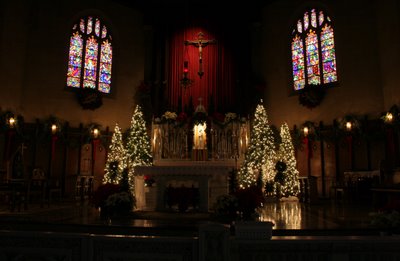 This is a photo of the "Seat of Wisdom" statue of the Blessed Mother. This statue is one of my favorites of all and you will see her in many of the photos taken during the Mass. 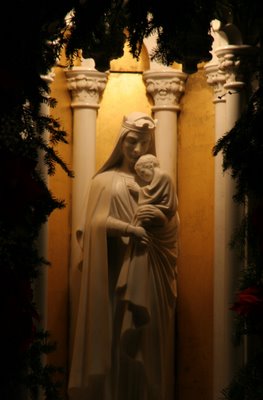 The backdrop, which is normally green, is now red. The sanctuary light is seen burning in the foreground. 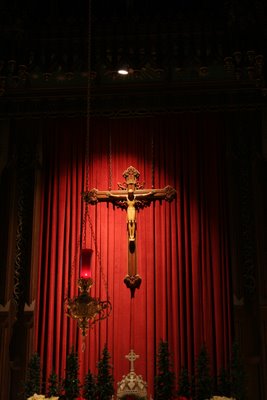 As we waited for Archbishop Burke, several priests heard confessions, and we prayed the Rosary instead of doing it in the afternoon as scheduled. Then, the Archbishop arrived and Mass began.

Photos of the Mass were taken from the choir loft, with a camera mounted on a tripod and with the use of a "cable-snapper". The loft alone vibrates and can sometimes blur a photo even when I'm not touching the camera. I kneel on a chair for those parts of the Mass where kneeling is in order. All is done with the permission of Assumption Grotto's pastor. No flash is used during Mass. It was the one thing Fr. Perrone made clear to me the very first time I asked if I could photograph the Liturgy there in order to give witness to the beauty of the Mass. 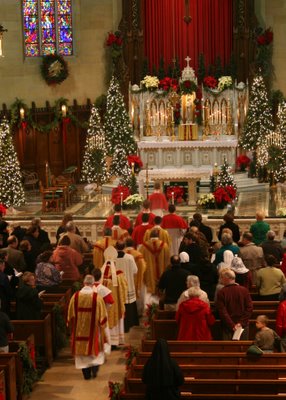 If anyone there wondered where Assumption Grotto's pastor was (since he obviously was not concelebrating) they heard him chant in the choir loft. I love Gregorian chant any way I can get it, but I seem to be partial to a single male voice. Being in the choir loft photographing the Mass made it just too tempting to not capture Fr. Perrone in this mode. I got a few more, which are forthcoming in later posts. 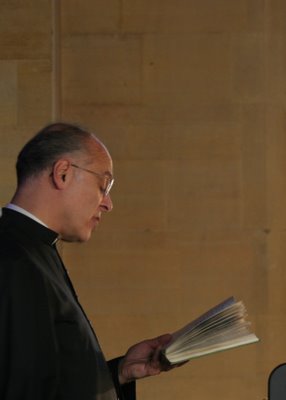 Archbishop Burke celebrated the Mass of Vatican 2, predominately in Latin. There was a little more English than we typically hear at Grotto Masses, but there were also people in attendance who were likely experiencing this for the first time. Latin Mass booklets were provided (with very good translations on the facing page, I might add).

Here we see the Archbishop incensing at the beginning of Mass, with our Deacon assisting. 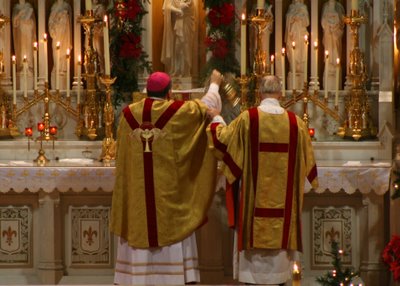 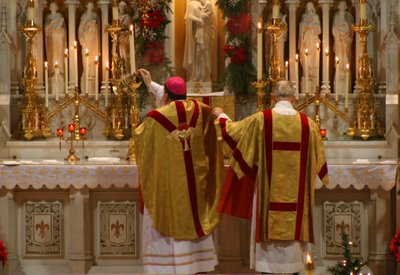 Another photo from the beginning of Mass. From left to right: The Rev. Mr. Jim Wilder, Archbishop Raymond L. Burke, Associate Pastor - Fr. John, and Fr. Titus - a priest of Opus Angelorum. 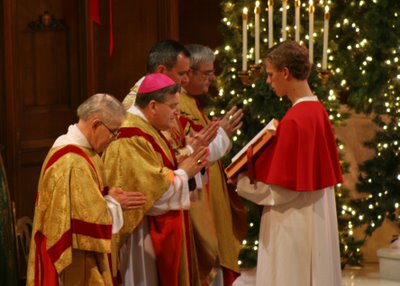 This photo was taken during the Gloria, chanted in Latin. Note the bow at the point that we sang, ".....Domine Fili unigenite, Iesu Christe.... All bowed their heads the second time the name of Jesus Christ is sung in the Gloria, as well: "...Tu solus Dominus. Tu solus Altissimus. Iesu Christe....". I covered this previously in a post entitled, GIRM 275 - Bowing during Holy Mass. It's rarely seen today, even during the Credo, where a profound bow from the waist is to be done at the "et incarnatus est...." 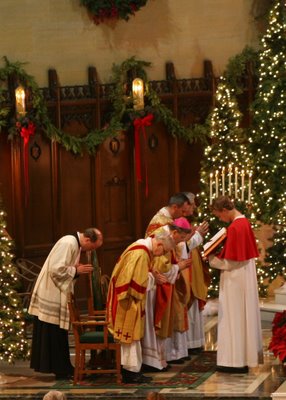 More photos tomorrow. I can't predict how many photo posts there willl be, but it will be no less than 5 spanned over the course of this week. Keep checking my home page for more. Be sure to use "refresh" to ensure you are seeing the latest. You can always get to the Te Deum homepage by clicking the title of the blog.