In a recent post, I mentioned that Catholic actor and producer, Leonardo DeFilippis (scroll down for his bio) was coming to the metro-Detroit area for about a week's worth of stage performances at scattered parishes. It is among several made by St. Luke Productions. One of those was at Assumption Grotto this afternoon, where he played the role of Maxillian - Saint of Auschwitz, among several supporting personalities.

I have never been big on stage plays, but this actor's talents, and the solid Catholic content, had me hooked from the moment the show began. This switch of persons by one man really had me intrigued as it was quite artful and subtle.

I never knew much about St. Maximillian Kolbe, other than he had died in one of Hitler's concentration camps during WWII. With the help of this play, I now understand more about him, the extraordinary circumstances in which he lived - not died, and why he was canonized under Pope John Paul II. Despite the fact that it involved such a sad part of human history, it was not depressing to me, but triumphant in ways that only a believer can comprehend.

They asked that no recordings, pictures, or movies be taken during the performance, but I asked for permission from Leonardo DeFilippis earlier in the afternoon so that I could promote the remainder of the local tour. Photos were taken without flash in order to not distract people while watching. There is some slight loss of clarity in most of these because without flash the shutter stays open longer, and movement related to talking can cause blur. 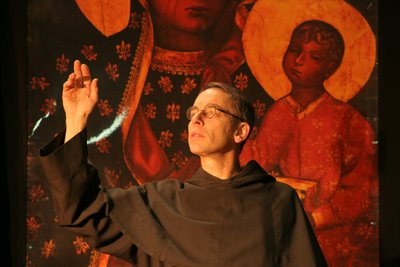 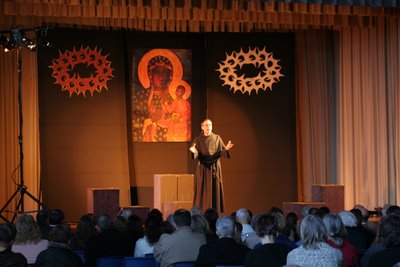 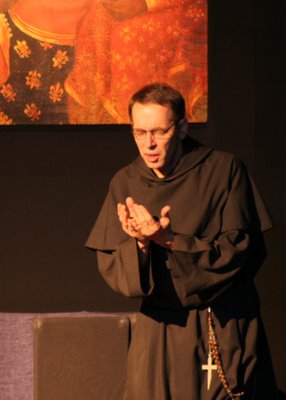 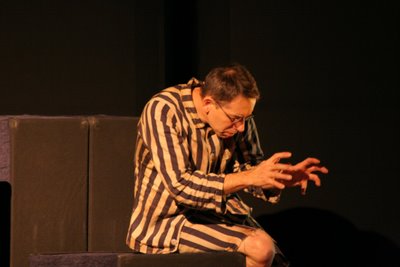 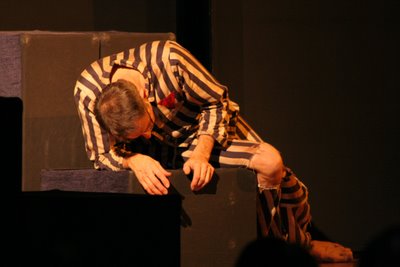 The photo below was taken after the play was concluded, and following a brief bow. He turned to Our Lady of Czestochowa and pointed to her, giving the Blessed Mother her due. This was actually profound for me because it was a visible sign who is ultimately behind this work. Through her come the graces of accomplishment. It is done for her, and through her.

The speech which followed by Leonardo DeFilippis was just as profound, and as moving as the play itself. Being outwardly and openly Roman Catholic in a secular world is something for which we ought never to be ashamed. Just the same, we should never be ashamed of humble devotion to Mary. Whenever I meditate on the actions of matyrs, I can't help but think that while they sacrificed their very lives for Christ and his Church, many of us today are afraid to sacrifice our popularity by going against the grain for what is true and good. 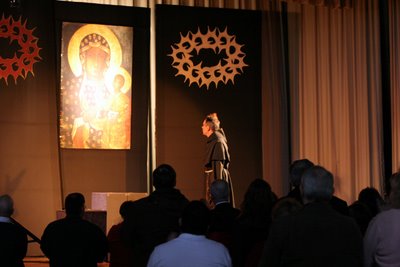 In the lastest newsletter, which you can sign up for at their website (it is not uploaded yet), an urgent appeal is made for donations. If you think they hit the big bucks with the recent movie, "Therese", think again. The cost of distributing it sapped them and they are struggling to continue. If we want movies like this to continue, we need to support them financially and in other ways.

Posted by Diane Korzeniewski at 7:31 PM