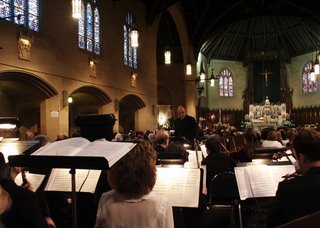 The Orchestra Masses for the Christmas Season are posted. If you really want an uplifting Mass to assist at during this joy-filled season, come to the Grotto for Mass. You have three opportunities to experience Holy Mass with music composed for this purpose by some of the greatest names in music history. All are conducted by Assumption Grotto's pastor, Fr. Eduard Perrone who was studying to become a conductor before hearing his call to the priesthood. Letting go of this musical ambitions to follow the Lord, God later graced him with the opportunity to restore a sense of the sacred in liturgical music....as a priest-conductor in a parish with a liturgical charism. Support this effort by coming to Mass on one of the days listed below.

Fr. Perrone explains the unique circumstances in which this "Russian Christmas" came about in his December 3, Pastor's Descant column.

Posted by Diane Korzeniewski at 6:34 AM