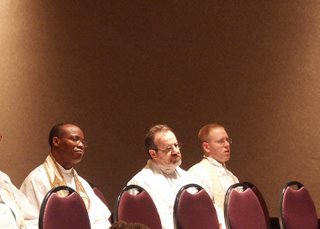 Fr. Andrew Bloomfield (far right above), ordained last year, is exploring the subject of heresies through the works of St. Irenaeus, who lived in the second century, and gives a brief history. This is not an indepth, detailed look, but an overview and he begins his series this week. We will peak in each week to learn a little more as he explores more heresies, and how we might see similarities today. It's a short read and I start you out here with a little more than half. Follow the link for the rest.

St. Irenaeus is perhaps the most important theologian of the second century. As we have seen with the Letters of St. Ignatius, and even the works of St. Justin Martyr, the Church was in her infancy and was suffering persecution throughout the Roman Empire. As such, their works tended to be exhortations to holiness or defense of the Faith. The development of theology, however, was just about to begin. Along with this growth in exploring the Faith came the danger of heresy. Irenaeus responded to the heresies of his time with clarity and firmness.

He was born in the first half of the second century, between 115 and 125 A.D., to a Christian family, most likely near Smyrna in Asia. He seems to have been a disciple of St. Polycarp there; owing to the lively trade with Gaul (modern-day France), the bishop Pothinus was sent as a missionary to Lyons and Irenaeus accompanied him as a young priest. Pothinus was martyred by the Romans, whereupon Irenaeus became the bishop of Lyons. The Roman persecutions were not the only danger to the Church at this time: heresies had also begun to spread. St. Irenaeus of Lyons then began his great work to stamp out heresy and to defend the true Faith until his death sometime around 202 A.D. We celebrate his feast day on June 28th.

Two works remain of great importance: Against the Heresies (Adversus Hæreses) and the Demonstration of the Apostolic Preaching. Against the Heresies is a monumental work of five volumes intended to expose and refute the various Gnostic heresies of the time. As we have seen before, gnosis is the Greek word for knowledge; the Gnostic heresies were different ways of searching for a hidden or secret knowledge that would bring salvation. These heresies would appear to use some elements of Christianity, but their beliefs were completely opposed to the Gospel. Since his work is so important, we will spend a few weeks exploring the teaching of St. Irenaeus and the theology that he develops to refute the errors of Gnosticism.

He begins with clarity about error: “These men falsify the oracles of God, and prove themselves evil interpreters of the good word of revelation. They also overthrow the faith of many, by drawing them away, under a pretense of knowledge [gnosis]” (bk. 1, preface). Continuing, “Error, indeed, is never set forth in its naked deformity, lest, being thus exposed, it should at once be detected. But it is craftily decked out in an attractive dress, so as, by its outward form, to make it appear to the inexperienced more true than the truth itself” (ibid.). How often, even today, are the truths of Christianity mocked by the culture, which would present a more attractive “truth” in its place?

I have been wanting to understand heresies even more after recognizing the possibilities that what is old is becoming new again. Here is an opportunity to get introduced to the subject.
Posted by Diane Korzeniewski at 6:02 AM