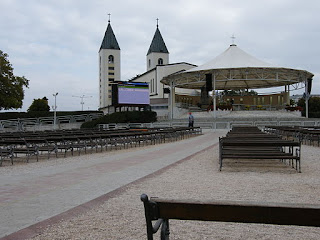 Vatican journalist, Andrea Tornielli, after getting caught using talking points from Medjugorje protagonists, did some backpedaling on what he wrote concerning possible judgments. As was reported earlier, the Commission's findings will conclude at the end of 2012 and be sent to Pope Benedict XVI for further judgment.

See the post by Louis Bélanger which leads to a another post he made earlier, challenging Tornielli.  He also links to the blog of a Franciscan in Italy who publicly challenged the Vaticanist, summing up his argument quite well.  You can get to all of those sources, including Andrea Tornielli's "course correction" from here: ► “Tornielli is wrong about Medjugorje” – Vaticanist agrees…

Still waiting on Tornielli to inform his readers of Bishop Peric's response to attacks against Bishop Zanic.

While I am glad that Tornielli has agreed with his critics about possible judgments, I am still deeply disappointed that he has allowed himself to be taken in by people that will go to great lengths to defend the "gospa" of Medjugorje, even unto suggesting Bishop Zanic, now deceased, was a tool of the communists.  What disappoints me even more, is that he repeats this in his recent writings, even after Bishop Peric wrote a strong defense of his predecessor in the face of these vicious attacks.    I don't know how Andrea Tornielli could withhold this information from his readers which is on the diocesan website in three langauges for about two months now.  Read it in one of these links: [English | Italian | Croatian].

Italian readers: Please ask Mr. Tornielli to share this information with his readers, at the Vatican Insider website.

Further reading on this:

YIKES!  Reactions of some Medjugorje supporters

In the meanwhile, we have something very revealing about some followers of Medjugorje being discussed in a Medjugorje forum thread, after they read Tornielli's latest report on possible judgments (the forum doesn't allow anyone with a critical view to participate.


For those who have found or strengthened their faith through Medjugojre a negative ruling would create a troubling paradox. How does Our Lady's heart triumph if Medjugorje is damaged by the Catholic Church.

Here is another quote from the same thread by another person:

For anyone who has come to know the love of God through Our Lady and the gift of Holy Spirit at Medjugorje, any decision by the Church is irrelevant. It can only be relevant for those who are unsure.

For those who have seen the truth in that valley in Bosnia, Our Lady's Heart can not be damaged by an incorrect or misguided Vatican ruling.

The Holy Father has his work cut out for him.    If there is a condemnation of events, we may very well see a whole lot of arm-chair popes who discern for themselves, something that is reserved to the Church.  Consider the division seen in these statements.  You see, for them they see the Church being the cause of division, from the lady of Medjugorje.  The proper Catholic response, however, is to turn that around.  It is they who seem prepared to divide themselves from the Church, to follow the lady (and they are discussing it in the context of a possible negative judgment).

Who causes division? Satan.  He divides us not from one another, but from the Church.  He is willing to tolerate conversions and devotion as long as he knows that people will become so attached to the phenomena that they cannot detach from it upon a condemnation.   There is an inability to distinguish between true devotion to Mary, which exists above and beyond any apparitions, and what seems to be a form of idol worship (if people persisted in following it, if condemned, and visionaries persisted with manifestations and messages).

Adam and Eve were told not to eat of the forbidden fruit.  It didn't matter how appetizing it looked or how healthful it was, God said, "no".  Likewise, when the Church says, "no", we must yield to the Church.  In the case of a negative judgment, the greatest sacrifice a Medjugorje supporter could offer to God is not a fast on bread and water,  or hours of prayer, but a fiat - a "yes" - to Holy Mother Church.

One last point to make is that supporters often attribute their conversions to the apparitions, and not to the rich sacramental and devotional life they undertake.  All those conversions and vocations - they are real.  But God can draw straight with crooked lines.   What matters most is not how these people came to convert or pursue their vocation, but how they respond to the Holy Father when he pronounces his judgment.  It is either a response of pride, or humility.  Only one of those imitates Mary.
For interesting news items I don't have time to blog on, check out my Twitter Feed: @TeDeumBlog


The obedient are not held captive by Holy Mother Church; it is the disobedient who are held captive by the world!
Note: The recommended links below are automatically generated by the tool, so they are not necessarily related content.I
Posted by Diane Korzeniewski at 8:20 PM