The pseudo-magisterium needs to be neutered.... 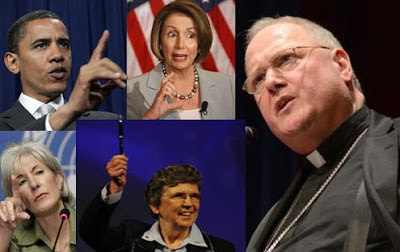 A pseudo-magisterium  is a group of dissenting Catholics, sometimes working with non-Catholics, who hold high-visibility positions in the community, and who compete with Catholic bishops for authority, and other Catholics.

During the round-table on  today's Meet the Press, Joe Scarborough said of President Obama: "He had a unified Catholic front against him, he split that in half now and now he can move on."

Here it is in context:


All you’re doing is shifting the burden to all Catholics now who are all paying for these contraceptive devices that they may–they may find to be immoral. But at the end of the day, this is all the president needs politically because now we have–we have sisters debating bishops, and we’ve got liberal Catholics debating conservatives Catholics. You’ve got Peggy and E.J. now once again …on opposite sides of an issue.


For the president that’s all he needed to do. He had a unified Catholic front against him, he split that in half now and now he can move on. And I agree with E.J. If this debate moves on and stops being about religious freedom and starts being about contraceptives–contraception, then Republicans lose in a very big way.

When Scarborough talks about "sisters debating bishops", he's referring, in part, to Sr. Carol Keehan of Catholic Health Association, who has been in public opposition to the U.S. bishops numerous times. She initially balked at Obama's mandate because it went too far.  Before the president ever got to the teleprompter on Friday to tell the nation about his, "compromise", the Catholic Health Association (CHA) released a statement saying they were, "pleased".  Rather curious timing, no?

The New York Times filled us in on some interesting, behind-the-scenes details late Friday.

“I felt like he had made a really bad decision, and I told him that,” Sister Keehan said of the president. “I told his staff that. I felt like they had made a bad decision on principle, and politically it was a bad decision. For me another key thing was that it had the potential to threaten the future of health reform.”

We also learn from the New York Times:


Tim Kaine, a Virginia Senate candidate and former head of the Democratic National Committee, echoed the concern of Sister Keehan, president of the Catholic Health Association, that it went too far. So did some liberal-leaning Catholics in the news media, like Chris Matthews of MSNBC’s “Hardball,” who called the rule “frightening,” and E. J. Dionne, the Washington Post columnist, who wrote that Mr. Obama had “utterly botched” the issue.
Meanwhile, Sister Simone Campbell, executive director of Network, a group founded by nuns decades ago to lobby on social justice issues, warned White House officials that nearly 500 Catholic activists would be in Washington this weekend for a conference, and that if no compromise had been reached by then, all of them would return to their parishes fired up about the contraception mandate.

“We were getting killed,” one administration official said Friday. The White House picked the deputy chief of staff Nancy-Ann DeParle to talk to Sister Keehan about ways the rule could be made palatable. Meanwhile, administration officials were hearing from women’s rights organizations, particularly Planned Parenthood, who warned that they would oppose any compromise that made employees pick up the tab.

Pitiful, isn't it?  These Catholic religious sisters have put themselves, and their organizations, on the level of the U.S. bishops!  The Obama administration, and many journalists (some of them Catholics), are using them as tools to pit the faithful against their own bishops.  Division and dissent are not fruits of the Holy Spirit.

Catholic, Kathleen Sebelius who heads the HHS, is also a member of the pseudo-magisterium.  Her actions have created grave scandal, and she was told some years ago by her bishop in Kansas, not to approach for Holy Communion and the bishops of Washington D.C. have publicly acknowledged they will uphold that.

Obama is hedging on winning back a number of left-leaning Catholics, but it doesn't appear he will win them all back. Cardinal Mahony isn't buying it.  Here is Michael Sean Winters, who writes for the dissenting National Catholic Reporter discussing his position. He voted for Obama in the last election.  He says he has lost trust in him and does not plan on voting in November.  I hope and pray that he remains with the bishops as we move forward.  If you watch the video, or read the transcript of today's Meet the Press, or manage to find the Fox News Sunday for today, you will get a chance to hear Jack Lew - Obama's new White House chief of staff.  He comes across as downright arrogant in that the administration is done negotiating with Catholics.

Nancy Pelosi some weeks ago, was doing her best to divide Catholics from their bishops.  Consider that the average Catholic is going to get more exposure to Catholicism during the week  from secular sources who often lift the pseudo-magisterium above the voices of the bishops, or at least equal to their voices.  For secular media and politicians, it's perfectly fine for there to be division between Catholics, as you will find in many reports.  We see this in the reporting about Catholic Health Association, which has absolutely no authority.

Faithful Catholics who are watching fellow Catholics be duped by the pseudo-magisterium are calling for bishops to make use of Canon 915 - publicly.  Others are wondering about excommunication.

Some may be wondering who is going to win the battle for authority in the U.S. Catholic Church: The pseudo-magisterium or the bishops.  I know one thing for certain: Jesus promised that the gates of hell would not prevail against the Church, so where does that leave the pseudo-magisterium and it's followers?


Pray for the bishops, and for those Catholics who oppose them causing division among the faithful.


Further reading (list may be updated, so check back):


The obedient are not held captive by Holy Mother Church; it is the disobedient who are held captive by the world!
Note: The recommended links below are automatically generated by the tool, so they are not necessarily related content.
Posted by Diane Korzeniewski at 2:53 AM