On HHS Compromise: Why is Sr. Carol Keehan stepping ahead of US Bishops? 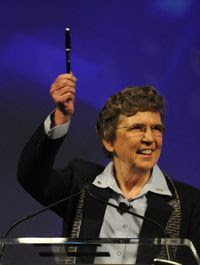 On March 23, 2010, just two days ahead of the Feast of the Annunciation, in which Mary gave her, "Yes!" to God through the angel Gabriel (Luke 1:38), Sr. Carol Keehan of the Catholic Health Association gave her, "Yes" to Obama's health care plan, in direct opposition to the U.S. bishops.

After HHS secretary, Kathleen Sebelius announced the Obama administration's willingness to trample the U.S. Constitution and violate religious liberty, it was good to see Sr. Keehan balk along with the U.S. bishops.

Reports are now saying that Keehan is, "pleased" with Obama's "compromise".  I'll get to that in a moment.

Obama couldn't have created a bigger mess than one who decides to casually stand next to a hornet's nest and tap it with a stick, convinced that the insects will not respond according to their nature.  As of this writing, 171 bishops, representing about 97% of all US dioceses have issued statements, with many ordering them to be read or distributed at Masses.  A growing list of institutions have issued statements, with four filing lawsuits: EWTN, Priests for Life, Belmont Abbey College, and Colorado Christian Univeristy (non-denominational).  Proving that this is a religious liberty issue of interests to others, here are just some of the non-Catholics who have spoken out: Assembly of Canonical Orthodox Bishops of North America, two Jewish groups, and Pastor Rick Warren of the Saddleback Church, along with other protestants.

Signals were coming out yesterday that the Obama administration, feeling the sting of it's decision, was going to issue a compromise - supposedly the one known as the, "Hawaii Compromise".  Today, Obama spoke and it appears to be exactly what Obama has put on the table.  The Becket Fund, which is representing the four institutions above who filed suit stated that it is a "false compromise".

Signals were also coming from the bishops that they were not in a mood for a compromise on religious liberty.  We heard from Archbishop Dolan yesterday in a CBS Morning video (link contains full transcript), who said the HHS decision was, "at odds with the very sincere assurances" Obama gave to himself and to the Catholic Health Association.  In that same video, is this exchange on, "compromise", with Erica Hill (empahsis mine in bold):

HILL: Does- you seemed to open the door. Compromise is kind of a tough word these days. You said if he would expand the definition there. Is that what you would see as some sort of a compromise?

DOLAN: Yeah- I don't know. You're right, that's- Erica, it's good. I don't know if we can compromise. I think that what seems to be - we can't compromise on principle. It seems to be clear now- is that this was a terrible- terribly misguided judgment. So let's not compromise on that. That's almost rewarding bad behavior. Let's simply go back to the starting line, and see how we can live with this without violating conscience or principle. I would prefer the word 'conciliatory.'


Yesterday, Bishop William Lori who heads the USCCB's Ad Hoc Committe for Religious Liberty, released a statement on the USCCB's blog: Referral is Not the Answer, Rescinding the Mandate is.

That brings me back to the question I asked at the beginning of my post: Why doesn't Sr. Carol Keehan of the Catholic Health Association wait for the bishops?   Surely, she was aware of the signals coming out of the USCCB which were not favorable as the blogosphere and Catholic news portals were on fire. 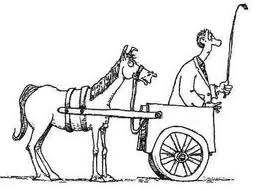 Today we read at ABC News: Both Catholic Health Association and Planned Parenthood say they're pleased with contracpetion rule announcement.


I was unsure if,  perhaps, Sr. Keehan was misquoted.  So, I went to the Catholic Health Association website (which took a while to load), and I found this:

Unfortunately (pr perhaps, fortunately), upon clicking the, "read more" link, I ended up at a dead end.  Let's hope that Sr. Carol Keehan is in the process of trying to get her cart back behind the horse where it belongs.

Does she really think she is going to influence the U.S. bishops by going public with something that has the potential of being in opposition to them - again?

I can't imagine anything more damaging to the fight for religious liberty and conscience protection than to have such public division.  The U.S. bishops, who have finally found their voice, deserve to be heard before dissent hits the ground.

EDIT:  I see that Father Z wondered something similar, but more basic: How could Sr. Keehan have known what the compromise was to approve of it, before Obama spoke?

Cardinal-Designate Dolan released a statement, but it is more of a punt. Don't get alarmed thinking the bishops are yielding... I think there is merit to waiting until early next week to responding, after they are certain of the details in the plan.  When he says it's a "step in the right direction" the "it" he is talking about is NOT the compromise, but the fact that they are showing a willingness to make changes.  My suggestion is that we put our heads down in prayer this weekend for the bishops, not criticize them, as some have done, before the official response is released.
The Anchoress  has a running post which already has links to a number of reactions.

This HHS contraceptive mandate story is one with rapid developments.  I am not in a position to follow everything, everyone is saying. I'm going to recommend that you keep an eye on these portals and sites for updates (some of these may have incredibly slow load times due to the increased traffic and interest).  LifeSiteNews crashed yesterday when DrudgeReport linked to their story on Rick Warren backing the Catholics.


The obedient are not held captive by Holy Mother Church; it is the disobedient who are held captive by the world!
Note: The recommended links below are automatically generated by the tool, so they are not necessarily related content.
Posted by Diane Korzeniewski at 1:16 PM