Card. Puljic: Medjugorje Commission to end it's work in late 2012 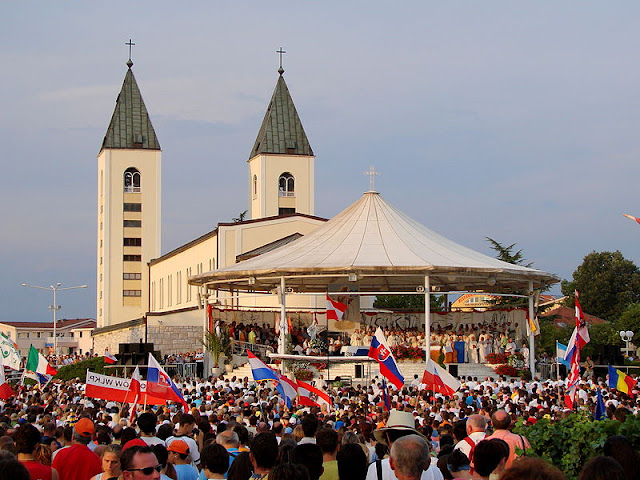 As Medjugorje's Bishop, Ratko Perić, has fended off insidious allegations recently made against his predecessor - that he was a tool of the communists - we learn that Cardinal Ruini's Medjugorje commission will end it's work by the end of 2012.

The Italian News Agency, ASCA, is reporting that Cardinal Vinko Puljić, the Archbishop of Vrhbosna (Sarajevo), also a commission member, stated that the final report will be presented by Cardinal Ruini to Pope Benedict at year's end so that the Holy Father can render his judgment.  Here's the actual news report, translated:

(ASCA): Rome, 14 Feb: The commission appointed by Pope Benedict XVI to evaluate the authenticity of the alleged Marian apparitions at Medjugorje, led by Cardinal Camillo Ruini, is expected to present its concluding report before the end of 2012. "Within the year we want to finish our work and give our opinion to the Pope so that he may express his judgment," said Cardinal Vinko Puljic, archbishop of Sarajevo and member of the commission, during the press conference announcing the Sant'Egidio community's "Meeting for peace" which is to take place next September. "We cannot talk about what the commission is doing, because we are bound to secrecy", the cardinal explained: "Our work is continuing. But we need to finish it this year."   (asp/mpd)   (Translated by Richard Chonak)


That mirrors what the apostolic nuncio to Bosnia & Herzegovina (BiH), Archbishop Allessandro D'Errico, said to the people of that nation on March 17, 2010.  The nuncio, referring repeatedly to Medjugorje as, "a question" had this to say back then:


The Holy Father personally knows it very well and he has told me that several times - he is well acquainted with the whole phenomenon. He knows about the great good that is being done in this region by the priests, the Franciscan friars, and the laity. And on the other hand he asks himself how come there is information in such opposition to this phenomenon.


An interesting side note is that you will find other versions of Archbishop D'Errico's message online, but curiously missing from those translations offered by pro-Medjugorje sites is the word "question", which is in the Croatian taken from the BiH Bishops Conference website at the time.  Supporter translations also make the last line sound like the Pope can't understand how anyone could oppose Medjugorje (by omitting, "on the other hand",  and creating one sentence from two).  Readers can draw their own conclusions about why anyone would want to distort the words of a papal nuncio.

Judgment is coming while visions are ongoing?

You will find many well-intentioned people saying that the alleged apparitions cannot be judged while ongoing, or that they must end before judgment can be made. This is only half-true.  The Church will not approve alleged phenomena, while ongoing, but there are plenty of events which have been condemned as not supernatural, while ongoing.  The most recent example are those affiliated with Holy Love Ministries, where Bishop Lennon of Cleveland condemned them as not supernatural in clear ecclesial terms in November of 2009, and his judgment was made at the request of the Holy See. Anyone doubting it's status can mail the Congregation for the Doctrine of the Faith and if they get a letter referring them to Bishop Lennon's decree, they can rest assured that his judgment, is the judgment of the Church.

Last year, four Croatian, pro-Medjugorje journalists openly accused the late Bishop Žanić of conspiring with the communists against the alleged apparitions in a new book entitled, The Mystery of Medjugorje (only in Croatian at this time).  I was very disappointed to see the renouned Vatican journalist, Andrea Tornielli, citing the book in Italian media, lending credibility to accusations, that when examined closely, are utterly ridiculous.

The claims make no sense from a fact-finding standpoint; andl from a standpoint of reason, it is even worse. I wondered if it might prompt the Holy See to act sooner, given that supporters are willing to descend to such a disappointing level to defend Medjugorje.   I anxiously await the judgment of the Holy Father and hope publishers will think twice before agreeing to translations of this book, especially before the Pope speaks.  I can't fathom the Blessed Virgin Mary approving of people trashing the local bishops, even if she were appearing.   If anything, such behavior of followers does nothing to advance a favorable discernment by the Church.


Medjugorje researcher, Louis Bélanger, now retired from the University of Montreal, took Mr. Tornielli to task on September 19, 2011.  The Vatican journalist responded in his combox on September 20th and what he said there, drew additional questions from Bélanger, also in the combox (start at the very bottom and work your way up).  He challenged Tornielli, thus:

My main point is that you convey the allegation that the Secret Service so heavily influenced Mgr Zanic’s decision that he changed completely his position from January 1982 — does the choice of that date point to a specific historical document? — making him a tool of the communist regime, thus its marionette concerning Medjugorje. As if the Ordinary had no legitimate intimate intellectual, spiritual and pastoral motive for the change of his initial spontaneous and positive assessment of the supernatural quality of the Medjugorje events — completely independent of the regime’s political stratagems.


Tornielli never responded to the challenges by Bélanger.

On December 31 2011, Bishop Ratko Perić published a stunning rebuke of the book, also citing the same paragraph from Bélanger.  Near the opening of his public statement he writes:

In sum, according to the UDBA report, Tornielli says, it turns out that “Bishop Žanić was ready to accept any document against the Franciscans and against the apparitions, even if it was of suspect origin.” Very grave accusations.


The UDBA was the Yugoslav secret police.

The bishop then offers his analysis of the Croatian book at the heart of the controversy.  He writes:


Since the late bishop Pavao Žanić is mentioned in numerous pages of the book “The Mystery of Medjugorje” (MM), and not in a complimentary way, it is our duty, for the love of truth and out of respect for Bishop Pavao, who was a bishop in Herzegovina for 23 years, to respond to such arbitrary claims and insinuations.


I strongly suggest taking the time to read what Bishop Peric has to say about these allegations, which have made their way into blogposts and promoter sites, as if fact.  It has served only to deepen divisions.  Go to the Diocese of Mostar-Duvno website to read the detailed analysis by Bishop Perić, which was translated by Richard Chonak.


When one googles, "Medjugorje", they are met with dozens of links to pro-Medjugorje sites which basically offer messages and fuel the wave of enthusiasm related to the phenomena.  "Details" they have are often highly subjective (and much hear-say); and, the dominant argument is, "the fruits".  There are only a handful of websites which take a look at the events themselves, objectively, which is what the 1978 criteria for discernment of apparitions begs any bishop or commission to look at first.  Below, I provide some of those.

A baby is always a good fruit, regardless of how he or she comes into being.  But, the event involved may not be a loving relationship between a mother and father who were joined in sacramental marriage. Rather, we know the baby may have come into being through fornication, adultery, rape, in a test tube, and many other ways which are not pure.  The baby is a good fruit, and is pure, but the process involved - the event - was not.   And so it is with any alleged apparition.   At every condemned apparition that I'm aware of, are testimonies of people who were converted, found their vocation, increased their prayer and sacramental life, etc.  These things do not make the thing true; investigation of events and facts is what leads the Church to discern the truth.  Everyone should  pray, not that the events of Medjugorje be approved or condemned, but that the Holy See discerns the truth and makes that known to the people, out of love, charity, and justice.


Document and Event-Based Websites on Medjugorje


I also recommend to you, The Hidden Side of Medjugorje, by Fr. Ivo Sivric, OFM (edited by Louis  Bélanger), which is a gold source for many other books which use a document and events-based approach to understand Medjugorje.  Donal Anthony Foley's latest book, I also highly recommend.  My review for this is forthcoming in the near future.


The obedient are not held captive by Holy Mother Church; it is the disobedient who are held captive by the world!
Note: The recommended links below are automatically generated by the tool, so they are not necessarily related content.
Posted by Diane Korzeniewski at 5:02 PM