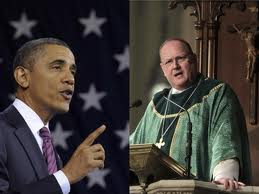 The HHS mandate is generating many stories - way too many to keep up with. Here are just some of the video interviews and stories floating out there on the HHS mandate which has the U.S. Catholic bishops.

This is likely to be updated, so keep checking the link for add-ons: 13 Catholic (and Christian) Institutions Opposing Obama/HHS Mandate (Tom Peters/Catholic Vote)

EWTN, represented by the Becket Fund for Religious Liberty, files suit against the U.S. government

Secular, business newspaper journalist |  Time to admit it: The Church has always been right on birth control (Business Insider).  Would that all bishops and priests spoke with such clarity!  In fact, I would ask clerics, bishops included, to think about when they last spoke about this issue with this kind of clarity from any pulpit. Let's not let yesterday's negligence result in silence from this point forward.

ACLU: Promoting the Rape of Boys is Protected; Living According to the Catholic Faith is Not (Tom Crowe/Catholic Vote)


Why the Pope's army will not kneel to the HHS mandate (Dan Burke/N.C. Register Blogs)

The ball is in the bishops' court (Russel Shaw/OSV)


Did Daley leave WH because of the HHS mandate? (Elizabeth Scalia)

Contraception: Why Not? Some background on why the Church - and Catholic employers - are resisting the HHS contraceptive mandate (National Catholic Register editors) - N.B. please don't confuse the Register, which is owned by EWTN, with the Reporter.


The obedient are not held captive by Holy Mother Church; it is the disobedient who are held captive by the world!
Note: The recommended links below are automatically generated by the tool, so they are not necessarily related content.
Posted by Diane Korzeniewski at 2:59 PM