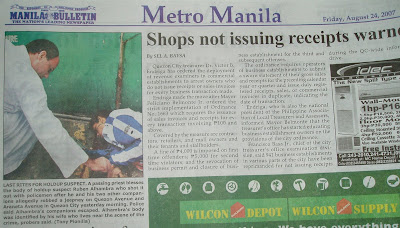 A missionary priest is caught on camera anointing a robbery suspect who was shot dead. As pointed out by Fr. Edward McNamara on Zenit last year:

"...if a person is apparently dead but the priest 'is in doubt whether the sick person is really dead, he can give him the sacrament conditionally.'"

While someone may appear dead visually, without sophisticated equipment it can be hard to say that someone's heart has stopped beating and the brain has ceased activity. Canon 1005 says:

If there is any doubt as to whether the sick person has reached the age of reason, or is dangerously ill, or is dead, this sacrament is to be administered.

This story also had me reflecting about my own attitude of such people (the robbery suspect). We don't know the state of someone's soul as they are dying. Even if in the midst of doing something wrong, a person may repent in his final moments and for this we can always pray for our loved ones, and for strangers. The sins of some are readily visible, but less visible sin can get anyone into hell if it is grave and they leave the world without repenting.

Nothing is beyond God's mercy and forgiveness. For that, we have the Sacrament of Confession which should be used frequently. Bewteen confessions we should be doing a daily Examination of Conscience and Act of Contrition. If we uncover a serious sin, we should go to Confession as soon as is practical.

Te Deum Laudamus! Home
Posted by Diane Korzeniewski at 5:18 AM