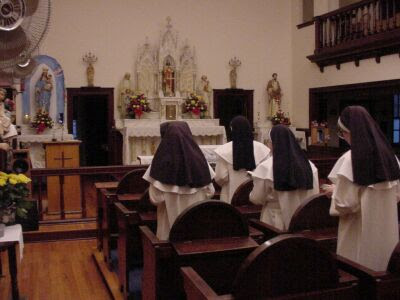 First on September 14th, news broke about a declaration of excommunication incurred by members of the Army of Mary - a seemingly traditional and orthodox society, now considered a heretical one by the Vatican. Heresy and disobedience are far from orthodox, no matter how traditional or devout they are. The Vatican had been involved in a 6 year investigation, along with Canadian bishops, of the Army of Mary which has its base in Canada, and they found things that put up all kinds of red flags. Among the most notable, is that the 86 year old founder claims to be a reincarnation of the Blessed Mother. For heaven's sake! How can any Catholic not see that this is heretical?

In 2001, the Canadian Bishops made a doctrinal note on the Army of Mary citing a list of troubling qualities. The Congregation for the Doctrine of the Faith (CDF), which was headed by Josef Cardinal Ratzinger - now Pope Benedict, joined the investigation.

Now, 6 nuns at the Sisters of Our Lady of Charity in Hot Springs, Arkansas have refused to let go of the Army of Mary after being counseled on the matter by diocesan authorities on the heresy involved (in other words, they chose disobedience over humble, Marian obedience), and have thus have brought upon themselves excommunication.

The website has a link to the Community of the Lady of all Nations, which is affiliated with the Army of Mary.

There are various affiliations which the CDF has named as follows in it's declaration (the first link above):


"THE COMMUNITY OF THE LADY OF ALL NATIONS,"
AND OF ITS WORKS: "THE ARMY OF MARY",
"THE FAMILY AND COMMUNITIES OF THE SONS AND DAUGHTERS OF MARY", "LES OBLATS-PATRIOTES", "L’INSTITUT MARIALYS"

From CBS News: [emphasis mine; my comments in red ]


The six nuns are associated with the Good Shepherd Monastery of Our Lady of Charity and Refuge in Hot Springs. Sister Mary Theresa Dionne, one of the nuns excommunicated, said the nuns will still live at the convent property, which they own.

"We are at peace and we know that for us we are doing the right thing," the 82-year-old nun said. "We pray that the church will open their eyes before it is too late. This is God's work through Mary, the blessed mother, and we're doing what we're asked to do." [Translation: NON-SERVIAM! I will not serve! Sorry Sister, but Mary was the model of obedience and can't be too pleased with this choice.]

At a news conference, Hebert said the nuns "became entranced and deluded with a doctrine that is heretical." He said church officials removed the Eucharist - which Catholics revere as the body of Christ - from the monastery on Tuesday night. [How terribly sad that they still don't see their non-serviam - God have mercy on them.]

In the same article:

A spokesman for the Army of Mary called the excommunication of the nuns and the other members of the sect an injustice. Father Eric Roy said Giguere has not claimed to be the reincarnation of the Virgin Mary, and said the 86-year-old Quebec woman "receives graces" from the Virgin Mary and God. "The Virgin Mary took possession of her soul. I would rather say it that way," said Roy, superior general of the Sons of Mary, an associated group. [Possessed by Mary?!?!?!]

Excommunication is not "kicking someone out of the Catholic Church". It is the way that Holy Mother Church lets her children know that they are taking a position on something which seriously jeopardizes their salvation. It is an attention-getter. We can only hope that removing the Eucharist will have sparked some deeper reflection on their parts.

The problem here is that people get caught up in the good fruits, devotions, and other God-pleasing things, and dismiss negative things as nothing to be concerned with. In some cases, it's a matter of people weighing the large amount of good over the seemingly small amount of bad things - a very, very dangerous and presumptuous thing to do. When it comes to private revelations authenticity is verified or negated by alignment, or misalignment, to Catholic teaching. It's one of the very first steps in the discernment process.

This whole episode, from unauthorized ordinations to not accepting the Church's judgment - that the Army of Mary involves heresy (as in not suitable for Catholics), is a good illustration of what can happen when too much stock is put into a private revelation before it has gained full approval. People can't let go when a negative judgment comes down, and this is why the Angel of Darkness likes to use this tactic. He gets Catholics to disobey the Catholic Church, in favor of their own personal judgment. And, I might add, there were good fruits such as vocations, availability of adoration, confessions, etc. People wonder how Satan can make use of seemingly holy things and behaviors. Now it is visible - by using their attachments - even positive attachments - to fall into disobedience.

Folks, even when we don't fully understand why the Church condemns something, we must ascent and accept the decision in humility. We have to consider that we may not have all of the facts considered by the Vatican. In fact, I would not be surprised to learn that there are Catholics involved in one of those affiliations, who were unaware that the founder was claiming to be a reincarnation of the Blessed Mother. 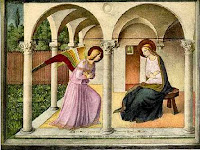 If you are involved with the Army of Mary or any of the other groups named, please - don't get caught playing into Satan's hand through a non-serviam (I will not serve). Meditate on the obedience of Mary: Fiat mihi secundum verbum tuum.

Authentic private revelations do not yield heresy! Catechesis is desperately needed in this regard with the way people follow alleged apparitions and private revelations these days. It's not to say some aren't authentic, but there is a discernment process that must take place and we should never get so involved as to disregard Holy Mother Church when she speaks contrary to our own feelings.

Please join me by including all members of these named groups in your prayers. May humility rule and bring them home for a new beginning.