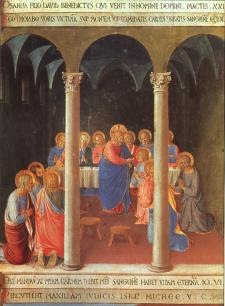 As we follow GIRM 160 since it was first released in the IGMR, we now come to an interesting letter by Cardinal Medina Estevez - then Prefect of the CDW, to the president of the USCCB, Bishop Joseph Fiorenza. The Adoremus Bulletin explains:

EDITOR'S NOTE: On October 25, 2001, Cardinal Jorge Arturo Medina Estévez, Prefect of the Congregation for Divine Worship and the Discipline of the Sacraments wrote to Bishop Joseph Fiorenza, president of the USCCB, detailing the CDW's acceptance "in principle" of proposed adaptations to the Institutio Generalis Missalis Romani submitted to the Congregation for approval after the June 2001 USCCB meeting.

The letter offers suggestions and provisions for approval, and directs that the American adaptations be incorporated into the Institutio, rather than as a separate appendix, as in the present American version of the Roman Missal (or Sacramentary).

A copy of this letter was distributed to bishops and to the press at the November 2001 USCCB meeting.

When the CDW offers "suggestions and provisions for approval", these aren't the kind of suggestions that can be blown off, because ultimately, guess who gives that approval? Not the USCCB. This is a most important point because I have run across some people in various Catholic forums who actually believe that the USCCB can trump the Vatican on such matters. It's the other way around, as I have explained earlier. The Church does not mind the bishops; the bishops must work with the mind of the Church.

In this letter1 from Cardinal Medina Estevez, GIRM 160 is once again addressed. Read it slowly and carefully.

This Dicastery agrees in principle to the insertion into n. 160 of a statement, as apparently desired by the Bishops, that Holy Communion in the United States of America is normally received standing. At the same time, the tenor of not a few letters received from the faithful in various Dioceses of that country leads the Congregation, even after a very careful consideration of such data, to urge the Conference to introduce a clause that would protect those faithful who will inevitably be led by their own sensibilities to kneel from imprudent action by priests, deacons or lay ministers in particular, or from being refused Holy Communion for such a reason as happens on occasion.

When I read this, one thing that jumps out at me are the words, "...as apparently desired....". I like to write, but I'm not good enough to dissect this, but will say that it strikes me as interesting. Does this suggest some doubt as to whether the bishops as a whole truly desired it?

Moving into what I have in bold above, we find what I would call very strong and clear language. Cardinal Estevez encourages the USCCB to include a clause to "protect" the faithful.

Protect them from what?

No dictionaries needed here, nor does one need a degree to understand this. It is very clear English.

What justification does Cardinal Estevez have to suggest that there are imprudent actions happening with regards to how people are treated who are, "inevitably....led by their own sensibilities to kneel"? The justification is the mail that was coming into his office, which he labeled as, "the tenor of not a few letters".

From my point of view, the Cardinal was being very pastoral and very clear.

Remember, this October 25, 2001 letter was distributed to the US bishops in November 2001 AND the press, which I assume included the Catholic press. We can only hope that the laity were getting pieces of this, as well as priests who were reading Catholic news, if it was included as newsworthy. And, it comes after one clarification already in November of 2000, one which perhaps was not as readily visible to such a broad audience.

In my next post, we will look at subsequent communications out of the Vatican on GIRM 160. We're just getting warmed up.