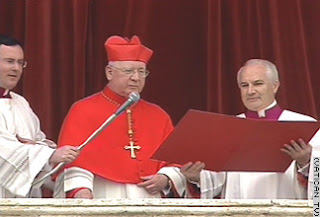 Cardinal Medina Estevez, Prefect Emeritus of the CDW, who wrote the Responsum ad Dubium on genuflecting before receiving Holy Communion (below), is seen here in this unforgettable moment telling the world, "Habemus Papam" and then introduced us to Benedict XVI

In Part One of this topic, we looked at GIRM 160 in it's present form, and as adapted by the Diocese of the United States. It discusses posture during reception of Holy Communion. There have been several clarifications on GIRM 160 in various forms, and we will look at these chronologically, so we will now backtrack.

I want to be careful not to get into all kinds of peripheral topics. In debating this issue with others in Catholic forums over the years, those discussions get sidetracked with many other topics. So, this series will be limited to the topic of posture immediateloy before and during Holy Communion.

As far as I can tell, the Institutio Generalis Missalis Romani (IGMR), third typical edition, was released in Latin on Holy Thursday 2000.

Interestingly, as early as November of 2000, a question in the form of a dubium (meaning: doubt, hesitation, reservation; to call into question), was answered by His Eminence, Cardinal Medina Estevez, who was the Prefect of the Congregation for Divine Worship and Discipline of the Sacraments (in short, CDW). You may recognize the name of the current Prefect, Francis Cardinal Arinze.

There were two questions raised, in this Responsum ad Dubium1. I have in bold what pertains to a part of our topic.

Dubium 1. Is it the case that the Congregation for Divine Worship and the Discipline of the Sacraments, by No. 43 of the Institutio Generalis Missalis Romani, intends to prohibit the faithful from kneeling during any part of the Mass except during the Consecration, that is, to prohibit the faithful from kneeling after the Agnus Dei and following the reception of Holy Communion?

Dubium 2. Does the Congregation for Divine Worship and the Discipline of the Sacraments intend by Nos. 160-162, 244, or elsewhere in the Institutio Generalis Missalis Romani, that the people may no longer genuflect or bow as a sign of reverence to the Blessed Sacrament immediately before they receive Holy Communion?

So, a clarification was quickly provided by the Holy See which makes it clear that thew newly published IGMR did not intend in any way to prohibit people from bowing or genuflecting before the Blessed Sacrament when receiving Holy Communion.

A reader asks in the comment box of Part One, if I can include genuflection before receiving. In my humble opinion, and someone can correct me, this Protocol seen above, covers that. It would not make sense for any diocese to prohibit something in it's adaptations, that the Vatican says may not be prohibited. Keep in mind, those adaptations must be submitted to the Holy See for approval and as we look at subsequent documentations on the topic, we will look at how various later interpretations mesh with these earlier communications.

You'll have to wait until my next post. This gets more interesting as we unpeel the layers chronologically.

Incidentally, you will see these protocol numbers in letters such as these. The online Catholic Encyclopedia explains Protocols, if this is of interest to you.

NOTE: I had not mentioned it in my earlier post, but will do so now for your benefit. I have several documents lined up for this series, but want to move in a methodical fashion. Comments are welcome, but I prefer not to publish those which contain information I have not yet gotten to in our sequence. My experience in debating this issue with people, is that the sequence of events is important and therefore, I don't want to put the horse before the cart.

If someone sees an error in any of these posts, by all means, please email me at TeDeumBlog@aol.com or drop a clarification in the combox. This kind of exercise is always a learning experience for me too.

Posted by Diane Korzeniewski at 8:57 AM