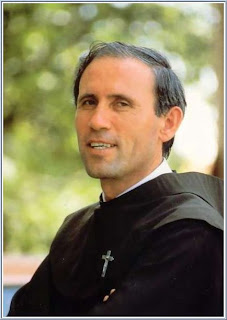 I mean, after seeing an Italian video, and a transcript, I don't know what else to think other than, Tomislav Vlasic has lost it, and he is in need of serious prayer.

Vlasic is considered by some, including the Diocese of Mostar-Duvno, to be a central figure in the phenomena of Medjugorje.

A little, recent background is in order.  In 2008, then Archbishop Amato, Secretary of the CDF, said Tomislav was being studied by his dicastry, "within the context of the phenomenon of Medjugorje...".  Scroll in this post by Italian Medjugorje researcher, Marco Corvaglia, to:  § 5. Medjugorje and the New Age: Tomislav Vlasic.  Copying of text is disabled, but if you click that link go to that section, it will take only a few minutes. I would encourage you to read the entire post.  Marco has been doing detailed analysis for years and provides his research in multiple languages.

Marco shares new video of Tomislav Vlasic, and he provides a partial translation (I couldn't bare more than was shared).   In the video, Vlasic, along with a woman named Stefania Caterina, claims to be part of a group called  the "Central Nucleus".  In short, it ain't Catholic!   I got lost-in-space around  "Alpha Centauri."

Let's step back to May 30, 2008. Then Archbishop Angelo Amato, who was the Secretary of the CDF, sent a letter to Bishop Peric, authorizing him to share the canonical status of Tomislav Vlasic.  Here is what we find on the Diocese of Mostar Duvno website, published on August 31, 2008.  Read carefully, because this is the Holy See stating he was being investigated, "in the context of Medjugorje".  Emphasis mine in bold; added emphasis in italics.

“Within the context of the phenomenon Medjugorje, this Dicastery is studying the case of Father Tomislav VLASIC OFM, originally from that region and the founder of the association ‘Kraljice mira potpuno Tvoji – po Mariji k Isusu’.


On 25 January 2008, through a properly issued Decree, this Dicastery imposed severe cautionary and disciplinary measures on Fr. Vlasic.


The non-groundless news that reached this Congregation reveals that the religious priest in question did not respond, even partially, to the demands of ecclesiastical obedience required by the very delicate situation he finds himself in, justifying himself by citing his zealous activity in the Diocese of Mostar-Duvno and surrounding territories, in initiating religious activities, buildings, etc.


Since Fr. Vlasic has fallen into a censure of interdict latae sententiae reserved to this Dicastery, I kindly ask Your Excellency, for the good of the faithful, to inform the community of the canonical status of Fr. Vlasic and at the same time to report on the situation in question…”.

Preceding a list of pretty severe sanctions, was this:

The Decree of the Congregation mentions that Rev. Fr. Tomislav Vlašić, a cleric of the Franciscan Minor Order – the founder of the association ‘Kraljice mira potpuno Tvoji – po Mariji k Isusu’ and who is involved in the “phenomenon Medjugorje” – has been reported to the Congregation “for the diffusion of dubious doctrine, manipulation of consciences, suspect mysticism*, disobedience towards legitimately issued orders and chargescontra sextum.”

In that same letter is a list of sanctions.  Among them, it seems the Holy See was concerned with his understanding of theology:

4. A mandatory course of theological-spiritual formation, with a final evaluation along with a prior recognitio of this Congregation, and a solemn professio fidei;

Based on Marco's translation of that video embedded in the post I provided at the top, we learn from Stefania, that she and Tomislav were, "called to this task more than ten years ago".  That means he was dabbling in this new-age planetary gumbo long before the Holy See launched it's formal investigation of his activities.  No wonder they wanted him to take a remedial course in theology, pass a test, and make a profession of faith.  Good grief!

Medjugorje protagonists were quick to distance Vlasic from the phenomena, claiming he pretty much had nothing to do with what was going on in Medjugorje.  We might ask, then, why would the CDF say he was being investigated, "in the context of Medjugorje?"  Moreover, the Diocese of Mostar-Duvno offers proofs of his involvement, including notes from the baptismal registry in the early days of the alleged apparitions.  See: Fra Tomislav Vlasic, OFM in the context of the Medjugorje phenomenon.  What is important to know as we go forward is that the Holy See's Medjugorje Commission is the fact-finder in the case.   Both Cardinal Levada and Cardinal Amato, both of whom signed that letter, are on the Commission.

Fast forward to 2009.  We learn that Vlasic requested laicization and it was granted.  In March of that year, the Holy Father dispensed him from his Franciscan vows, and from his priestly obligations, including celibacy.

In the decree we find the following:

As a salutary penal precept - under the pain of excommunication which the Holy See would declare, and if necessary, without prior canonical warning - the following precepts are imposed on Mr. Tomislav Vlasic:

a) Absolute prohibition from exercising any form of apostolate (for example, promoting public or private devotion, teaching Christian doctrine, spiritual direction, participation in lay associations, etc.) as well as of acquiring and administering goods intended for pious purposes;

b) Absolute prohibition from releasing declarations on religious matters, especially regarding the "phenomenon of Medjugorje";

c) Absolute prohibition from residing in houses of the Order of Friars Minor.

He obviously is not acting as a Catholic in that video, but I'm wondering if the Holy See will make it official with a declaration.

I am also wondering what some pro-Medjugorje, Vlasic defenders think when they see this.  If you read this involved post by Louis Belanger very carefully, you will see that some are willing to trash a Catholic bishop to defend Vlasic, and Medjugorje.

What must the Blessed Virgin Mary think?  And according to the lady of Medjugorje, she said decades ago, "Thank Tomislav very much. He is guiding you so well"

UPDATE 1: The "Central Nucleus" promotes Medjugorje and with Tomislav's involvement, I can't help but wonder just what kind of spirit is being channeled here.  (H-T to commenter Nick, who thought to look for the website).  Here's one excerpt from a section entitled: Message of Saint Michael the Archangel – September 10, 2010, The Central Nucleus

"...The members of the Central Nucleus that belong to the Earth are bound in a special way to three places on Earth, which are fundamental for the work of God and they are: Jerusalem, the Basilica of St. Peter’s in Rome, and Medjugorje. In all the places in the universe that are important for God’s plan, as these three, the Central Nucleus acts in spirit, in a direct and specific manner. ‪Moreover, these places are entrusted in a special way to the prayer and the offering of the members of the Central Nucleus.
‪The Central Nucleus is not a structure like you conceive it on Earth. ‪It was formed and lives according to the laws of the Spirit, it is an instrument in the hands of God. It is also the model for all other nuclei that are being formed in God’s people; every nucleus will live according to the laws of the Spirit and will not be comparable to any structure you know. Those who are willing to live according to the laws of God without compromise, cunning, and ambition will be part of it."

So much for Tomislav respecting those precepts he was suppose to be honoring, "under pain of excommunication".

Folks, this isn't just dodgy, it's potentially diabolical. What they are attempting to do is lure people away from the authentic shepherd's of the Church by creating a pseudo-magisterium - one which answers to no one but themselves.  Don't fall for this crap.

What you have here are a group of people who answer to no one but themselves.  They are their own magisterium and their own "pope".

I've long had a theory that when someone goes off the rail, God tries to protect as many of the faithful as possible by having the wayward person do something so outrageous that most will turn and run the other way.  This is a perfect example.  The gullible folks that will get lured in by this are the poor souls who either haven't been catechized sufficiently or properly, or who have rejected attempts to be catechized.


The obedient are not held captive by Holy Mother Church; it is the disobedient who are held captive by the world!
Note: The recommended links below are automatically generated by the tool, so they are not necessarily related content.
Posted by Diane Korzeniewski at 12:03 AM