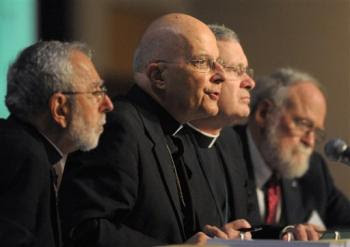 Some 300 bishops are in Baltimore meeting as they do each year at this time, and there is much to pass along. Unfortunately, I finally sat down to write this post and it is already 9:43pm.

So, I have no choice but to leave you with coverage from others.

Rocco Palmo is an American Catholic reporter for The Tablet - an international Catholic weekly published in London. On his blog, Whispers in the Loggia, Rocco gives us a play-by-play, so if you want to know what is going on throughout the day, check his blog.

The first thing I want to draw your attention to is a paragraph from plenary session address by USCCB chief, Cardinal Francis George, OMI, of Chicago, who took the helm last year (emphasis mine in bold). I recommend reading the entire address to give this paragraph context and to read a few other gems I don't have time to sift through.

In working for the common good of our society, racial justice is one pillar of our social doctrine. Economic justice, especially for the poor both here and abroad, is another. But the Church comes also and always and everywhere with the memory, the conviction, that the Eternal Word of God became man, took flesh in the womb of the Virgin Mary, nine months before Jesus was born in Bethlehem. This truth is celebrated in our liturgy because it is branded into our spirit. The common good can never be adequately incarnated in any society when those waiting to be born can be legally killed at choice. If the Supreme Court’s Dred Scott decision that African Americans were other people’s property and somehow less than persons were still settled constitutional law, Mr. Obama would not be president of the United States. Today, as was the case a hundred and fifty years ago, common ground cannot be found by destroying the common good.

Rocco noted earlier that Bishop Martino of Scranton was in the building. What is the significance of this? Well, Bishop Martino was not present at last years assembly. Just before the presidential election this year, he crashed a forum held on diocesan property in which some members of the faith were explaining how Catholics could vote for Obama. Calling it "madness", he admonished those present, duly catechizing them and said the USCCB doesn't speak for him and that his statement, clarifying Catholic teaching on voting was the authoritative document. A collective gasp and cheer could be heard from sea-to-shining-sea, that a bishop would act like.....well, a bishop.

There was a press conference that followed at 12:30pm, which Rocco also summarized. In a 30 minute video (click here and pick your speed), the bishops fielded only one liturgical question near the end. The other questions were on the campaign. If you have heard or read other accounts of what was said, I urge you to watch the video and judge for yourself.

WHAT'S GOING ON WITH OUR BISHOPS?
It's important to note that when the bishops were trying to prevent the situation we are in - dealing with a highly pro-abort presidential candidate, their language was much more forceful. Some are puzzled at the soft, and seemingly back-pedaling language now that Barack Obama is president-elect.

A couple of things to keep in mind: 1) The bishops have not had time to get their arms around the matter collectively. Some will feel strong about taking firm actions while others will still want to play [to] nice and, 2) Barack Obama IS the next US President and he doesn't have to listen to any group. He can make it look like he's listening, but he doesn't have to hear a thing.

The bishops have entered a new stage now - a diplomatic stage - and that is what they are setting up with the words and tone that you hear. When you read Cardinal George's statement in full that I provided, you will see that he gets it and is not going to compromise (read it a few times if you must). But, he doesn't want to have the door slammed in his face either. If you read the Holy Father's words, he is doing the same. They must keep the door open for diplomacy and their speech will now reflect that. There is a fine line they must walk now in getting Barack Obama to not only listen, but to hear. It won't happen with the verbal equivalent of a baseball bat.

ACORN AND CCHD
Something also noteworthy is that the bishops will discuss the matter of ACORN. The USCCB hired a forensic accountant to review contributions from Catholic Campaign for Human Development to the whacky community organizing group that endorsed Obama (even though it is supposedly non-partisan). Rocco reports:

The plenary's final public agenda-item late tomorrow afternoon will be a discussion of the Catholic Campaign for Human Development's relation to ACORN, the recently under-fire community organization. Due to the packed schedule -- which also includes reports on the recent Synod of Bishops and post-Hurricane Ike relief efforts in the Gulf Coast -- a later-than-usual end of session is expected.

In his Day One, Evening Wrap, Rocco provides a few excerpts from the day found in various publications who have representatives there covering the event. It's interesting to watch the video link I provided earlier, to read the statement by Cardinal George, and then to see the spin in some of those publications.

Now, GO PRAY FOR THE BISHOPS!!!

More from the USCCB meeting in Baltimore: